As part of TaylorMade’s 2019 message, ‘everybody gets faster’, we invited two lucky competition winners to the McGuirks Fitting facility at Leopardstown Golf Centre to put the club manufacturer’s promise to the test.

Following our recent competition, it was Charlie Blacque from The Island Golf Club and Gary Leahy from Corballis Golf Links who both won a custom fit session for the new TaylorMade M5 and M6 Drivers.

With Trackman technology on site at McGuirks Golf Centre and a variety of different shafts and clubheads to test, both Charlie and Gary got the chance to try an array of offerings with the results of each ball hit collected instantly on screen for on-site analysis. Twelve-handicapper Charlie’s own ‘off the shelf’ R1 was more often than not sending his ball right, going right, while 20 handicapper Gary’s Ping G30 was prone to a wild slice or top-ball. So it was up to TaylorMade club technician, Garth Boyd to step in and save the day.

Charlie arrived in the hopes of increasing his ball-flight to avail of some extra carry, with Gary wishing to leave with an enhanced consistency in his game and TaylorMade fitter Boyd discovered some interesting results.

“Charlie’s tendency was to get a little bit low in terms of the spin and he struggled to get his ball in the air – his launch angle was a bit low,” reflected Boyd. “What we decided to do was stick him in an M6 driver at 10.5 degrees and we added a bit of loft to make it 12.5 degrees. The total distance gain was 10 yards but the big benefit was the carry, up 17 yards relative to the R1.”

Having never been fitted for a golf club before, Charlie was surprised but hugely pleased with the results.
“Garth’s very knowledgeable,” said Charlie. “I think it will give me a lot more carry so on reflection, it’s a bit of a no brainer really to get fit.  To see on screen exactly how far the ball is carrying as opposed to what you currently have and to understand why it’s carrying that bit further is all very positive for my game going forward.”

With a tough act to follow, Gary’s bogey shot, a high slice, quickly presented itself and after trying multiple shaft options, TaylorMade’s Boyd eventually landed on a solution.

“We set Gary up with an M6 Driver at 9 degrees but cranked it to 10.5 degrees which played the same loft but closed the face angle ever so slightly, helping to eliminate the one flying off to the right,” Boyd surmised.

“It’s going straight in the bag,” Gary said. “There’s no point putting in the work to get something suited to me and then leaving it in the corner of the press. I’m going home very happy.” 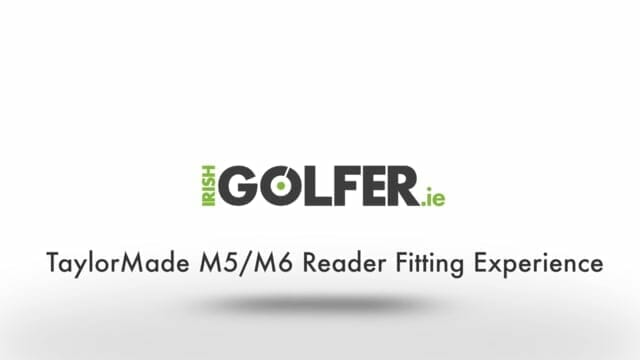 McGuirks Golf operate 12 different fitting outlets nationwide, all equipped with the latest Trackman technology with trained custom fit specialists in every store. Having seen the work of the team first-hand and the results the process can produce, we believe that if you’ve got a need for speed in 2019, you should get custom fit.

Both new TaylorMade M5 and M6 drivers are available now at all TaylorMade stockists nationwide.