Lowry makes the weekend after brilliant beachfront par save

Shane Lowry pulled-off the par saves of all par saves from the Kiawah Island beachfront on day two of the 103rd PGA Championship.

Lowry’s brilliant par near mid-round, coming after he’d dropped a shot the hole before, helped the Clara golfer post a one-under par 70 and get back to level par for the tournament in increasingly windy conditions in South Carolina.

The reigning Open Champion ended his round just outside the top-20 and tied in the clubhouse with fellow Irishman Padraig Harrington.

Lowry’s drive off the par-5 16th was way right, clearing the line of spectators and coming to rest against a small fence-like structure you see on many beaches that act as a windbreaker and also buried deep in the Atlantic Ocean shoreline.

Fortunately, the beachfront is deemed in-bounds with Lowry afforded a free drop, given he could not swing at the ball.

As Lowry spoke with the rules official, his caddy Bo Martin pulled out the rangefinder and headed back to the edge of the fairway to get a distance to the flag.

Lowry, allowed to ground his club as you are in all Kiawah sandy areas, played his second and then threw his bag on his shoulder before Martin came back down the sandy slope with news the ball was back on the fairway.

He went on to land his fourth some 21-feet from the flag from where Lowry pulled off the pars of all pars.

“It’s funny as I saw a picture of Rory out there in the practice rounds from that area, and I was trying to figure out where it was,” said Lowry smiling.

“So I got very lucky there because where I hit my provisional wasn’t very good either. It could have been anything. I got lucky and managed to make an unbelievable par. 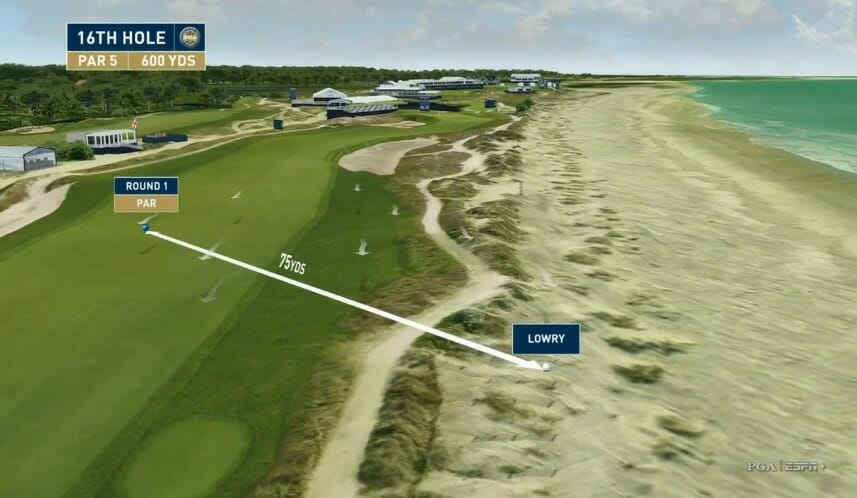 “It was one of those situations where I found my ball and was able to get relief and got it back in play, so it was like I had made a ‘6’ but thankfully it was a ‘5’.

“On this course if your mistakes are bogeys, you’ll do okay, because you will give yourself a few chances. But I just wanted to try and make bogey or par and move on to the next, and I managed — I did”.

And it prompted Lowry to be quizzed if he’s ever played a similar shot off any of the Irish links gems.

Lowry had earlier birdied his opening two holes and after a birdie at his sixth he went into his back nine to produce two birdies, at his 11th and 16th holes and bogeys on 10 and 15.

Given the toughness of the conditions, Lowry says he’s drawing heavily on the support of his Royal Portrush winning caddy, Bo Martin.

“That’s what Bo’s been doing. He’s been doing a good job this week so far, so we’ll see how it goes this PGA weekend. But yeah, you do need — look, we all have our own relationships with our caddies. I’ve got a very good one with Bo. You need someone to lean on out there, especially in big weeks.

“And if I make a run at it this weekend, that’s when you’re going to need him most, so we’ll see how it goes”.

Lowry paid new BetFred British Masters champion, Richard Bland a huge compliment and declared he, like so many, also had a tear in his eye in seeing the Englishman end a 478th European Tour winless drought to win at the famed Belfry course.

“It was an amazing story last week, and I couldn’t actually get away from the TV watching Richard Bland win in Europe,” said Lowry.

“I actually listened to his interview, and watching him and Tim Barter, I nearly had tears in my eyes watching. It was amazing.

“So, that is what’s great about the game of golf”.