Meadow off to a fast start in the desert

Stephanie Meadow opened with a three-under-par 69 in the desert for the Bank of Hope Founders Cup in Phoenix.

Meadow carded birdies at the fifth, seventh, eighth and 12th at Wildfire Golf Club before a bogey at the 16th took a little of the gloss of an otherwise excellent day.
four shots behind Jane Park, Michelle Wie and Vicky Hurst, who shot seven-under-par 65s to take the early clubhouse lead.

Meadow lies four shots off the top of a jammed leaderboard with four players tied for the lead.
Americans Stacy Lewis, Sandra Changkija and Katie Burnett, Korean native In Gee Chun, and Thailand’s Ariya Jutanugarn all played Wildfire Golf Club at 8-under-par 64 .
With the high temperature nearing 90 degrees Fahrenheit, players battled the heat all day and will have to do so the rest of the week.

Lewis, who has finished in the top five of this event in each of the last four years including a win in 2013, is playing well early this season and looking for her first win since 2014. She started her first round going out in 29 but the putts dried up on the back 9. 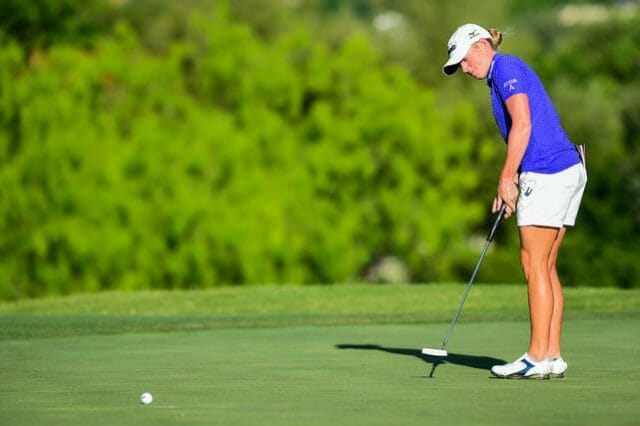 “I got off to a great start. That was the beginning,” said Lewis. “Just making some putts early; hitting a lot of good shots, and great putt on 8; 9 was awesome. The 9-iron was perfect in the air. Nice to see it go in.

“You kind of start thinking a little bit about what you’re shooting at that point but just tried to keep hitting good shots. I did that, for the most part, most of the day. If you’d tell me at the beginning of the day I would shoot 8-under, I would take it anytime.”