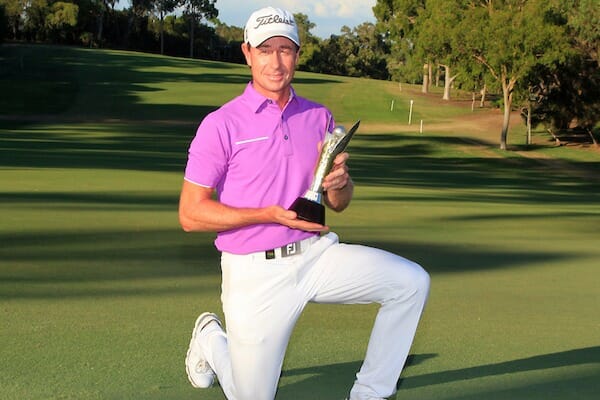 Rumford was the runaway strokeplay leader heading in the the final round of 24-man matchplay in the final of the first ever staging of the Super 6  tournament on the European Tour.

An all-action final day began with 24 players battling it out in a new six-hole match-play format culminated in a final featuring the leader of the strokeplay qualifier and the 24th and last man to make it into the final day – Khongwatmai having fought to the bitter end in an eight-man play-off late Saturday evening.

Rumford’s compatriots Adam Bland and Jason Scrivener fought it out in the play-off for third spot, with the former emerging victorious, while 2010 Open Champion Louis Oosthuizen finished in fifth position.

Rumford said, “It’s amazing. It’s just great to be back with what I feel is my second family at the European Tour. It’s been a pretty tough road, last year was pretty tough. The year before that was even tougher with my surgery. So only seeing my daughters, my twin girls, for four weeks and six months, I completely fell out of love with the game and sort of my direction in life and everything else that goes with it.”

“I just think it’s been a great format and a great week. Whether this can actually work elsewhere, I think you’d have to be quite selective about golf courses that could cater for this, but this one works”, he added.

Share
Facebook
Twitter
WhatsApp
Linkedin
Email
Print
Previous articleGUI empowers clubs and embraces major change
Next articleDJ takes over as World No. 1 but just wants to go back to bed