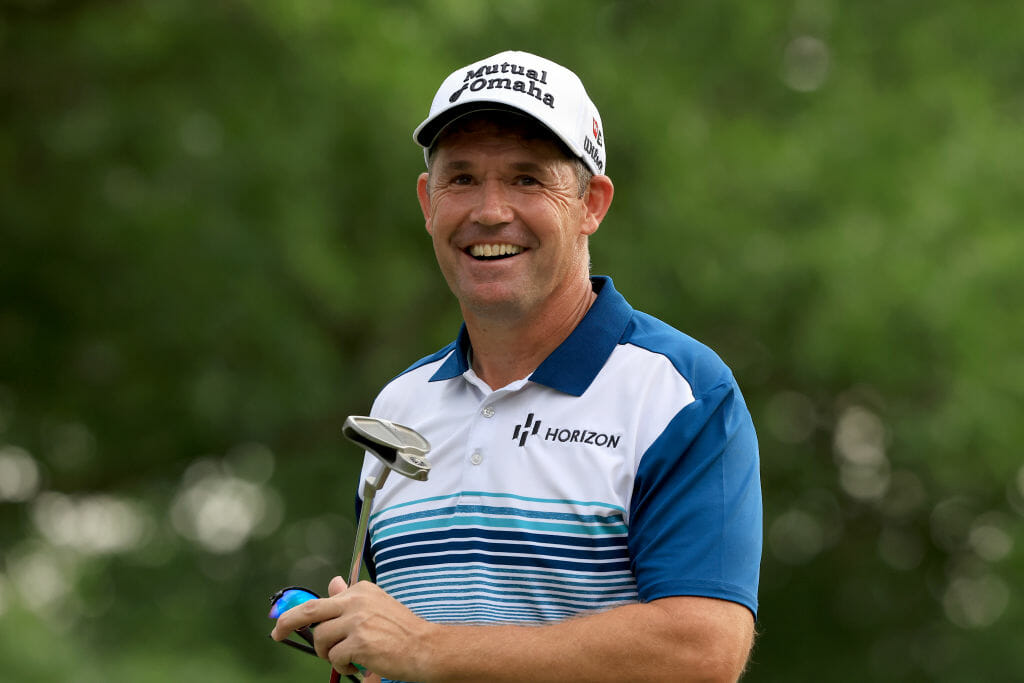 Pádraig Harrington has revealed that some players have turned down $30 million advances to join the LIV Golf Tour.

Harrington was speaking to the media in a virtual press conference following his win at the 42nd US Senior Open on Sunday night in Saucon Valley and he admitted that some of his Ryder Cup players have rejected the lucrative offers from the Saudi backed tour while he has not received an offer himself to join fellow Ryder Cup legends Ian Poulter, Sergio Garcia, Lee Westwood, Graeme McDowell and Martin Kaymer.

“As much as the media talks about the players who have gone, some of the players who haven’t gone don’t get enough credit, we’re not talking the very, very top, we’re talking about sort of the type of Ryder Cup player who’s turned down the $30 million plus figures.

“It’s very impressive that at the moment it seems like the players who are staying are the ones who are feeling like their careers are going on an upward spiral, that they’re protecting their fear of wanting — not protecting, they want to win the majors, and they think that’s their future.

“So that seems to be the way it is, that the guys who are staying and fair play to them for turning it down and backing their careers. The other guys, it’s big money on the table. When you’ve got skin in the game like that, I personally have not had an offer, good, bad or indifferent on either side of this, so I don’t have skin in the game to make a judgment on how you would feel about it, but I’m certainly impressed with some of the players who have turned down large sums of money.

“It does kind of say something about how they think about their own games. That’s for sure,” added the three-time major winner.

The 2020 Ryder Cup captain also expressed concerns that while the PGA Tour and LIV could co-exist, he struggles to see where the DP World Tour fits in despite the PGA and DP World Tours expanding their alliance where the former will increase its stake in European events from 15 to 40 percent.

“LIV looks like it’s going to be here to stay. In three, four, five years’ time, all of this could be very normalized, and there could be the U.S. Tour and the LIV Tour sort of thing, contending for the hearts and minds of the players.

“Yeah, competition definitely pushes things on as we’ve seen with the PGA TOUR. Let’s hope that the European Tour can keep up. The pathway I would have had to where I was in golf was very dependent on the European Tour. I really built my game from ’96 to 2004 on the European Tour, getting high enough up in the World Rankings that I could play the big events around the world, and then being able to dip my toe in the water sort of thing and experience those events before I then took my card in 2005 on the PGA TOUR, which is a big step for any young guy going over there. You’re thrown out of your comfort zone. It’s new. The lifestyle is new, the environment is new. You really want to be on top form.

“Europe has a great ability for players who stay there. We’ve seen greats who play in Europe over the years. It really does help develop a player in a protected environment in the sense of you’re a top player in Europe, you’re getting the right TV draws, you’re getting treated like a star, which means when you go — oftentimes as you remember when Monty went to the States, he was getting first or last tee times. He was putting the flags out or taking them in when he was No. 1 in the world, and that can be soul destroying for a player.

“So we do need a very strong European Tour, and it is interesting. The European Tour is the one that could get squeezed out in this battle. The PGA TOUR is a giant in this whole thing, and LIV are coming in there to do battle with them, and is there only enough room in golf for two big players and everybody else has to take a backseat?” added Harrington who will look to add to his 2007 Irish Open title this week.

With current Ryder Cup captain Henrik Stenson mooted to be in talks with Greg Norman and LIV thus creating a scenario where he would have to give up his captaincy, Harrington suggested that the conflict could add a new dimension to the Ryder Cup and rekindle a certain edge that the biennial contest had when he made his debut in 1999.

“Yeah, you know, obviously if there’s two big tours, it seems to be good for the majors, that the only time the best players would play is in the majors. That served the Ryder Cup really well over the years in the sense of if there was a rivalry between Europe and the U.S., like if I go back to when I played in ’99, I didn’t know the U.S. players. I had to be introduced. There was all sorts of conspiracy theories during the matches and things like that, whereas now we all play the same tournaments, so we’re all quite friendly.

“Yeah, look, it could add spice to the Ryder Cup, but I don’t know how that’s going to end up in terms of whether the players can play or certainly with the captains and vice captains. It really is hard to know what is going to be the future of it.

“As I said, time will normalize things. There’s no doubt about that. But it is very much up in the air at the moment, and we’ll have to wait and see what certainly the LIV Tour seem to have. They seem to have — how will I put this? A point to prove that they can go and do it.

“I think the fact that maybe when they were with PGL they were kind of turned away, now whether it’s Greg who’s always wanted this world tour or the LIV Tour itself, if they have commitment to do it, it looks like they will get it done in some shape or form,” he added.