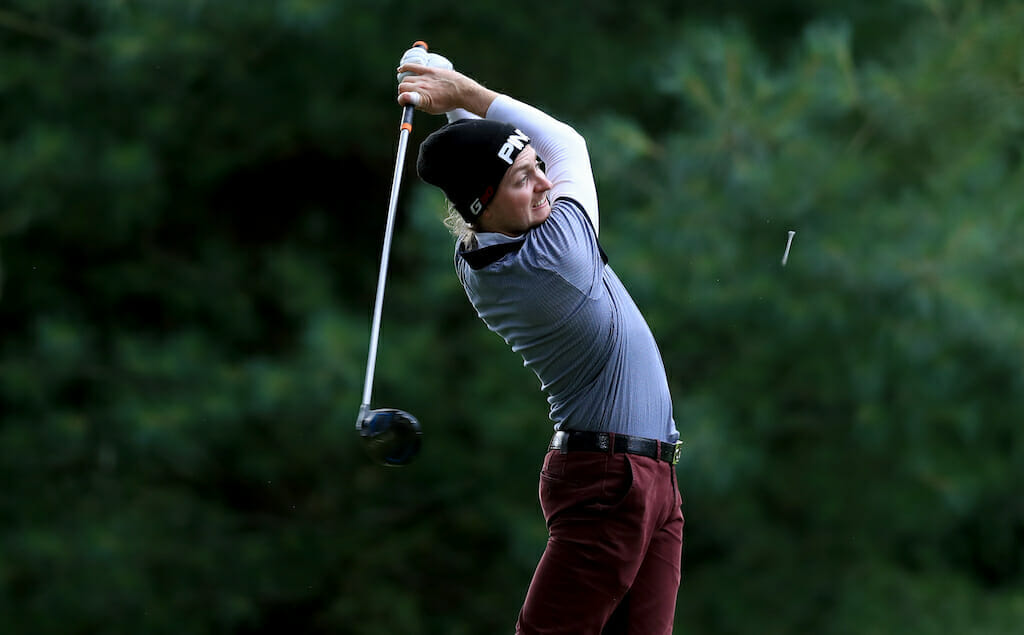 David Carey and Ronan Mullarney will both make their Major debuts at The Open Championship at St Andrews after both progressed through Final Qualifying to book their places in the field in two weeks’ time.

With four places on offer at four venues, Carey comfortably sealed his spot as he finished top of the qualifier at Fairmont St Andrews by four shots after two stunning rounds on the Scottish links, while Galway’s Mullarney claimed second spot at Prince’s in Kent.

Carey was particularly impressive in the howling wind and driving rain at St Andrews, carding four birdies in a fantastic bogey-free four-under 68 in his opening round in the morning, then backing it up in the afternoon with an eagle, three birdies and two bogeys in a three-under 69 to post the target at seven-under.

The Darwin Escapes sponsored player would cap off his second round by draining a monster 50-foot putt for birdie to sign off in style and punch his ticket back to St Andrews in two weeks’ time for what will be his first event above Challenge Tour level since he turned professional in 2017.

The Irishman has finished in the top-20 in four of his last seven starts on the Alps Tour but will now make the step-up for the biggest event of his career when he makes his Major debut at the world-famous Old Course.

“I’m very big on my golf history,” said Carey. “I have been saying to everybody for the last three months that I wanted to play in The 150th Open at St Andrews, so this is special.

“I went to the Old Course for the first time yesterday and walked around the first, second, 17th and 18th. I just had a look around the place and that was maybe the extra inspiration for me.

“That was the first time I’d seen it and it is so cool to be able to walk it and see the stands and just look at everything.

“Today I was just trying to stay patient and do the simple things. I’ve been playing well the last few weeks. I’ve had a lot of solid scores without anything amazing, so I felt like I had been close to a really good week.”

He was joined in progressing from St Andrews by England’s Robert Dinwiddie, who finished solo second at three-under-par, with Alex Wrigley and Lars van Meijel holding their nerve in a three-way play-off with former Scottish Open champion Aaron Rai to claim the final spot.

Ballymena’s Dermot McElroy came closest to joining Carey in progressing in Scotland, missing out on the play-off by three shots as rounds of 74 and 71 saw him finish one-over-par, with Kinsale’s John Murphy the next best at five-over-par.

In the same vein as Carey, Mullarney has never played above the second tier in his career but will make also his Major bow in Scotland after he sealed runner-up spot at Prince’s thanks to rounds of 70 and 71 to finish three-under.

The Galway man started strongly with three birdies and one bogey in his two-under round in the morning, but it was two late birdies in his second round that allowed him to avoid a play-off for the final place as a one-under 71 got him into the clubhouse in solo second.

He was beaten only by England’s Matthew Ford, who finished at four-under-par, with Jamie Rutherford matching Mullarney at two-under for the third spot and Jack Floydd triumphing in a five-way play-off for the other place.

Hermitage’s Rowan Lester, the only other Irishman competing at Prince’s, had given himself a real chance after opening with a three-under 69 but finished tied for 33rd at four-over after cratering to a seven-over second round 79.

Castle amateur Robert Moran also came close in the Final Qualifier at St Annes Old Links as he opened with a one-under 69 to put himself up near the top of the leaderboard, but a two-under 68 in his afternoon round wasn’t enough as he missed out on a play-off by three shots.

Impressive 15-year-old Roganstown amateur Seán Keeling’s Open dream was dashed at the same venue as a four-over 74 left him with too much work to do in the afternoon, and a level-par 70 left him four-over-par and in a share of 21st.

England’s Marcus Armitage and amateur Sam Bairstow finished top of the St Annes qualifier at eight-under-par to claim their spots at St Andrews, and they were joined by Matthew Jordan, who was third at seven-under, and John Parry, who defeated Daniel Kay in a play-off after both finished six-under.