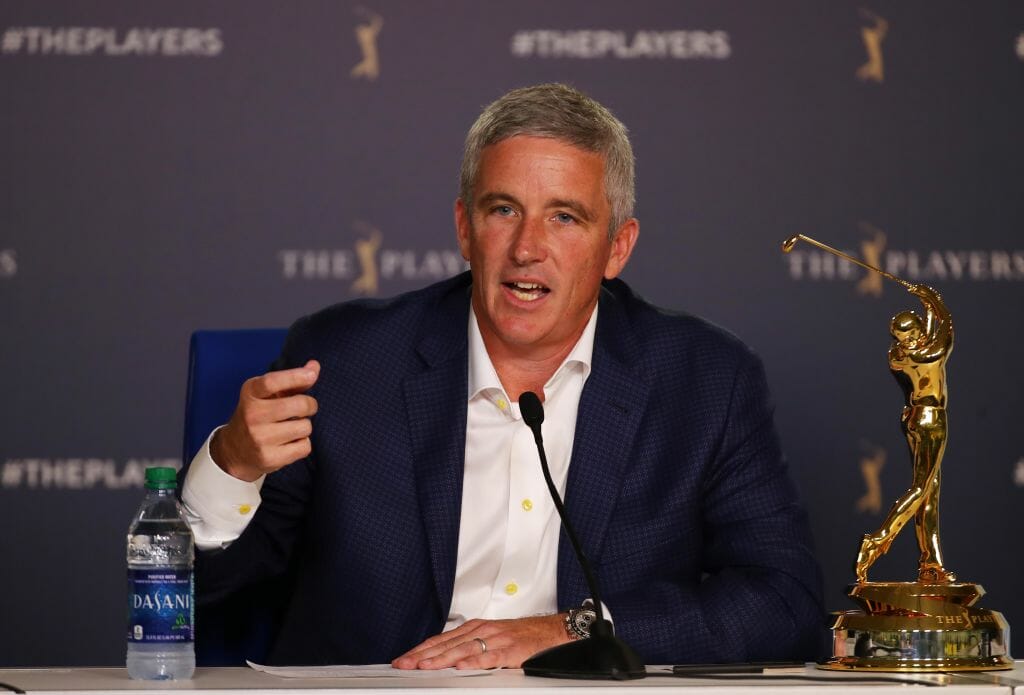 It was a late one for those of us who stayed up to watch Webb Simpson win the RBC-Heritage championship but pictures of the smiling American draped in his red tartan victory jacket do little to paint over what must’ve been the squeakiest of bum times for PGA Tour Commissioner, Jay Monahan over the weekend.

Hats off to the Tour for completing all four rounds of the championship after Nick Watney’s positive test for Covid-19 and commiserations to Bison DeChambeau who’s 0 from 2 since the world of golf got its knickers in a twist thinking he was going to eat his way to global dominance.

But seriously, how did the Tour manage to get through the weekend so seamlessly after making such a hames of things on Friday? I mean, surely, somewhere in that 37-page Health & Safety document around their return to play protocols there was something to discourage a player showing signs of Covid-19 from wandering around the putting green?

The PGA Tour’s initial statement was as dumbfounding as it was incriminating following Watney’s result:

“On Friday, prior to arriving at the tournament, he indicated he had symptoms consistent with the illness and after consulting with a physician, was administered a test and found to be positive.”

So, was he at the golf course or not?

The question was soon answered when Rory McIlroy admitted to meeting Watney on the practice ground. Which means, Watney complained of having symptoms for the virus, got tested and then went through his pre-round practice routine, mingling with players like it was any other day before the test results came back positive.

It begs the question, how was a player in Watney’s position allowed to roam free?

11 subsequent, negative tests occurred in relation to the wandering Watney but interestingly, McIlroy wasn’t one of them.

Asked by reporters if he had a test, McIlroy said, “No, I didn’t. I didn’t feel like I was in close enough proximity, and I wasn’t feeling any symptoms. I feel totally fine. No, I saw him on the putting green, and we kept our distance, and that was it.”

But who’s to say his symptoms have yet to show, or that McIlroy is asymptomatic, or that Watney wasn’t telling the one about Peter Piper picking a peck of pickled peppers and a loose speck of spittle took flight in the breeze and took aim at the world number one?

Data suggests that 80% of infections are mild or asymptomatic so it’s not beyond the realms of possibility that those who contacted Watney could test positive down the track.

As stringent as the PGA Tour would have us believe things are on site, spitting, questionable social distancing and fist-pumping have been just some of the human responses to a lifetime of habits on display since the June 11th restart. And it’s not like players lie prone, tied to PGA Tour beds between tournament rounds either.

The real worry for the game’s continuation is that while pictures of serenity are pumped through our screens via PGA Tour productions, news channels are showing images of a much bleaker reality elsewhere in the US.

Justin Thomas described the scene around the Hilton Head course as “an absolute zoo” this past week, saying, “No offence to Hilton Head, but they’re seeming to not take it very seriously. It’s an absolute zoo around here. There are people everywhere. The beaches are absolutely packed, every restaurant from what I’ve seen when I’ve been driving by is absolutely crowded.”

And those claims are backed-up by hard evidence as virus records continue to tumble across the Atlantic. 11 States reported record numbers of new cases this past weekend while US President Donald Trump, before a packed rally of his die-hard minions in Tulsa, Oklahoma admitted he urged his people “to slow the testing down, please”, perhaps to cover-up just how inept the US response has been to the global pandemic.

Don’t get me wrong, the last thing I need as a golf writer is no golf. Plucking stories from the skies since the March 12th Players Championship was cancelled has been tedious but given how the virus has escalated in recent weeks in the US, it’s hard to see how the Tour is in a better position now than it was when pulling the plug at the year’s so-called fifth Major.

We roll on this week to the Travelers Championship where the Tour has promised to ramp-up testing to cover all media and volunteers but try as they might to stem the tide in their own circles, what’s happening elsewhere will more than likely penetrate the forcefield around the PGA Tour once more.

It makes you wonder, how many hits can the bubble take before it well and truly bursts?