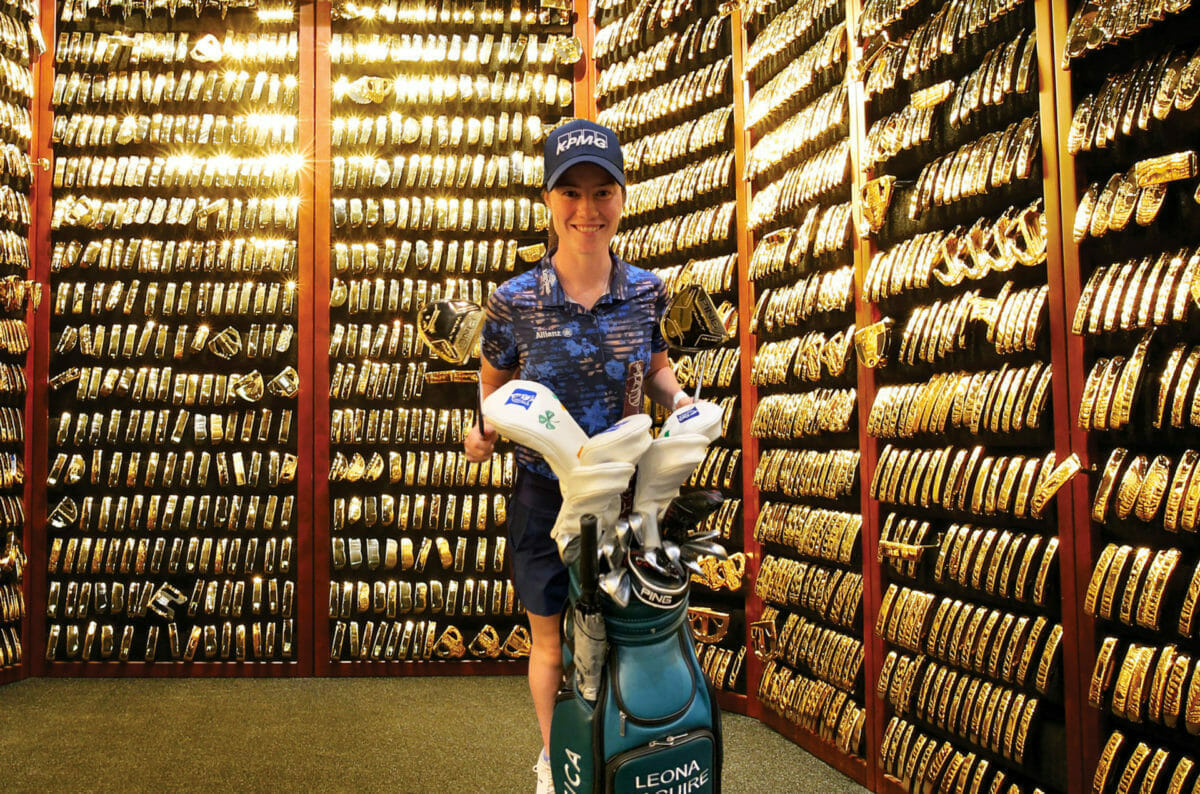 Her season may be on hold in 2020 but with her victories last year on the Symetra Circuit, Leona Maguire joined an exclusive high-security vault – not once, but twice – with her achievements forever cast in gold by equipment manufacturers Ping.

Putters are very collectable, and most of us have more than one tucked away in the garage. But no-one has a collection quite like Ping. It’s so big, it is housed in its own vault. It contains a replica of every Ping putter used to win a tour event since the company was founded in 1959. And each one is coated in gold.

That means the flat stick wielded by Cavan’s Maguire -her Ping Vault Bergen – en route to victory at the Windsor Golf Classic and the Symetra Classic was encased in gold – twice – in joining a tradition spawned in the early 1960s by Ping founder Karsten Solheim.

Solheim felt that a cheque alone wasn’t personal enough and didn’t mean anything once it had been banked. So, he decided that when one of his players won, he’d make two exact copies of the winning putter. He’d engrave both with the player’s name, the event and year and then have them gold plated. He gave one to the player and kept the other for himself.

Now, 57 years on, his collection runs to some 2,830 clubs that all have their own story to tell, with Maguire recently receiving hers at a presentation off the back of a 2019 season that saw her achieve her dream of LPGA Tour promotion.

“This has to be one of the coolest traditions in golf,” said Maguire. “Class to have 2 gold replica putters now added to the special Ping Tour vault to celebrate my pro wins last year. Hopefully we can keep adding to the collection!”

“After a win, you’re usually thinking about getting to go to the Masters and everything that usually comes with a victory. But then you realise you get a gold putter as well. Usually they give it to you some time after the win, so when you get it, it brings back good memories from the week.

“Getting to see your name and tournament win engraved on the face gives it a personal touch that I really like. It’s just so unique.”

When players started winning majors using Ping putters, Karsten thought it needed something extra special to mark the occasion. So, he started to make a solid gold version of those putters. Today, 61 majors down and at a cost of $20,000-$30,000 each, it’s fair to say Ping believes in rewarding those pros who choose to play their equipment.

Bubba Watson received a solid gold Ping Anser 1 Milled for winning the 2014 Masters. It had a head weight of 24.7 ounces and was valued at roughly $30,000.

“As a kid, I heard about the gold putter vault,” Watson said. “I knew it was something cool that you wanted to see. The history of Karsten Solheim and him making the putter, you think about all that and the wins – it’s something you want to see and be a part of. You want to have at least one putter or a wedge in here, so it’s pretty neat to be associated with it now.”

Karsten also believed it was important to recognise key milestones in a player’s career. So special shots with Ping irons and wedges have also been given the gold treatment. There’s the wedge that Bubba Watson curved from the trees to win the 2012 Masters; the Eye 2-iron Mark Calcavecchia hit from a fairway bunker at the 1989 Open at Troon; and the 4-iron Louis Oosthuizen holed with for an albatross two on the second at Augusta.

Ping says each gold-plated putter in the vault comes in at about $600 a pop and they insist on using white cotton gloves to handle each one. The vault has its own keeper, a reinforced safe-style door and requires a code to enter (which is only known by five Ping employees). It’s an incredible place.