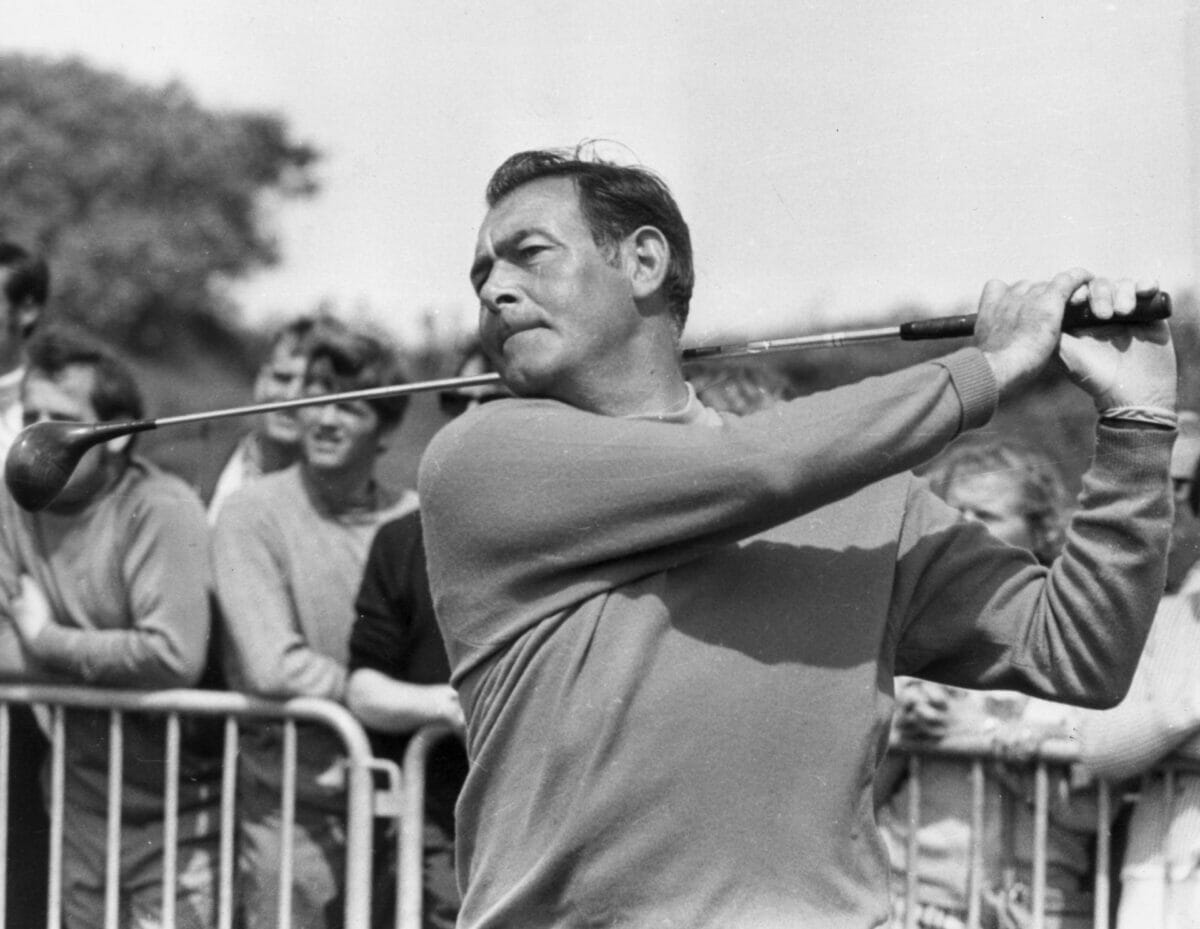 Though Fred Daly was the first Irishman to play on a Ryder Cup team, Christy O’Connor Snr was the first to become a Ryder Cup legend. Until Nick Faldo’s 11th and final Ryder Cup appearance at Valderrama in 1997, Christy’s record of 10 appearances had stood for 24 years.

Born and raised in Knocknacarra, Co. Galway, O’Connor began playing at Galway Golf Club as a youth and quickly became captivated by the game. Though O’Connor would amass ten top-10 finishes at the Open Championship, and a tied second-place finish in 1965, the title he coveted most evaded him.

Known as “himself”, O’Connor would receive 20 invitations from the green jackets at Augusta to come and play in The Masters, but declined each and every time. He would end up making five trips across the Atlantic as part of the Great Britain and Ireland Ryder Cup side, however, the first of which came in 1955.

A month shy of his thirtieth birthday, Christy had qualified after finishing T-10 at the Open Championship earlier that year, and his Ryder Cup debut would take place at Thunderbird Country Club in Southern California.

Not selected to play in the foursomes (in those days there were four 36-hole foursomes matches and eight 36-hole singles matches), O’Connor’s first taste of Ryder Cup action came against Tommy Bolt in the opening singles match on Sunday. It was a baptism of fire for Christy as Bolt, who would go on to win the US Open a few years later, led the first session three-up and couldn’t be reeled in, eventually winning 4-and-2.

Two years later, as the event returned this side of the Atlantic to Lindrick Golf Club in the English North-Midlands, the Americans were going for their eighth successive Ryder Cup win. This time, O’Connor was selected for the foursomes and his partner would be England’s Peter Alliss, who has since gone on to become the most recognisable voice in golf.

In their debut together, O’Connor and Alliss lost narrowly to Doug Ford and Dow Finsterwald as the Americans took a three-one lead and looked set to extend their winning streak. But by the end of the first 18-holes of singles play, it was obvious that this event was going down to the wire. Against Finsterwald again, playing in the penultimate match, O’Connor found himself tied, and with Great Britain and Ireland handsomely up in five and down in two, there was every likelihood that the O’Connor-Finsterwald match would decide the tie.

In the afternoon, Finsterwald, who would soon become the PGA Champion, was thoroughly outplayed by Christy who stormed to a 7-and-6 victory and scored the winning point as the United States handed over the cup for the first time since 1933.

Over the next decade and more, the O’Connor and Alliss combination would become one of the most recognisable in Ryder Cup history, and would only be surpassed by the dynamic Spanish duo of Seve Ballesteros and Jose Maria Olazabel in later years.

As a partnership, O’Connor and Alliss’ finest hours came at Royal Birkdale in 1965, in which greats Billy Casper, Arnold Palmer and Ken Venturi would all fall separately to the Anglo-Irish pair as the format was expanded to include fourball matches and a move to 18-holes. Unfortunately, such was the disparity in the ranks that the pair’s heroics were unable to halt the American express train from making it four-in-a-row.

Though O’Connor’s ten Ryder Cup appearances would yield just one victory in ‘57, one tie in ‘69, and eight defeats, it must be remembered that the American sides were infinitely stronger than their European counterparts, and O’Connor’s career overlapped with those of Sam Snead, Arnold Palmer, Lee Trevino and Jack Nicklaus.

In 1973, now 48, “himself” made his last real challenge for the Claret Jug, finishing seventh, and securing qualification once again for the Ryder Cup. It would be his tenth and final outing in golf’s greatest team event. With his longstanding ally Alliss no longer by his side, O’Connor paired up with fellow Cup veteran Neil Coles to take down Tom Weiskopf and J.C. Snead on the opening morning.

Unfortunately, both O’Connor and his British and Irish teammates were unable to build on a strong opening and though still in with a chance going into the singles, they would lose 8-and-a-half to two-and-a-half in the final session to an all-star American side led by Nicklaus, Palmer, Casper, and Trevino.

As for Christy? He made his final bow by taking a half-point against reigning Open champion Tom Weiskopf. Defeat for Britain and Ireland was a certainty by the time O’Connor’s match reached the final green, but you don’t play in ten Ryder Cups by happily accepting defeat and the old warrior ground out a half.

A fitting farewell for a man whose Ryder Cup career spanned three decades. In some cases, records don’t do the player justice and Christy O’Connor Snr is the embodiment of such.

To achieve legendary status in this era of US dominance is remarkable in itself, but then again, Christy was a remarkable man.