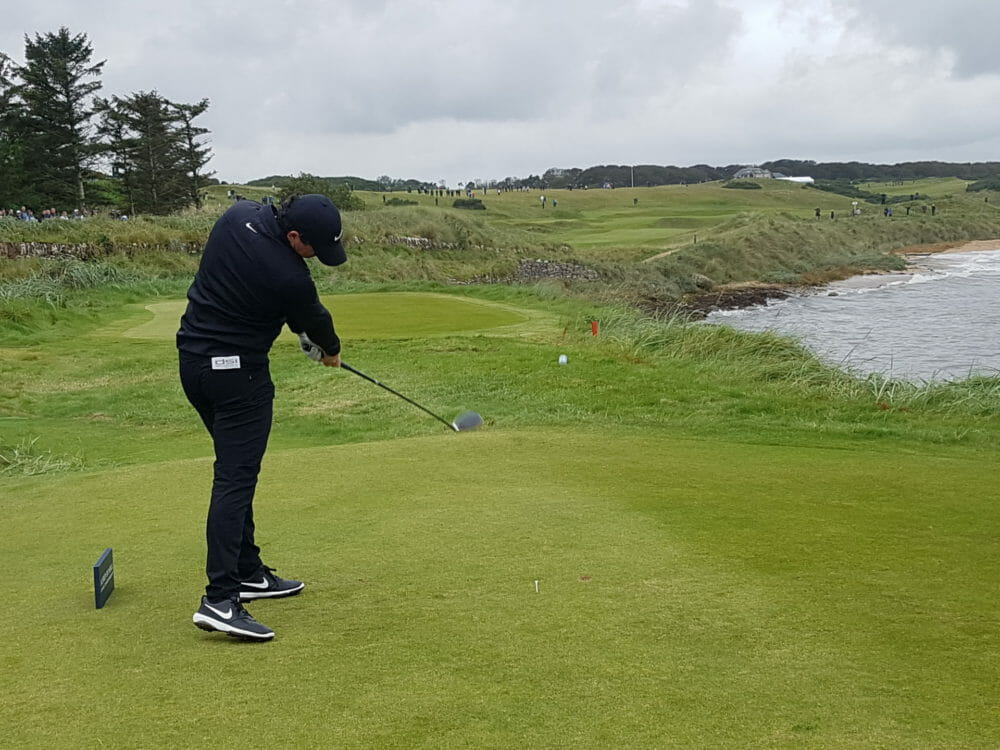 Rory McIlroy clearly had visions of something special racing to five-under par after just five holes only to stall in posting a 66 at Kingsbarns Links on day two of the Alfred Dunhill Links Championship in Scotland.

It left the World No. 2 trailing four shots behind early clubhouse leader Frenchman Victor Perez who added a 68 at Carnoustie to his earlier round of 64 at St. Andrews to move to 12-under par.

England’s Matthew Jordan has since stolen a march on the field at minus-14 but there’s plenty of time for McIlroy who ignited the fireworks right from the outside in grabbing a first hole birdie, sticking his 210-yard second shot to just tap-in distance for an eagle ‘3’ at the par-5 third hole before grabbing birdies at four and five for a then share of eighth place in the Euro 4.5m event.

There was a first sign of what lay ahead when he lipped-out at nine, and while he watched his father, Gerry birdie nine, 10 and 11, McIlroy’s only other birdie of the round was a super chip shot at the par-5 12th hole again to just tap-in distance.

McIlroy left a long birdie putt just beside the cup on 14, was in a greenside bunker off the spectacular all-water carry par-3 15th and he observed walking back to the spot where he missed a 6-foot birdie on 16 disbelieving the break in the putt.

Indeed, McIlroy one-putted his opening five holes and then added a further 23 putts in a still very respectable tally of 28 putts.

“After such a great start, I was thinking of just trying to keep it going,” he said. “I still had three of the four par-5s to play so it was all about going as low as possible.

“The conditions up until the last two holes were just so benign and the golf course was playing so easy, so not to birdie nine and to miss my birdie on 16 was a little disappointing.

“I felt I could have easily been eight-under par through nine holes but we’re right up there in the team event which is great for my dad.”

McIlroy now plays the final two rounds of the championship on the Old Course of St. Andrews where he knows how to go low having shot 63 on day one of the 2010 Open only to be blown off the course a day later in shooting an 80.

“I do know how to go low on the Old Course and if I can shoot a couple 64s over the weekend and get to 20-under par, it should have a chance to win so that’s the goal now headed to St. Andrews,” he said.