Golf in Ireland: A Statistical Analysis of Participation

Højgaard clings on to lead after dramatic moving day in France

A report, commissioned by the Confederation of Golf in Ireland (CGI) and undertaken by Dr. Pete Lunn and Dr. Elish Kelly of the Economic and Social Research Institute (ESRI), was launched today and provides new evidence relating to the level of participation in golf in Ireland and the factors that underpin it.

The analysis assesses patterns of participation in golf over time, as well as exploring people’s motivation and patterns of playing. The report examines both active participation in golf, i.e. physically playing the game, and social participation in the form of club membership and attendance at events.
Golf is one of the most popular sport and exercise activities in Ireland, and is highly unusual among sporting activities in appealing more to older people. The highest participation rates are for those in their 60s and 70s. Increasing numbers of older people in Ireland play golf, but the game has become less popular among younger people, the research finds.

The physical activity provided by golf is likely to be highly beneficial. International evidence suggests, that among older people, golfers are stronger, have better balance and live longer than equivalent non-golfers. Among Irish golfers, physical and mental wellbeing, alongside socialising and improving performance, are common motivations for playing. 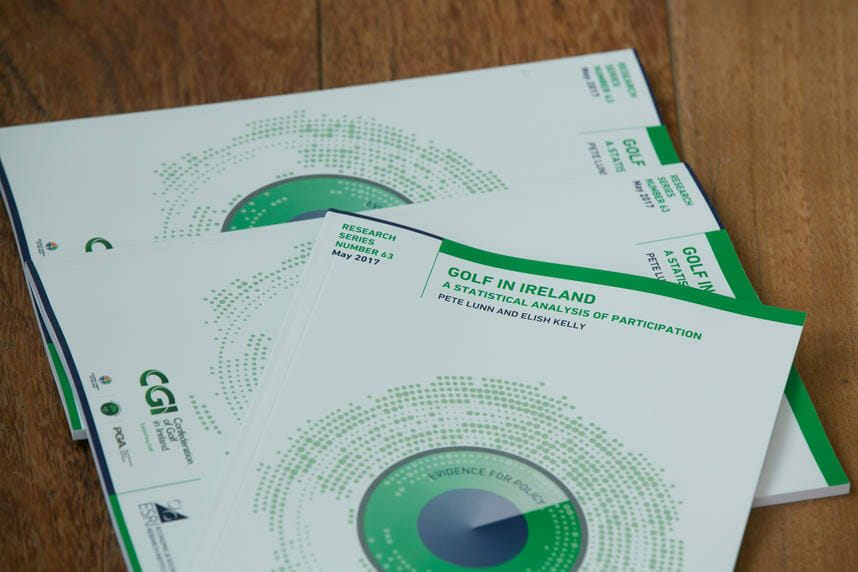 However, while participation in golf increased in the latter decades of the twentieth century, it has since begun to decline. This fall-off is caused by fewer people aged under 55 playing the game. This trend is occurring in other countries and pre-dates Ireland’s economic crisis. It is possibly linked to changing patterns of family and working life. The report notes, however, that demographic trends imply increasing numbers of middle-aged and older adults in Ireland over coming decades, which will help to maintain high participation in golf.

The study discusses the policy implications of the findings, including how golf clubs might market themselves more to families and younger adults who are aiming to fit physical activities around work and family commitments.
Dr. Pete Lunn, report author said: “Golf is unusual among sporting activities in its appeal to older people and link to lifelong health benefits.
But participation is declining and the challenge for those who promote the game is to finds ways to engage the modern generation of younger adults and their families.”

Redmond O’Donoghue, Chairman of the CGI, spoke at the launch of the report; “It is very positive that golf continues to be so popular among the older generations in Ireland, however it is also important for the future development and growth of the game that golf is an attractive and popular activity for younger generations.  We are continuing to see signs of growth and retention of younger members through initiatives such as the CGI Get into Golf programmes and Golf4Girls4Life and we must continue to ensure golf is an appealing game for all ages.”

“Golf in Ireland: A Statistical Analysis of Participation” by Dr Pete Lunn and Dr. Elish Kelly, is published as part of the ESRI Research Series. The research was commissioned by the Confederation of Golf in Ireland.

The report is part of the ESRI’s ongoing research into Health and Quality of Life, which includes multiple studies on participation in sport and exercise in Ireland.

Annesley Williams Skoda nine-hole matchplay back with a bang