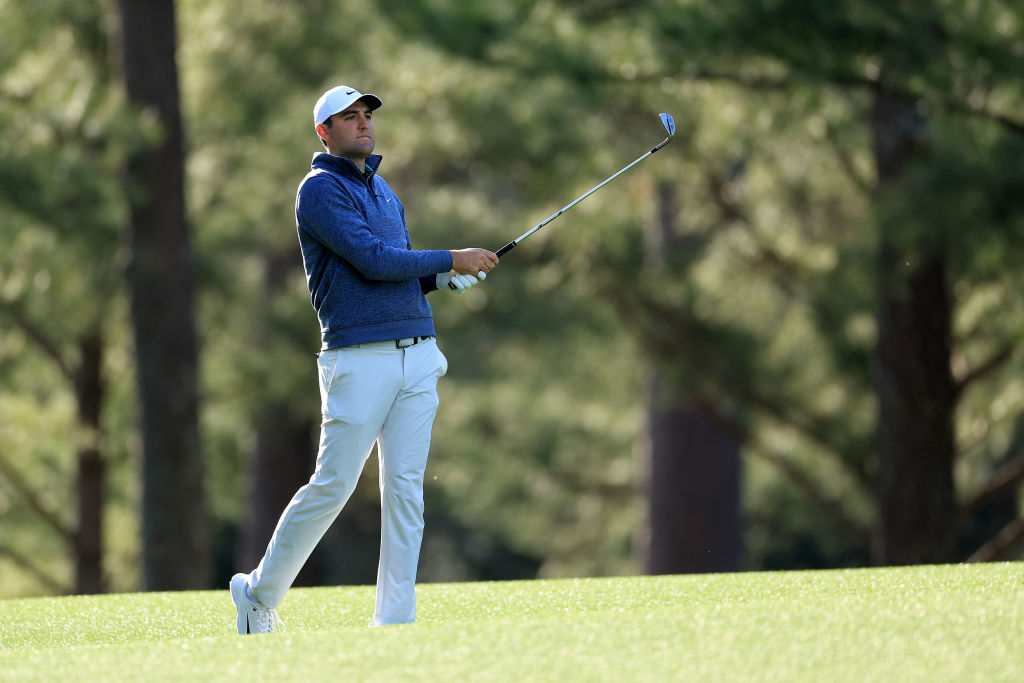 Scottie Scheffler follows his shot on the 14th hole during the third round of the Masters at Augusta National Golf Club (Photo: David Cannon/Getty Images)

Scottie Scheffler remains on top of the leaderboard heading into the final round of the Masters but his lead has been trimmed from five to three shots as he sits on nine-under-par after a one-under 71 on moving day.

Cameron Smith kept the chase alive with his second 68 of the week to move to six-under through 54 holes and we look set for a Sunday showdown between the two best players in the world on form at Augusta National.

When Scheffler opened up a five shot gap and moved to eleven-under his lead seemed unassailable but it slipped back to  three, then went back to back to five and then down to three again at days end after an eventful back nine. The world number one carded just the one par in his last seven holes and registered four bogeys on his way to the clubhouse to keep himself honest heading into Sunday.

Whisper it quietly, but this isn’t over.

Teeing off with a five-shot lead, Scheffler was in cruise control early on with two birdies in his first three holes. A dropped shot on the 4th was followed by birdies on six and eight as he climbed to -11 and his quest for a maiden major title seemed a mere procession.

However, bogeys on 12, 14 and a three-putt six on the 15th brought Cameron Smith back into play. Scheffler who has three wins already this season responded with a stunning birdie on 17 and did extremely well to scramble a bogey on the 18th after finding trouble off the tee.

“Yeah, well, obviously I didn’t hit a good tee shot,” said Scheffler of his shot on the 18th. “And after that, I didn’t hear anything loud. Teddy was like, I saw it clip a branch, we’re like, No big deal, just be over there on the left and chip out, whatever. And then we saw the guy with the flag that always finds the balls kind of panicking. I was like, oh, crap, wonder what’s going on here.

“Fortunately, they found the ball. And then all I was trying to do was figure out how I was going to get it on the green for my third shot. And fortunately, I was able to take an unplayable out of the bush and still have a swing.”

Scheffler is out again in the final group on the final day, this time in the company of Cam Smith and he’s looking forward to the challenge:

“Should be a great fight. Obviously Cam is a tremendous player, and he’s got a fantastic short game, and he’s coming off a huge win at THE PLAYERS. Both of us are in good form, so I’m definitely looking forward to the challenge of playing with him tomorrow.

“Little bit of different conditions on the golf course. I’m sure they will keep the greens nice and firm, but the wind will be a little lighter. I’m not sure how much lighter it will be, but I think we are both looking forward to the test and the challenge.

“Playing in the final group is always so much fun, so I’m looking forward to it,” said Scheffler.

After opening with a double bogey and adding three bogeys and a birdie to the mix on the front nine, Sungjae Im produced a stunning back nine of 32 to sign for a remarkable 71 and a four-under total and the 2020 runner-up can’t be ruled out even if he needs a low score and a prayer.

Shane Lowry joins Im in the penultimate group once again but he is a distant seven shots adrift on two-under after he lost all of his momentum on the back nine. A visibly agitated Lowry came home in 38 to sign for a 73.

The Clara native played some fabulous golf and was imperious off the tee but three sloppy bogeys from the fairway on 9, 13 and 17 have all but ended his hopes of a first Green Jacket.

The 2019 Open champion who hasn’t won since, was Scheffler’s nearest challenger when birdies on two and six moved him to five-under and he will be hoping for something special on Sunday.

Rory McIlroy will tee off alongside Collin Morikawa in a share of 9th place on one-over after he shot a one-under 71. At ten shots adrift a top-5 is all that the Holywood native can hope for as his wait to complete the career grand-slam will go on for another year at least.

Needing a super Saturday surge, any hope of that came to an end on the first hole when McIlroy failed to get his second shot out of the fairway bunker. An opening bogey was not on the agenda.

A second bogey of the day on six was cancelled out by birdies on four and seven as he turned in level-par. After dropping his third shot of the day on the par-3 12th, McIlroy put on another fast finish with birdies at both of the par-5s to squeeze into the top-10.

Seamus Power if anything has been a model of consistency this week as he shot his third straight round of 74 to lie on six-over and a share of 36th place.

The journey the Tooraneena native has been on is nothing short of remarkable and it will be a symbol of how far he has come when he tees it up in the final round of the Masters.

Power will go into Sunday one shot clear of the great Tiger Woods, who in truth, has absolutely nothing left in the tank.

A visibly jaded Tiger limped to a six-over 78 to lie on seven-over. 78 is perhaps a little harsh on the fifteen-time major champion but four three-putts and a four-putt ultimately told the story and images of Tiger hobbling down the 6th and out of the interview cabin were quite sad to behold.

Seeing Tiger at Augusta has been amazing, the fact he is even here is remarkable but watching him in round three showed he has a long way to go before he is fully healthy. A mammoth effort was put in just to peg it up this week and 36 holes are undoubtedly his limit currently.

Still, to see the famous Sunday red at Augusta will warm the hearts of the patrons and arguably the largest roar of the week will echo around the tall pines should he birdie the 72nd hole.

There hasn’t been much wrong with Tiger’s game this week but he is simply exhausted. Yet you can bet he will try his hardest to shoot an under-par round on Sunday.