Crafted with the purist in mind, each putter speaks to the golfing zealot that lives within us all. From the soft flowing curvatures of Soto and Chaska to the sharp geometric lines of Bandon, the collection offers a variety of fully milled putters to fit the vast spectrum of golfers and putting strokes.

The new Hydro Blast finish provides a rich premium and cohesive look to the family. This durable yet beautiful surface is achieved by applying a high-pressure stream of water to 303 stainless steel. As an unquestioned industry standard for premium putters, 303 stainless steel was destined for milling. The soft yet strong metal delivers a superior feel and artisan aesthetics.

Each model is equipped with the same White Pure Roll™ Insert that’s helped propel Spider X to more than a dozen Tour victories since 2019. It features grooves at a downward 45° angle, designed to optimise roll characteristics by producing enhanced topspin to help the ball start rolling end over end sooner.

Putters in the TP Hydro Blast collection are named in honor of iconic golfing regions and destinations around the globe. Further differentiating factors include hosel types, sightlines and toe hang. With such variety, there is a TP Hydro Blast putter for every putting style and stroke.

“We relied on precision milling and the new Hydro Blast finish to deliver an artisan look to this family of premium putters. Through clean aesthetics, time-honored shaping and superior feel, we’ve blended the modern with the traditional to create a new class of classic.” Bill Price, TaylorMade Product Creation, Putter & Wedge

Soto is a classically shaped blade that features flowing, rounded edges. A clean build with a single sightline on the back cavity, this time-honored shape is meant to inspire confidence and produce exceptional feel putt after putt. Equipped with an L-Neck hosel, the traditional blade shape produces 40° of toe hang, resulting in a putter that best fits players who create maximum face rotation throughout the putting motion. 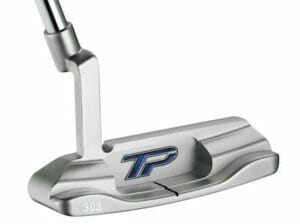 With a shorter blade length and a wider area from front to back, the Del Monte has a squattier profile that translates to a more mallet-like feel while maintaining the characteristics of a blade.

It comes in two models, one with an L-Neck and the other a Single Bend hosel. With 29° of toe hang, the L-Neck best fits players who create moderate face rotation throughout the swing. The Single Bend hosel delivers a more face balanced outcome (only 8° of toe hang) that better aligns with golfers who have a straight back and straight through putting motion.

This Tour-inspired double wing design helps frame the ball at address and encourages forgiveness via optimised perimeter weighting. With sharp geometric lines that reflect the technical precision of this classically made mallet, the Bandon was the first TP Hydro Blast model to appear on Tour. 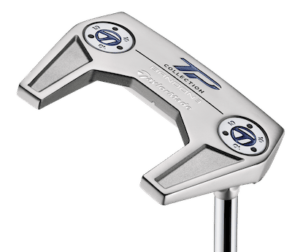 Head, South Carolina, after spending hours with TaylorMade’s Tour team and testing numerous configurations. He ultimately elected to use Bandon 1 because it improved the centeredness of his strikes – with his prior putter, he tended to have heel-ward mis-hits.

Fleetwood has a long history of using blade putters, and because this model features 22° of toe hang, it made the transition to a mallet-style head seamless.

“For Tommy, the centeredness of strike was a big reason for his switch to the Bandon. The heel-side miss is something he battled with his blade, and we’ve helped him develop a little more consistency with this one. Beyond that, he’s very comfortable with the shape of the putter and has said that it helps him with alignment.” Adrian Rietveld, TaylorMade Senior Tour Rep. The Bandon 3 is the second iteration of this model. It features a short slant hosel with increased toe hang (32°) for even more blade-like performance within a mallet design. 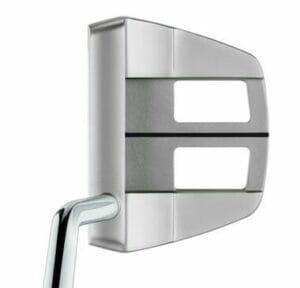 As a modern take on the traditional mallet design, the DuPage relies on unique visual alignment cues and a dual-slot cavity to help frame the ball at address. This face balanced putter features a single bend hosel and is better suited for players with a straight back and straight through putting motion.

The Tour-proven Chaska revisits the original TaylorMade Corza Ghost design with the familiar circular alignment aid in the back of the putter and three sightlines on top. With rounded 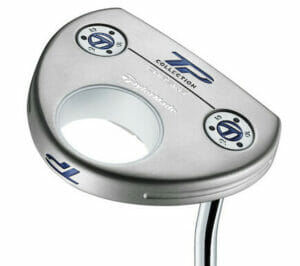 contours, adjustable sole weights and three forward sightlines, the design provides exceptional stability and simple alignment features. This face balanced putter features a single bend hosel and is better suited for players with a straight back and straight through putting motion.