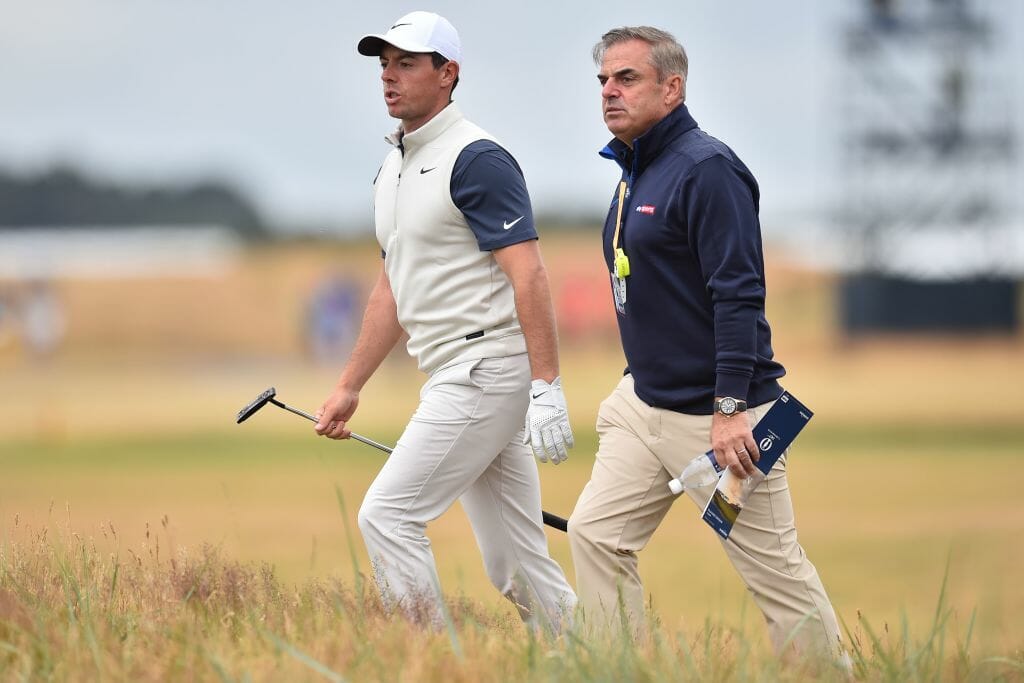 Rory McIlroy failed to secure a winning Mexican take-out but he’s been warmly praised by Dubai Duty Free Irish Open host, Paul McGinley for his actions early in the final round of the WGC – Mexico Championship in Mexico City.

Dustin Johnson shut the victory door on McIlroy by posting a final round 66 to win by five shots on 21-under par, becoming the first to win twice this season.

McIlroy, who saw his chance for a first win in 50-weeks die at the sixth hole, eventually signed for an admirable four-under par 67 to finish solo second at 16-under par.

‘DJ’ not only captured a sixth WGC title and his second Mexican crown in three years, but he joins a group of now 30, headed by Sam Snead, to capture 20 or more PGA Tour titles.

McIlroy headed into the final round of the year’s first big showdown trailing four shots behind Johnson and the four-time Major winner quickly moved to within two shots of Johnson when the American bogeyed the third, just moments after McIlroy had birdied the second.

Johnson was then involved in a bizarre incident right of the fifth where his ball came to rest directly behind a tree.  After much deliberation, and given his right foot would be resting on a cart path, Johnson was given ‘free’ relief and a now a clear sight of the green in saving par.

McIlroy, who had also been right, missed the green with his second ahead of taking a bogey ‘5’ to fall five adrift of Johnson.
Unbelievably, McIlroy’s tee shot at the next, the par-5 sixth, also came to rest slap bang behind a tree, with McIlroy seemingly also confident of availing of a ‘free’ drop.

The European Tour’s Mike Stewart, who had just officiated on Johnson’s ruling, quickly arrived at the scene but it was not good news for McIlroy.

“What other way can I play the shot – my club is going to hit the tree,” argued McIlroy.

Stewart was steadfast in sizing-up shot options available to McIlroy. “To me that is a reasonable stroke from where you are,” said Stewart, pointing with his walkie-talkie.

The conversation continued for another minute with Stewart then offering McIlroy the option of a second opinion, with McIlroy, after a few seconds of quietly taking-in the comment, declaring: “No, it’s fine. I’ll play it where it is.”

McIlroy played the shot left-handed using the back of a wedge, chipping back to the fairway before doubling down on his first error by putting his third into water. After a penalty drop, he walked off with a bogey ‘6’ to Johnson’s birdie ‘4’.

Now six behind, it proved to be the highwater mark of McIlroy’s challenge.

Yet McGinley, no doubt personally disappointed to have learned earlier in the week that McIlroy would not be teeing-up at Lahinch, was full of praise for McIlroy in commentary.

“I was one who was very critical of the ruling that affected Haotong Li out in Dubai but on this one, Mike Stewart was strong and correct,” said McGinley on SKY. “It is unlucky for McIlroy as golf does swing about but the rules are the rules, and this is what makes the game so strong.

“Though in saying that, all credit to Rory in the way he conducted himself.”

In contrast, fellow SKY commentator and past PGA winner, Rich Beem wasn’t so sure. “I would have exercised my option for a second opinion,” said Beem.  “There is nothing wrong with Mike Stewart as he’s an excellent referee but I would have sought a second opinion.”

McIlroy regrouped over the inward nine thanks to six birdies but Johnson fought fire with fire to win out by five in a dominant performance and commented; “This is a big one for me and it gives me a lot of confidence for the rest of the year. I feel like the game’s in good form right now.”

“It’s been a little bit since I’ve been in the lead with this kind of field and this calibre of players. I know Rory’s playing really well, he was not too far behind me, so I definitely felt some nerves there at the beginning of the day.”

“I made some really good par saves early in the round on the front nine and that kind of gave me the momentum. I knew I was still swinging it well, I just had to give myself some chances and turned it on on the back nine. Me and Rory both played a really good back nine,” added Johnson.

While McIlroy was all about the positives; “It was good. Some weeks you play well and someone just plays better and that’s what DJ did this week. When DJ has a four shot lead and goes out and shoots five under par, he’s not going to lose.”

“My game is right there, I’m really happy with everything. I’ve just got to stay patient, look at the positives and just keep persisting, putting myself in positions and sooner or later it’ll go my way.”

Meanwhile, Shane Lowry was headed home after an uneventful week where he failed to break 70 in any round en route to a closing 75 and a nine-over par total.

It will be the double Honda winning Harrington’s first event since breaking a bone in his wrist late last year.