Harrington & Dunne bumped back to economy at TA Open

Padraig Harrington and Paul Dunne disappointingly combined to find themselves bumped back to economy class on day two of the Turkish Airlines Open in Belek.

The Irish duo were out in the last group on day two alongside red-hot Justin Rose but slipped five shots off the leading pace with Harrington posting a 70 and Dunne a 71 for a share of seventh place at seven-under on the Regnum Carya course.

Rose opened-up a two shot cushion with a second straight 65 to move to 12-under par as he looks to not only successfully defend a title for a first time in his 20-year pro career but return to World No. 1.

Harrington capped his round holing a four-metre putt for an eagle ‘3’ at the par-5 15th while, for a second day running, the Dubliner birdied the first, ninth and 12th holes.

But five bogeys, including back-to-back dropped shots at four and five and also a bogey at his last, with playing partner Rose walking off with a birdie, took the sting out of Harrington’s enthusiasm.

In fact, he bizarrely and very nonchalantly signed his name ‘ ‘Padraig Harrington was here’ on a bark tree outside the scorer’s hut after his round. 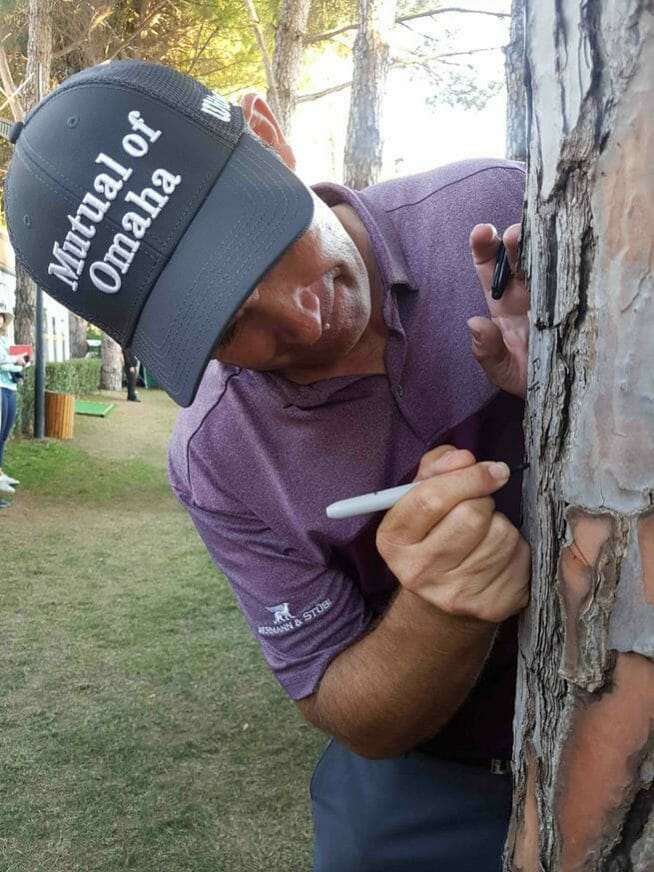 “It just wore me down out there today,” said Harrington. “I putted horribly and while the eagle on 15 was good, to three-putt both 16 and 18, and all the other missed putts I had, was disappointing.”

“If you are not holing putts your momentum is dire.”

Dunne went into day two leading by a shot following his blistering first round 64 and while he bogeyed the second, the Wicklow golfer picked-up birdied on five and eight

But after birding the 10th hole a day earlier, Dunne found the water on day two and walking off with a double-bogey ‘6’. His only real joy was eagling the par-5 12th hole and then like Harrington, Dunne also bogeyed 16 and the last.

“It was a tough day really, I kind of struggled all day, battled through,” he said. “To be honest level par was pretty good, it keeps me relatively in there. Hopefully that’s the bad day gone.”

“I just lost the face, swung the club badly. It is easier to control your short irons if you use the ground to get a feel (off) the face. I missed two tap-ins in the first four holes and that set me on the back foot, I would have been one under through four and I was chasing it.”

“The eagle on 12 was good.  I had a nice save on 13, a birdie on 14 but then to play the last four in two-over was disappointing. The good thing is there is still 36 holes left, anyone could shoot 14 under out there over the weekend.”

“Justin played great, he is always playing great. But you never know what happens, it is a funny game.” Shane Lowry though, didn’t see the funny side when he doubled the par-4 17th on route to a 70 to move to a four-under and share of 31st.