Will Rory McIlroy recall 2017 as a year lost or a life found?

This anecdote may have passed by your eyes at one time or another but when a modern day superstar is going through some “turmoil” I’m quickly reminded of it.

The main protagonist is George Best, found by a disbelieving bellboy on a hotel bed awash with casino winnings and a half-naked Miss World frolicking alongside him for good measure. Upon delivering his champagne, the young runner famously asks – where did it all go wrong George?

As we reach year’s end many are asking the same question of Rory McIlroy- 28, married to a beautiful blonde wife he seemingly adores, World Number 10, scrounging to put food on the table for Christmas with just the $2,430,182 banked on the PGA Tour this year – if you’re not lighting a candle for poor Rory at times like this then there’s clearly something wrong with you.

Indeed I’ve been thinking a lot about Rory of late, along with the homeless and helpless of course, but I’m left torn between two trains of thought – 2017, the year that got away from him OR 2017, the year McIlroy really lived.

On the golf course, by his enviable standards, it’s been a disappointing one for Rory. It was his first winless season out on Tour, hampered by injuries, indecision and timing. He was abandoned before the season began as ‘swoosh bucklers’ Nike removed themselves from the manufacturing side of the game. Rory et al were left to their own devices, trialing new equipment in search of the one.

But when all the fish in the sea are available how’s a man ever to settle?  (I joke Mam – by the courage of his convictions of course, and he’d be lucky to get one that loved him back in the first place) In poor Rory’s case though, it was hopeless. Having bashed more balls than a military drill sergeant at Bootcamp, his prolonged search for a partner in Dubai ended in a stress fracture to his rib just before Jesus’ birthday.

It was an injury that he carried into the New Year, flaring up after his playoff defeat to Graeme Storm at his first tournament of ’17 in South Africa. He stepped away from the game to let it heal but with Augusta around the corner in April and a career grand slam calling his name, he was impatient with his time as eternal greatness proved all too alluring.

An intense period of play, though not all that unsuccessful, was ultimately his undoing as the ailment resurfaced post-wedding at Ashford Castle. It was around then that the coincidental timing of the recurrence raised questions of his commitment- whether the injury existed at all or if McIlroy’s love of the game was simply waning. Spasms and niggles were cited amongst other excuses, though Rory did manage to settle on Taylormade clubs in May to put one area of uncertainty to bed.

However Rory’s inability to shy away from inevitable questioning came back to bite him – his honesty was repeatedly used against him as those whose mindsets dare not change flooded golfing forums with mistakenly misguided opinions enhanced by further speculation and drivel. The man who resurrected our National Open still not good enough in the eyes of some to bear association with our overachieving island.

Yet it was at this time I predicted an upturn in his fortunes, partly in defiance of the begrudgers, but more so because like a property market on its knees, I thought his play had hit rock bottom and now was the time to invest. I backed him mid-round one at the Open at 80-1, Rory plus four through 6 and going backwards. Inspired by my faith and JP’s four letter reminder, his identity returned to him to post some encouraging numbers, his tied-4th meaning my loyalty paid dividends too. 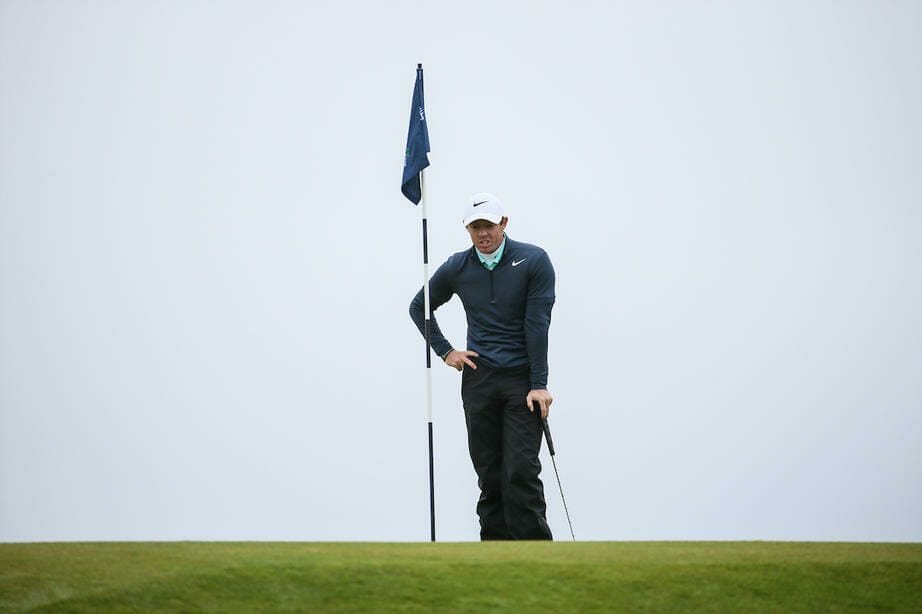 His game threatened to catch-fire thereafter with a second successive top-5, this time at the Bridgestone, but he failed to carry that form into the final Major of the year as inconsistency reigned supreme and my foresight proved futile.

It was his short game that suffered most through a period of lost confidence. By August’s end he’d used nine different putters in tournament play whilst his wedge game looked increasingly to blame for his shortcomings on the putting surface. Ranked 3rd in strokes gained off the tee, McIlroy ranked 145th in strokes picked up from between 100-125 yards out.

‘Jaysus if I could drive the ball like that fella I’d be a pro,’ your average club member bewildered at how a 24-handicapper could hit it so far but not manage the simplest tasks around the greens. There were times I looked at Rory with a similar disposition, and whatever about losing belief with putter in hand, I couldn’t help but correlate his abysmal wedge-play to a lack of practice. And that’s when the second train of thought kicked in.

I’m a year McIlroy’s junior and all the more jealous for it but I’ve reached a point in life where peers and parents alike expect my boyish charm to fade and the man inside me to take hold of life’s reins. It’s a coming of age thing- playtime is over. I’ve had my fun, traveled the world and got the passport stamps to prove it. The day has arrived to jump two feet into a career, get a mortgage, settle down and see out the rest of my days looking back on these ones wishing they never ended.

I look at Rory McIlroy and every other prodigious talent, be it in the sporting industry, music or film and I wonder when that day came for them – or if it ever did? Blinded by the spotlight before they had a chance to adjust, they’ve been brought up with a weight of expectation that must be embraced as a gift and never a burden.

Take Rory’s infamous ankle injury in 2015 that ruled him out of the Open Championship as an example. Sustained when kicking a ball around with his mates, the lifelong Manchester United fan’s actions were considered irresponsible, naïve, stupid, but never one of life’s unfortunate happenings.

He labelled last year a transitional one and in many ways it was, but if it wasn’t for the long line of dependents prying at their cash cow, maybe he’d label it something else. God forbid in a career that will hopefully span the best part of three and a bit decades that the exhausted entertainer seeks a bit of time to himself. All the money in the world and no time to spend it – is it that inconceivable, that downright blasphemous that Rory would down tools for a gap year amongst the mayhem?

Now I’m the one speculating but as a spoiled twenty-something – a product of the world’s busiest generation of ungrateful, terminally bored silver-spooned scrooges – I could fully appreciate McIlroy coming out to say that he’s had enough of the media vultures monitoring his every move and he’s instead jetting off to the Bermuda Triangle with just his Kindle and wife for company for a well-earned sabbatical.

That won’t happen of course – not while sponsors are so generously filling his coffers with gold, but I’d have no qualms were the news to break of a McIlroy hiatus. He’d be hung, drawn and quartered from all angles for taking such a rebellious stance – we’re all rotting in our jobs year after year, the least he can do in return is play to his talents until they abandon him. But it would be fine by me Rory. I’d make far better use of your money at 27 than I would at 67. It’s no wonder I’m not your manager…

In truth, I’ve lambasted Rory from near and far this year, but always from a loving place. As the likes of Johnson, Spieth and Thomas rightly got the plaudits for some gripping golf, I waited patiently for McIlroy to remind them who’s boss. The natural heir to Woods’ throne, it was only a matter of time before Rory took his seat at the top table. Only now I’ve come to accept that there’ll never be another Woods, at least not in my lifetime. And if there is, in all likelihood it won’t be my Rory.

It’s not that he lacks the ability- his talent is undeniable. But the stars of today play with a different mentality, happy to share the wealth than strive for domination. Life is filled with distractions, most of them wonderful when you’re a multi-millionaire. The blinkered ambition of a Woods with a win at all costs attitude is a thing of the past. There’ll continue to be a multitude of first time Major champions, not because the level of competition has increased but because the rewards outside the Majors are more than sufficient to enjoy a life of luxury. Simply put, you no longer have to win if you don’t want to.

That said, I still believe McIlroy will win more than his share of Majors, he’s too good not to, but he’s a 28 year old global superstar with interests outside golf. It might be a difficult thing for the purists to accept but it’s a sign of the times. And as Bob Dylan says, the times they are a changin’.