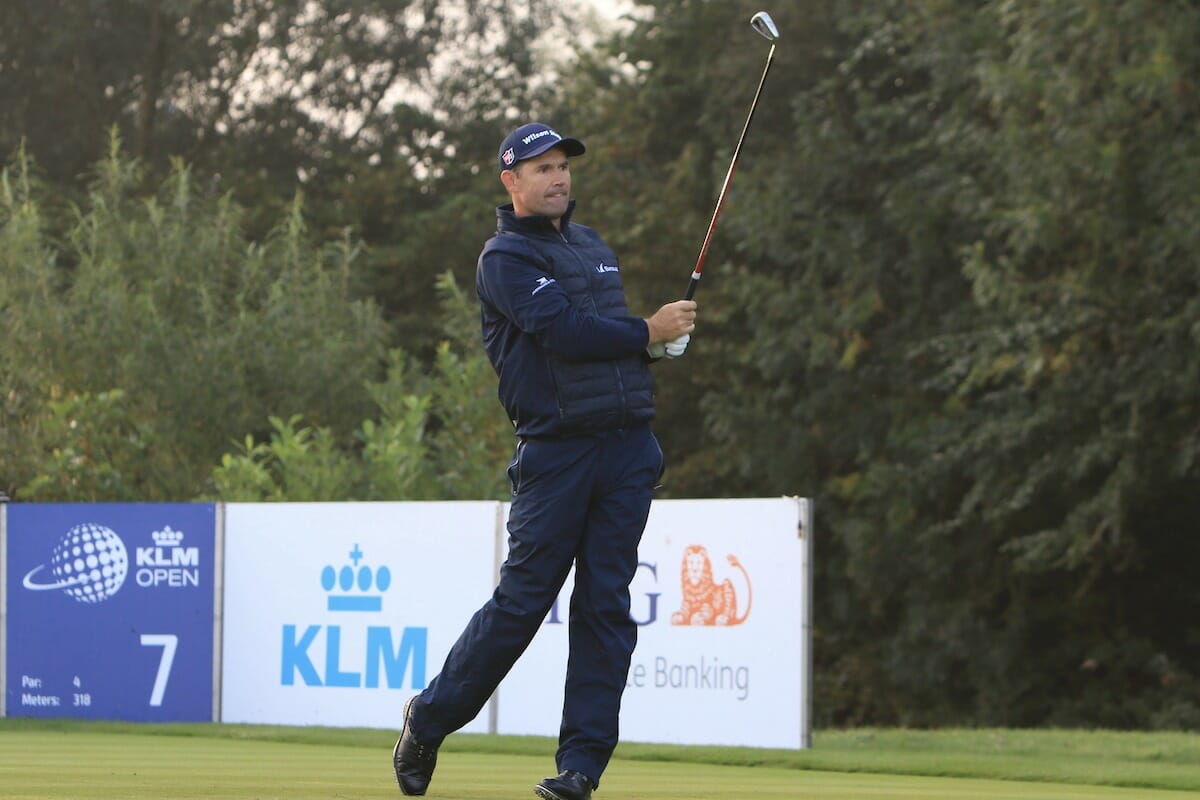 Padraig Harrington and Paul Dunne made positive inroads during their second rounds to climb to level par at the rain disrupted KLM Open. The pair currently lie in a tie for 54th place, one shot inside the cut mark.

Starting from the back nine, Dunne was out in 34, mixing three birdies and one bogey as he made amends for a disappointing opening 74. Back-to-back bogeys to start his back nine looked to derail his challenge, but Dunne dug deep to fire three birdies in succession from the 14th to post a fine 68 taking him safely into the weekend.

Harrington too, started his second round on the back nine after a steady opening 72 left him on one over par. Out in two under 34, he climbed back into the red briefly before two bogeys either side of a birdie four on his 15th brought him round in 70 to sit on even for the tournament. Both will now be hoping to play themselves into contention over the weekend with fast starts in Saturday’s third round.

Joel Stalter is currently the man they’ll have to catch. The Frenchman followed an opening 65 with a four under 67 to lie on ten under, one ahead of Thailand’s, Kiradech Aphibarnrat, with Germany’s Sebastien Heisele a shot further back. Stalter is no stranger to leading tournaments, and will be hoping to draw on experience knowing what to expect this time around:
“I had a really tough start today because the conditions were still pretty bad but after a couple of early bogeys I played really well. I could have probably had a couple of more birdies at the end of the round but I am very proud of the way I have played because the last two days have been really long.

“It’s great to be at the top of the leaderboard heading into the weekend but I have been in this position before – all that matters is being at the top of the leaderboard on Sunday night. I was in the same position in Munich going into the weekend so I know what to expect – there will be a lot of people and big crowds but you want to be playing in those circumstances.
“You really need to control the ball with your iron play around this golf course. I managed to do that over the first two rounds and make a few putts so I just need to try and keep doing that over the weekend.”

Above images by Thos Caffrey Golffile.ie

One man who sounded particular confident after his round was Aphibarnrat, clearly delighted that the work put in with Pete Cowan is starting to pay off:
“I hit the ball really well today and hit a lot of great shots so it’s all been very positive. I only made one mistake today when I drove the ball into the water on the 11th but I made a great up and down there for bogey and then after that I played great.
“Everything about my game is so sharp right now, especially my iron play. I’m still hitting a few putts which I am not happy with, but the rest of the game is in great shape.

“I’m starting to really feel the benefit of working with Mike Walker and Pete Cowan. I have been working with them since the start of the year and have made so many good changes. The nearly killed me with all the work I have had to do but now it is starting to feel really good. I need to now start aiming high and winning tournaments more often.”
The story of the day however was Lee Westwood who carded a seemingly effortless 65 to roll back the years and move within striking distance of the lead.
The Englishman looked close to his best as he produced a vintage display of the imperious ball-striking which once made him the world’s best player to move to seven under par and three strokes behind clubhouse leader Stalter.
The quality of Westwood’s performance was confirmed by his playing partner Ross Fisher, who called Westwood’s second round “one of the easiest 65s I have seen in a long, long time.”

Westwood concurred with that view and is certainly looking forward to trying to close out a 24th European Tour career victory in this, his 501st appearance on the circuit.
“The first round was just kind of steady. I didn’t really hit it close enough so I didn’t have that many real chances for birdie and then the second round was a lot better. I did hit it close, made a few good putts and I also burned the hole a lot. That 65 for the second round could easily have been 61.
“I am hitting the ball well. I have got my distance control back and the strike is getting better and better. I’m driving the ball in the fairway too which you obviously need to do and I feel like I am rolling the ball well on the greens so hopefully we can see a few more putts drop over the weekend.

“If I can play like I did in the second round today then I’ll have a chance over the weekend so the plan will be to try and replicate what I did out there today. Ross (Fisher) just said to me in the scorer’s hut that my round was one of the easiest 65s he has seen in a long time which is a nice compliment and one that I’ll try and take into the weekend.
The second round of the weather-affected KLM Open will be completed on Saturday morning, with half the field to complete their second round scores.