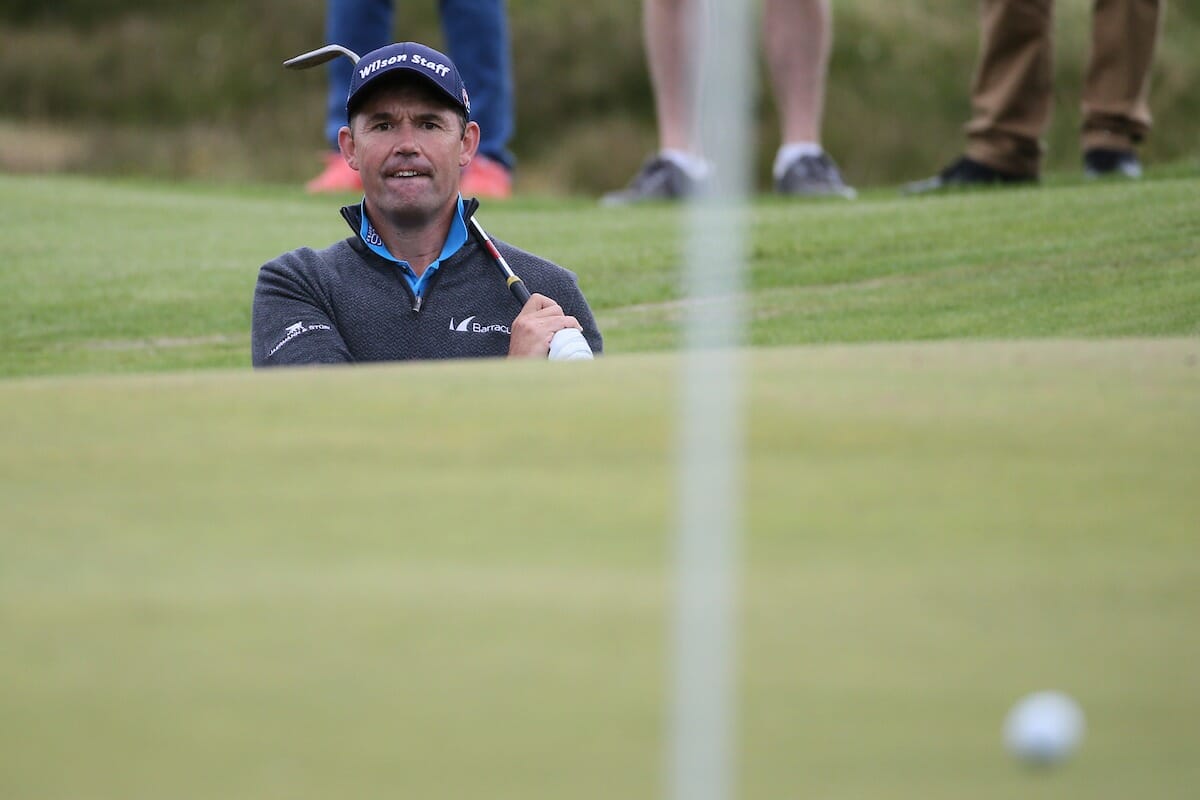 Padraig Harrington insists it will now be a sheer weight of numbers in having won 30 times around the globe if he is to win for a fourth time in Scotland.

Harrington, and now after having first missed his Monday night flight to Glasgow, finds himself heading to the weekend sharing the lead on nine-under in the Aberdeen Asset Management Scottish Open.
Those also at the top include England ’s Callum Shinkwin (68) and little-known German Alexander Knappe (65).
There was none of the “stress” of day one in Harrington’s second round of 68 as was the scenario on day one with a “boring” round of four birdies, including back to back birdies on 10 and 11.

“Today was just boring. There was no stress. All day, I made two birdies on par 5s and I hit two 7-irons on my 10th and 11th hole, the first and second hole, in pretty close.
“So, that was my day and it couldn’t have been more opposite than yesterday”.
However, it had been a stop start commencement to the event for Harrington who had hosted a pro-am on Monday following the Irish Open but then later in the day missing his flight to Glasgow.
“This whole week has been interesting as I played a Pro-Am on Monday in Ireland for team Ireland for sort of the up-and-coming pros, and I was meant to fly out, coming in here, I was due on Monday night and as it turned out the traffic was really bad and I ended up missing my flight”, he said.
“So, I got an extra day at home, which meant I didn’t get a practise round but I came in probably quite refreshed.
“I had come home from the Pro-Am and a number of people who were at the ProAm rang me to tell me that there have been a crash on the motorway, and it was an easy decision just to go, you know what — and it really was a good decision.”

The triple Major winning Harrington’s effort over two days on the Scottish west coast is his lowest opening 36-hole tally since last October when he was 13-under par on route to a 15th Tour win at the Portugal Masters.
And having won The Open and two Alfred Dunhill Links Championship Links titles in the Home of Golf, Harrington reckons he needs to do no different than what he has done since winning a first Tour title in Spain in 1996 if he is to capture a 16th on Sunday.
“Well, I don’t need to do — I won’t be doing anything different,” he said.

“But I don’t expect it to be — I don’t know what’s going to happen the next few days. I suppose the difference is, I always knew you can’t have it on demand.
“I now accept that you can’t have it on-demand and that might be the difference.
“I’ll go out there and play tomorrow, I’m working purely a numbers game. If I get myself into contention often enough, I will win enough tournaments, and that’s the way it is.
“And if I play enough tournaments, I will be in contention.
“It’s just numbers; numbers, numbers, numbers, but I can’t do it on-demand, no!”