A lot of positives for Paul Dunne despite playoff defeat

Losing a playoff in the quest for your first European Tour victory was a tough pill to swallow for Paul Dunne but when the Greystones professional wakes up tomorrow there are plenty of positives to take from his weeks work in Morocco.

A career-best payday of €277,770 propelled Dunne into the top-20 in the Race to Dubai standings and also helped the 24 year old become the first new Irish player in eight years to move into the top-200 in the official world rankings.
In 2016 Dunne won €260,793 and finished 106th in the Race To Dubai but the steady progression is evident in his play so far in 2017. Of the 10 tournaments Dunne has played so far this season he has been in the money in eight and has two top-10s and has amassed €403,975 in these events which has secured his playing rights for 2018.

“I’m happy with my form and looking forward to next week and hopefully I can do a better job of finishing it off.” Dunne said.
“I felt like there were just so many shots that slipped away from me today. It’s just one of those days. I’m a bit disappointed not to come out with the result we wanted but it’s a step in the right direction.”
Dunne now heads to China for the Shenzhen International and Volvo China Open.

In the playoff Dunne had to play second fiddle to a rejuvenated Edoardo Molinari as the 36-year-old former Ryder Cup star who has battled through career-threatening injuries returned to the winner’s podium after over six years.
“To be able to win deletes a lot of bad memories and hopefully I can keep going down this road,” said Molinari.
It was Molinari’s heroics at the final hole which proved the real turning point, sinking a 25 foot putt for what was the only three on the tough par five 18th all day to force extra holes courtesy of a five under 68 and a nine under total.
Both players struggled on the first extra hole but, following an imaginative putt from the first cut of rough off the back of the 18th green, Molinari left himself with an easier par chance than Dunne. 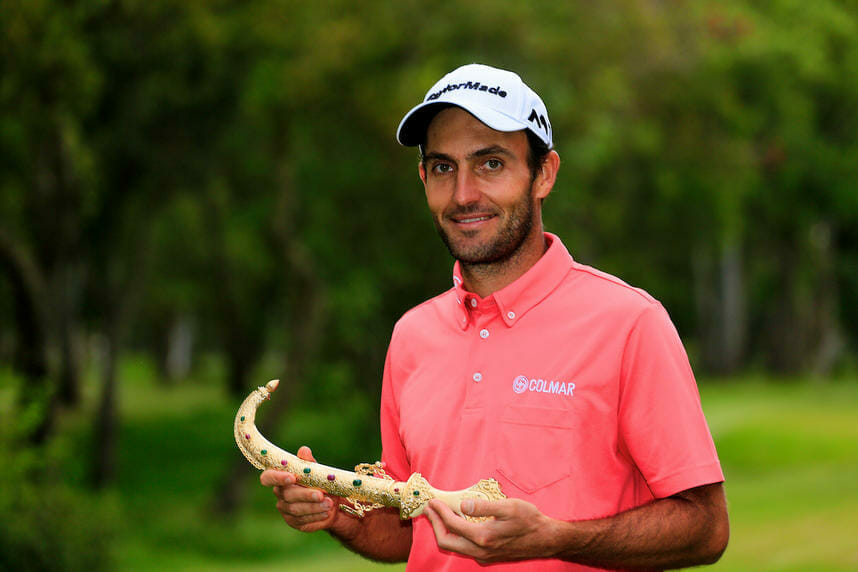 “Given the circumstances it’s probably one of the best back nines I’ve ever had. After the 12th hole I thought I had a chance, then I missed a short putt at the 13th. I had another chance on 15 – didn’t make it – then when you bogey 16, you think it’s almost over because on the 17th today you’d be happy with a par.” Said Molinari.

“I managed to hit a great five iron to seven or eight feet and I made the putt. That gave me a boost going down the last – I still had a chance. I thought ‘if I can make a three here then suddenly it’s wide open’.
“It just shows that you should never give up, you should always keep trying, keep working hard. I’ve probably been the player who has spent the most time on the driving range over the last three years. This is a great reward for so much hard work.
“It’s been a long time. Sometimes you doubt yourself and think these times are never going to come back.”

Even at the expense of Dunne winning, it’s great to see a player like Molinari back in the winner’s circle. On this form a win for Dunne is not too far away.