A near Perfect Storm for Graeme in South Africa

Graeme Storm beat Rory McIlroy in a play-off to win the BMW SA Open hosted by City of Ekurhuleni just 84 days after he thought he had lost his European Tour card.
The Englishman missed a par putt on the 18th green at the Portugal Masters in October to lose his playing privileges by just 100 euros but was handed a reprieve when Patrick Reed did not fulfil his quota of required events to retain his tour membership.

Storm made the very most of his second chance at Glendower Golf Club, overcoming World Number Two McIlroy on the third extra hole after an enthralling closing round.
Storm hit his approach to the heart of the 18th and made his par three times in the play-off, with McIlroy missing the green at the third attempt and leaving himself an eight-foot putt for par that missed on the low side.

The 38 year old had entered the final day with a three-shot lead and got to 18 under with a closing 71 but McIlroy reeled him in with a 68 to set up the dramatic finale.
The win is Storm’s second on the European Tour and first since the Open de France ALSTOM, nine years and 198 days, and 274 events ago.

“I am speechless. It’s been incredible and I can’t quite believe it. “I was saying to Rory in the walk up the fairway in the last play-of hole that this was actually the first time we had played together and to play 21 holes with him was just incredible. What a superb guy he is. An absolute gentleman and I think the best player in the world right now. And I have to say a few words on Jordan Smith. What a player he is going to be. He was brilliant today.”
“This is a dream come true, especially after what happened to me last year with my card and everything”
“I really took a lot from that experience and told myself to try and grasp the opportunity if getting my livelihood back with both hands and I have done that this week. It’s an unbelievable feeling. I hung in there today and didn’t play my best stuff but I knew if I could hang in there that I might get my change and thankfully it came.

“It really means everything to me to be in the winner’s circle again. I have been to hell and back to be honest with you. It’s been an absolute roller coaster over the last year and a half – especially the end of last year. There was pressure today but not the same pressure as trying to keep your European Tour card. That’s real pressure and something I don’t want to feel for a long time.”

McIlroy was playing the event for the first time since 2009 after being drawn to the City of Ekurhuleni by tournament host and great friend Ernie Els, and the huge crowds that flocked to see him and the rest of the field on Sunday were treated to a wonderful spectacle. 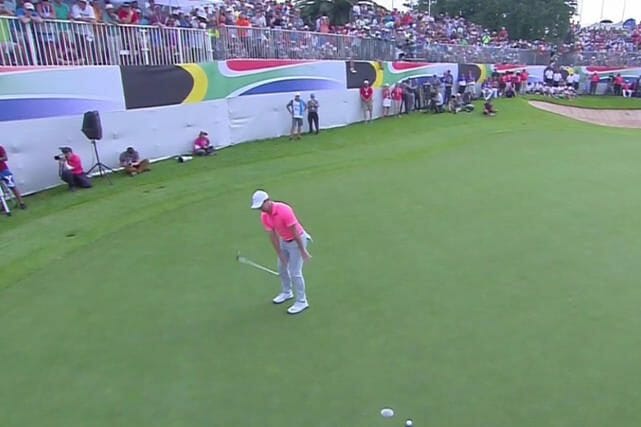 “Obviously it’s disappointing to finish like that but Graeme has played well all week and what a story it for him. He thought he had lost his card at the end of last year and there he is now standing with a trophy in his hands after the first event of 2017. I’m delighted for him. I wish I could have done a little more but it’s not a bad way to start the season and gives me something to build on in the weeks ahead. I knew that if I had a good week here then I can go to Abu Dhabi next week and win there and get back to Number One so that’s a nice goal to have going into next week.
“I played well and wish I could have got a win but it’s a good start to the year. But look, we have had an absolutely fantastic time here in South Africa over the last ten days and we are already planning to come back near the end of the year.”
McIlroy did pick up a slight back injury on Friday but managed to play on and take Storm all the way to sudden-death. The Northern Irishman is hopeful of being able to play in next week’s Abu Dhabi HSBC Championship next week but will undergo a precautionary MRI scan on Monday.

“The back is kind of ok. I am going for a scan tomorrow. I fly to Dubai tonight and then will go for an MRI tomorrow just to see what’s up with this joint in my back. It was manageable this week with tape and a few pills so I am fine but first and foremost I have to get fully fit and healthy again and hopefully I’ll be alright to play next week. We will see what happens. But like I said, it is manageable with the tape and a few anti-inflammatories but it’s not 100 per cent.
Part of me really wants to make next week because there is so much to play for but at the same time there is so much to play for over the whole season and I don’t want to jeopardise long term goals for short term gain but hopefully I’ll be good to go.”