No Regrets a year on for Damien McGrane

Damien McGrane might be a man of many things but regret never enters the equation. A unique breed of golfer in his own right, he never harboured dreams of stardom. Where others grew up fantasising about flash cars and lofty bank balances, McGrane’s priority list was topped by becoming a PGA professional at Headfort. So it should come as no surprise that a year since he last teed it up at the Portuguese Masters on the European Tour, McGrane looks upon that part of his life with fondness, but with no ambition to return.

“No. It was nice to play once I felt I was competitive but once I got into my mid 40s and realised I was less and less competitive, it was great to have the opportunity to say, listen, I’ve done my best and walk away. I have absolutely no regrets. I don’t do regrets.” As unequivocal as he was in his answer, I would’ve enjoyed the opportunity to ask the same question after Padraig Harrington, 45, stormed to victory in Portugal a week later, not that McGrane would’ve been watching. “I’m not a great golf fan. I don’t watch golf on TV. The game has moved on. Every year it takes a stride forward. It’s certainly gone forward since I was last there. I wouldn’t like to be trying to get myself together and going out on that tour because, needless to say, after being off it for a year you’d be left way behind.” McGrane admits that the opportunity to return was there, having been afforded numerous Tour invites in 2016, but admirably he felt that not only was he wasting his own time, he’d also be taking up a valuable spot for a player of the future to develop.

Would he rule out Qualifying School? It was only last year that the Meath man competed despite having seemingly retired a short few weeks earlier. The idea at the time was to keep his options open, a ‘no stone left unturned’ approach that McGrane has lived by. This year, however, the book is firmly shut.  “I’ve no interest in Q-School this time ‘round. After playing social golf for much of this year on the Irish region, it’s certainly not preparation for going back out on the main tour.” 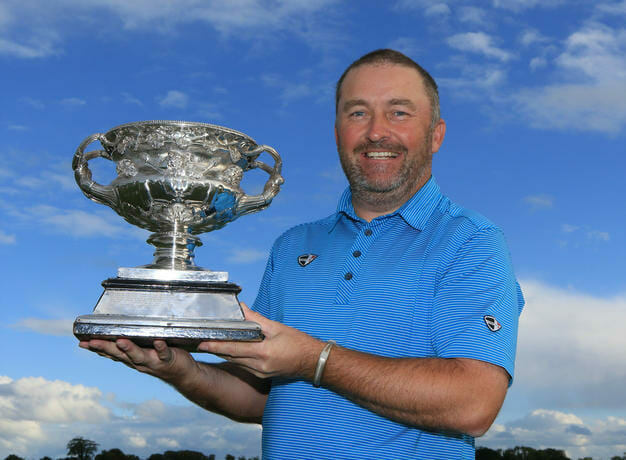 It was a fitting victory for McGrane who has always been a proud PGA member and regional supporter. He grew up at Headfort Golf Club aspiring to be as good a player as club professional Joey Purcell. He served his apprenticeship at Portmarnock and went on to become club professional at Wexford Golf Club for eight years from 1997.  The European Tour was never on the radar but a consistent progression in his game eventually changed the bigger picture. “My golf developed. At each stage I settled into I managed to get some achievement out of it. Ultimately I started out as a club pro and my golf dragged me onto the European tour. I didn’t set out to play on the tour but ended up on it.”

McGrane’s route has become the road less travelled as modern pros look to bypass the regional scene in a bid for instant success, a course of action he wouldn’t be encouraging. “It’s an extremely hazardous way of doing it. These players really need to hit the ground running, need to be successful fast and I think we all realise that things generally don’t happen that way. I think the PGA route gives you a great education, whether it be how to play better golf, improve your own golf swing or just the general dos and don’ts that these guys could miss out on.”

As an alternative, the regional circuit in Ireland remains as competitive as ever with full-time players regularly coming back to compete alongside club professionals, but it has resulted in these touring professionals holding quite the monopoly over the prizes. Is it fair that professionals trying to juggle working behind the counter with limited practice time have to compete against those fortunate enough to be able to dedicate 100% of their time to the game?

“We’re all golf professionals and the best player wins, and if the best player wins it helps sponsorship, it helps the future. That’s the way it should be. If there’s great players on the Irish scene then the scene will attract more money. It’s all about the tour players coming home and supporting the Irish players. And if they win all the money then that’s a good thing as it’s good publicity for the Irish pros to be mixing with players who generally play at a higher level.”

Of those playing at a higher level, McGrane struggles to hide his feelings on what has been an underwhelming year. “This year there’s been very little success from our own guys so it’s been disappointing.  Clearly they’ve a long way to go, some of them have obviously been working on the wrong things and wasting their time. Tour School comes along then, guys have had a bad year and mentally then they go into it in a bad situation. Something has to change.” Exactly what? Damien said he’d rather share those ideas with the individuals in question in a face to face environment.
But one thing he has initiated is the Irish Tour Pro Series Shootouts which will resume after a very successful initiation last year. The idea is to take the best 12 available Irish professionals from across the European Tour, Challenge Tour and Mini Tours and have them put up 100 euro each into a ‘winner takes all’ pot over 18 holes. Much more important than the money involved is the advice and access to learning available through everyone meeting up and sharing experiences and McGrane is grateful for the support it has received.

“The golfing fraternity in Ireland are more than happy to see and support something positive and something new. Hopefully we can help these guys who’ve been dropped by the Golfing Union of Ireland, to make life a little bit easier for them. They’re facing a huge challenge and generally there’s nobody out there who can give them advice.”

“We’ll run it again this winter. I’ll let the guys get home from the Tour School. There shouldn’t be any distractions now as focus should be on the Tour School. But hopefully there’ll be some good news stories between now and then. It’s no good doing all this if we don’t have anyone on the bloody tour. It’s a poor reflection on us who are involved in the industry if none of our young players are making any progress. We are hoping things are going to improve and these guys get a chance to get out there and give us something to watch on TV.”
“In five years’ time, hopefully the Senior Tour is a lot stronger than it currently is. If I can keep my game in reasonable condition, and myself in a similar condition, I’d play a little bit yeah”
One man who may not have graced our television screens for the last time is McGrane himself, though not one to get too excited, he admits a lot can happen in the five years before he’s eligible for a Senior Tour debut.

“Five years’ time, hopefully the Senior Tour is a lot stronger than it currently is. If I can keep my game in reasonable condition, and myself in a similar condition, I’d play a little bit yeah. You never know, you could go out there and love it or you could be bored with the idea.  As tour players we’ve generally been spoiled playing for reasonably good money and then when we step back, as far back as say the Senior Tour, the money is a lot less. So is it as easy to be competitive playing for small money? When the time comes we’ll have to see how it suits. Some people just wouldn’t get inspired playing for the smaller money and if I fell into that boat I’d struggle to motivate myself enough to get out there and compete.”

Something tells me that the allure of a swansong competing alongside some of the greats of the game will be too much to refuse, not that he’d ever admit it to me, but in the interim here’s hoping that McGrane can pass on his wealth of experience to some of our brightest talents who need it now more than ever.

This feature appeared in Issue 2016-8 of Irish Golfer Magazine