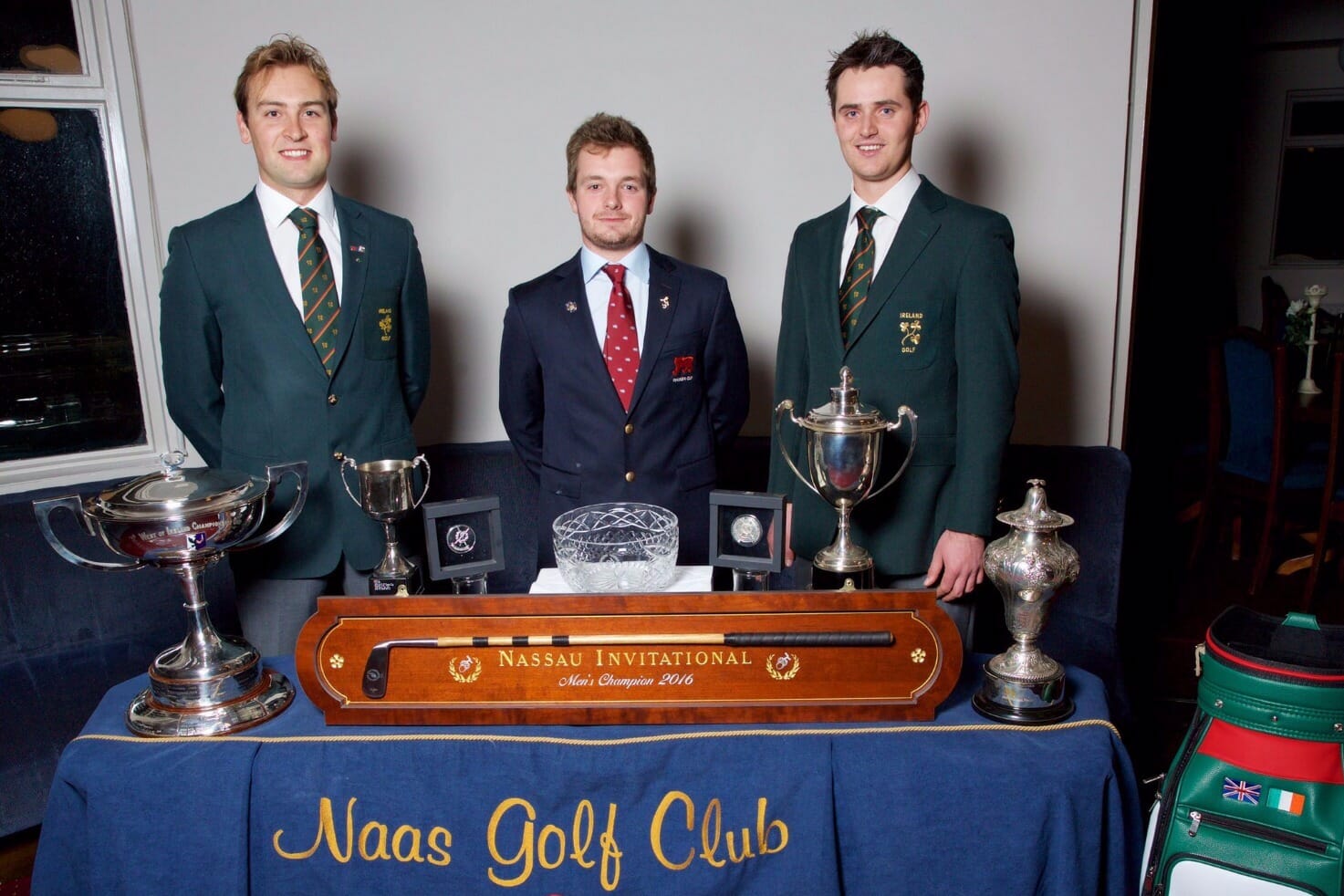 Hume, Yates and O’ Rourke the first of many champions from the Naas Golf Club Stable under Gavin Lunny.

If they had tried to dream it up, they never would have got this far. How could they have? 10 years ago, the lowest man in the club played off two. Back then, they didn’t even lay claim to the best golfer in their county.

Kildare has always been associated with thoroughbreds. If not foals, footballers. Naas, which is surrounded on three sides by racecourses, is an epicentre of the racing world. Until recently, this fertile ground was not accustomed to breeding golfers.

In the last five months, four major amateur titles have been won across the globe by three different Naas players. Coincidence? No one is that lucky. Reach back into the recent past and you’ll quickly understand how Naas has suddenly become a breeding ground for champion golfers. The year 2006 is a significant moment not least because Gavin Lunny was appointed head professional.

Lunny came through the junior ranks, representing Naas at the All-Ireland Junior Foursomes Final in 1992, and later earned a golf scholarship to Augusta State University. Coaching has been his passion ever since and it was back at his home club that he started working with juniors, prior to his appointment as head pro in ’06.

It was around that time that Naas made a significant change to their junior policy. Where previously children weren’t allowed to join until the age of 12, now the club was admitting juniors in their 10th year.

“It was my opinion that we needed to get them in younger and get them better younger, get them more involved in club teams and improving their own standard so that by the time they got to 18 years of age, they were less inclined to leave the club,” Lunny explains. “One of the biggest issues we had with junior golf was if they don’t come in until 12, by the time they were 18, unless they had a huge amount of exposure to coaching, they generally weren’t of a low enough handicap where golf had really bitten them or become part of their life. So as soon as college or work came long, they tended to give up their membership and there was an enormous drop off.”

Much more than unearthing fresh talent, this was a plan designed to secure the future of the club.
“Around that time, every club was making adjustments to its expenses,” Lunny recalls. “Clubs were coming up with all sorts of ideas of how to attract more members and generate more income. When we sat down and looked at it, there was no ideal marketing plan. The bottom line was there were too many courses and not enough golfers. That wasn’t something that people were going to change overnight. We looked more long term about it.”

Naas was always a vibrant club with a strong membership and so the economic downturn caused a tremor rather than an earthquake. People like the late Monica O’Connor and Brendan Ryan (who served as club captain in 2013) and current club chairperson Clive Browlee and more recently Brian Cagney were hugely influential figures within Naas and played a huge role in the club’s progression during that time.

A long-term junior development plan was put in place, which addressed all aspects of coaching and coaching facilities. Crucially, the club made sure that everyone benefited from this investment so that coaching was available to every member.
There’s an air of positivity around the club at the moment, you’d have to be here to feel it. Everybody’s very, very proud of their achievements. Everyone is somewhat in awe of the fact that we’ve gone so far in 10 years
A new 800sqft indoor coaching facility, a joint investment between Lunny and the club, has recently opened and upgrade work continues on the club’s short game area. The growth can be felt in the girls game also as Mary Flahavan is in charge of the girls golf development has seen growth from only 6 girls ten years ago to over 50 now with Annie Harper the lowest now playing off a 5 handicap.

“To believe in it and get behind it, the club had to see a benefit for the entire membership and not just one section of it,” says Lunny.

If you take 2006 as a starting point, when players like Jack Hume, Conor O’Rourke and Jonathan Yates had just started coming into the club, then the last 10 years have been a spectacular success. 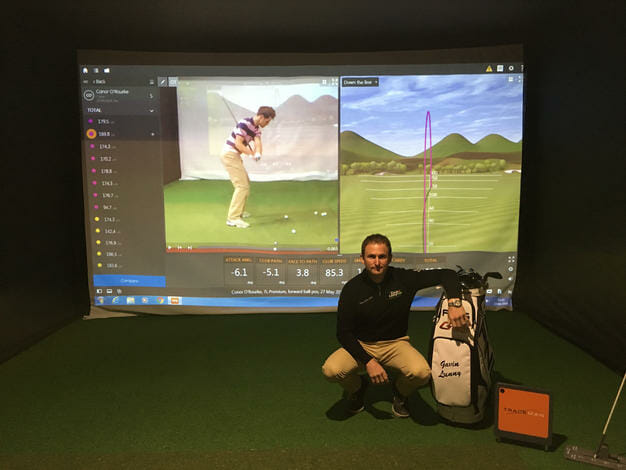 “There’s an air of positivity around the club at the moment, you’d have to be here to feel it,” says Lunny. “Everybody’s very, very proud of their achievements. Everyone is somewhat in awe of the fact that we’ve gone so far in 10 years. We’ve gone from the lowest handicap in the club being off two to having arguably the best amateur golfer in Europe and two guys who are not too far behind him. We have four major trophies in the club this season, it’s a remarkable story really.”

Yates and O’Rourke are the most recent winners but it was Hume who broke the mould when he won the West of Ireland in 2014. His selection on the Great Britain & Ireland Walker Cup team last year was another milestone for the club.

“When Jack won the West, when he got it over the line, I think that was a major breakthrough. That was the first time a member of the club had won a major championship and you knew then that would have a ripple effect and it was going to take everything to the next level when he did that,” says Lunny. “I never had any doubt the other two would follow, it was just a case of when and you just hope that they get the breaks.”

Hume won twice at the start of this season. His victories at the South African Stroke Play and the individual event at the European Nations Cup came in successive weeks and catapulted him into the world’s top 10. A month later, Yates followed in his footsteps at the West of Ireland.
“As an influence, Jack has been incredible,” said Yates after his victory at Rosses Point. “He’s taught us how to win.”

Lunny travelled down to Sligo on the morning of this year’s West of Ireland Final, setting out from Naas, in the dark, at 4am. “When I turned up in the car park, I was half an hour earlier than the time we said we’d meet and his (Yates’) car was already there. He was in the locker room warming up,” Lunny recalls. “He was just like a man possessed. He was just so determined to win that week and it was great to see somebody with their eye so focused on what he had to do. And then of course the pressure was back on to Conor.”

O’Rourke only come into the national panel at the end of 2015 and the 24-year-old was not exactly on a shortlist of favourites when he earned a late entry into the field for the St Andrews Links Trophy at the start of June. This was, afterall, one of the most prestigious events in the world.

“As much and all as the boys are great friends, he (Conor) did feel a bit like the bridesmaid and there’s a lot of pressure that comes with that. I give him great credit for being in that position and then going out and winning what is, outside the British Amateur and the US Amateur, the biggest stroke play event in amateur golf,” says Lunny of O’Rourke’s wire-to-wire win at St Andrews.
No doubt the next generation in Naas will take inspiration from these achievements but for all this success, Lunny knows that the club must remain grounded.

“We’re not professing to having a structure that’s going to produce world beaters in the next five to 10 years,” he says. “I think our first goal is to give them (juniors) an opportunity to play the game, give them an opportunity to reach a reasonable standard and then beyond that if they want to get better, then the resources and the knowledge-base is there to help them.”