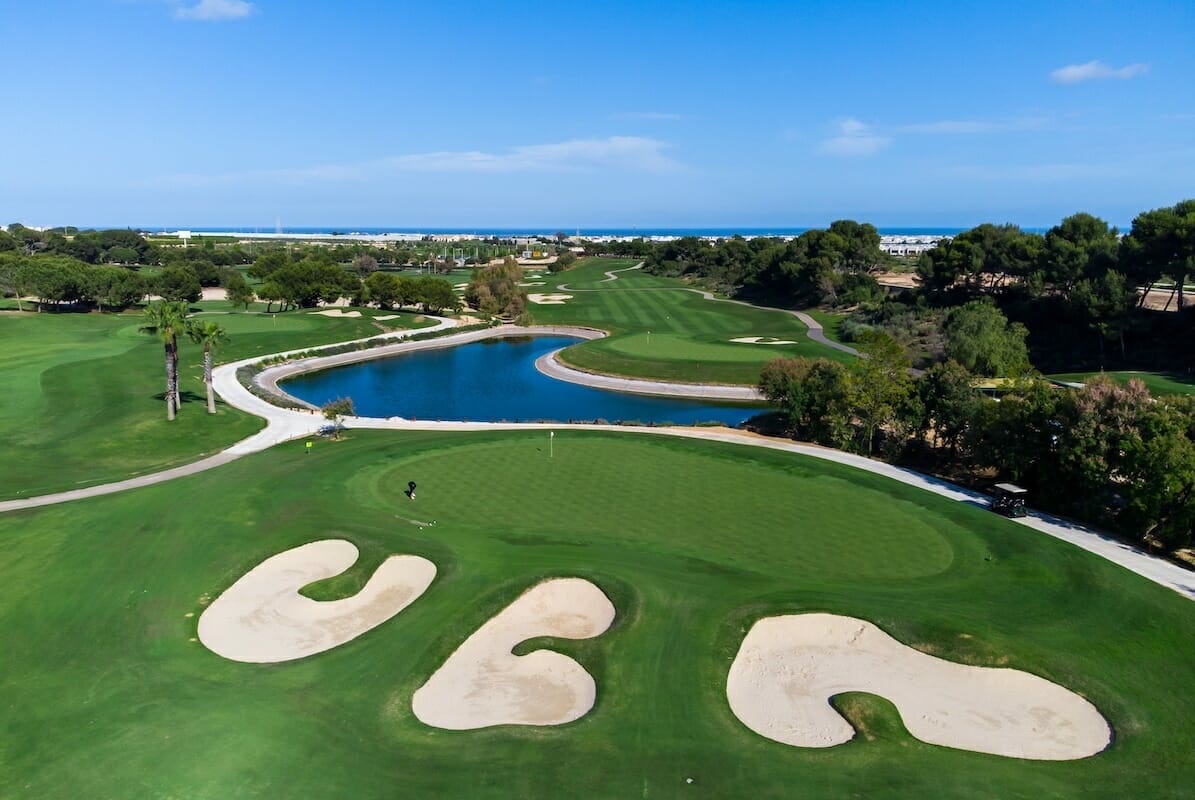 Lo Romero's difficult 8th green. 1st hole beyond it and 17th green on the left

Alicante in South Eastern Spain became my special holiday place over twenty years ago. I have enjoyed the ‘guaranteed’ sunshine, the warm waters of the Mediterranean’s Mar Menor, good value, good food, plus the many attractions of cultural importance.

Although I had been to La Manga in nearby Murcia and half-a-dozen other regions of Spain for golf tournaments, I overlooked Alicante as a mecca for golf until recently. The truth is I missed out on facilities better than most and have now played enough of them to be able to declare one as my special favourite.

Keen not to travel with Ryanair after the way I was treated when the Pandemic broke in March 2019, I travelled by ferry (Brittany Ferries Rosslare – Bilbao) and car this October, a most enjoyable journey which involved four spells of 2.25 hours at the steering wheel, including three short stops for a rest and a snack. We came back via Madrid, spending one night in Burgos. Then on to Bilbao through the most amazing large scale scenery of empty plains, natural parks, sierras, mountains and forests on a grand scale before catching the ferry home. The sea journey takes 29 boring hours but, who wants ‘excitement’ in the middle of the notorious Bay of Biscay?

Lo Romero Golf Club, 2.5 kms northwest of Pilar de la Horadada, which opened for play in 2008 has a formidable Slope Rating of 142 off the yellow tees, which places it right in the middle between no less than Valderrama and Sotogrande. How the golf course became the property of the locally-based, Jiménez family through its course construction and maintenance company, Desarollos y Contrata Golf, is an interesting story.

Beginning in 1971, local man Pedro Jiménez Ruiz (now a hale and hearty 88 years old) owned a bulldozer and was hired by the original owner of La Manga Resort, Gregory Peters, to clear the unwanted vegetation from the property he had purchased and ‘prepare it for golf course construction’. They soon developed a special, personal relationship that led to Pedro being engaged to build all three of the golf courses at La Manga. In the process Pedro became so expert that Desarollos y Contrata Golf was founded and a busy career of building over 50 golf courses all over Spain, began.

In the early 2000s, one of Spain’s most important golf clubs, Real Club la Moraleja, engaged Jack Nicklaus to design three new courses, which made it the biggest golf facility with the largest membership in a metropolitan area in Europe. By then, Pedro had been joined by his son, Victoriano Jiménez Ingles, who had taken over full responsibility. The entire Moraleja project took 5-years to complete followed by a four year maintenance contract. Victoriano has pleasant memories of meeting Jack Nicklaus on several occasions and chatting with him as if he were a favourite uncle – something to tell future generations, no doubt. 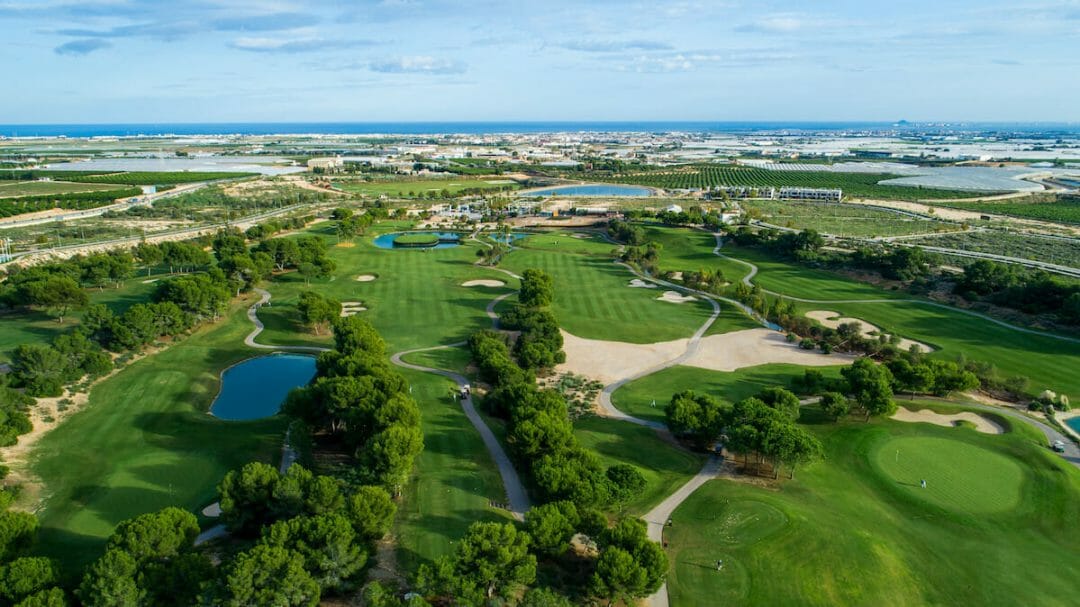 A drone overview of the finishing stretch at Lo Romero

When the contract to build Lo Romero in Pilar de la Horadada commenced in 2008, it was (literally) a project very close to Victoriano’s heart, he, having spent his youth in San Pedro del Pinatar nearby. Again, when the course was completed the owner demanded a long term maintenance contract be entered into. Gradually, Desarollos y Contrata Golf assumed the day-to-day responsibilities as the owners wanted to concentrate on property sales and real estate. A deal was done and the land on which the golf course was built became the sole property of Desarollos y Contrata Golf. Not many have built and own their own golf course, which creates a unique perspective.

From the beginning, sustainability into the future from an ecological sense was put above all else. Emphasis on making the course environmentally friendly has meant emissions from all equipment had to be eliminated; chemicals reduced to a minimum; no water wasted. The large flotilla of pristine golf buggies is cleaned without using water and any water put on the course is unfailingly recycled. The routing ‘wanders’ over gently undulating land. There are no ‘unwalkable’ hills and plenty of native bushes, trees, scrub, streams and lakes for wildlife to habitate and golf balls to avoid.

Without property sales interests, the golf course now receives all of the the attention and investment. The large, slanted greens are of such quality that they are professional tournament speed. The wide fairways afford unlimited versatility to suit golfers of all standards and shot shapes but could be squeezed to make for a severe examination, if desired. My favourite hole is the dogleg par-4, eighth. Off the tee, the cluster of trees down the left hand side must be given a wide berth but beware there is water awaiting on the right. Then follows a precisely measured middle-iron second shot over a phalanx of bunkers regardless of where the hole is cut and water lurking behind the green.

To describe Lo Romero in one word, I’d say: natural. If allowed two: beautifully conditioned; four words: ‘hard pars, easy bogies’. The gentle climbs and descents on the back nine are among Lo Romero’s best features. The course is quite long but it is a walking course that doesn’t depend on length alone to defend itself. Nowhere is this more apparent than on the 18th where a Pete Dye inspired, Sawgrass-island-green is the first and last topic of conversation amongst the golfers who have played it. The tactical approach towards playing the ‘devilish’, par-4, 13th, featuring the ubiquitous Spanish baranca, is part of any post-round discussions too.

At present, off-course facilities are basic but perfectly adequate. The staff are exceptionally efficient and friendly. Attention to detail and customer service is second to none. Green fees range from €50 to €89 depending on demand and the time of year.