And I ask you friend, just how good is Galway Bay ? 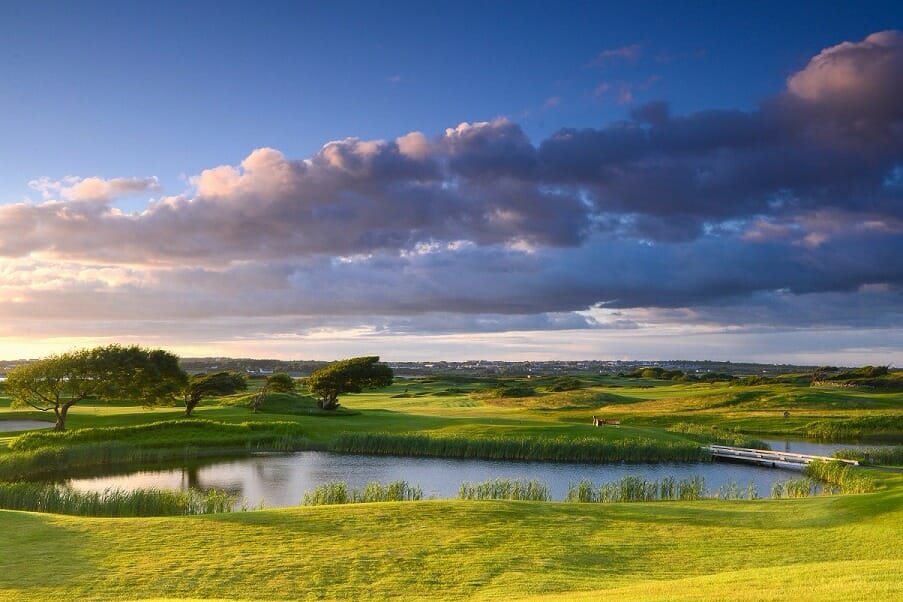 Is there a more appropriately, more descriptively named golf club in Ireland? I doubt it. From the clubhouse the land slips down to the shores of the bay. Across the water to the west is Galway City, while The Burren ripples along the horizon to the south. The bay is ever present and visible from every hole, and sitting in the clubhouse bar or restaurant afterwards displays the full glory below. Many of our greatest links can’t promise such a spectacle and it makes this golf resort very special indeed.

I’ve heard people complain that Galway Bay is a faux-links. It isn’t and it has never pretended to be. Just because it is beside the sea doesn’t make it a links. Look up the definition of ‘links golf’ and you will appreciate why that is the case. Galway Bay is a coastline course, pure and simple, and it is second only to Old Head in terms of coastline drama.

The Christy Factor
Christy O’Connor Junior designed Galway Bay back in the early 1990s. He carried out additional work in the 2000s, adding the extra scale and quality which would enable it to host a major tournament. He certainly never claimed this seaside course was a links so let’s hope that particular issue is put to rest.

In fairness, the course possesses features reminiscent of some Irish links – the gorse and two-tone cutting of fairways – but this is a unique course and there is nothing else like it in Ireland.

Christy’s designs can divide opinion but here he produced the most charismatic and exciting of his 16 Irish golf courses. Being a Galway boy he certainly put his heart and soul into it… and the team looking after the resort today is pouring that same passion into the place. Damien Coleman is the embodiment of that: as the Course Superintendent, working with a team of eight, he keeps the conditioning of the course as good as any I’ve seen.

“Having the opportunity to blend a golf course into this beautiful landscape makes greenkeeping a special and unique job in Ireland. It’s incredibly rewarding,” Damien says.

I played here in perfect conditions in the recent April ‘Masters’ event and the course was sublime. Played over two days it was most telling that the winning score was just 39 points. The greens were like velvet but the pin positions were tough.
“Yes, the pins were very tricky,” Damien told me at the time, “but they asked for Augusta-like pins and we did our best!”

They certainly did and while the big greens can look benign from a distance, once you get up close you realise just how good your putting will need to be. 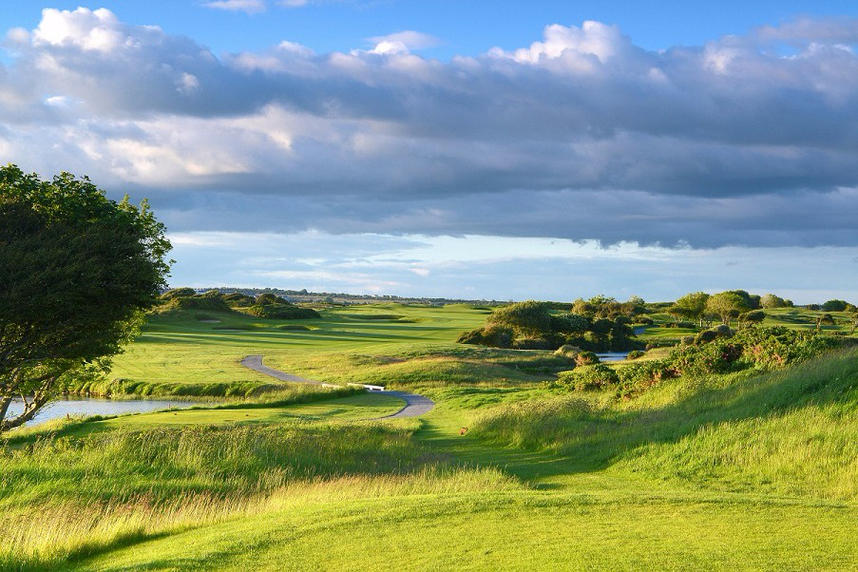 His efforts are appreciated by one and all, including the resort’s owner, Ronan Killeen, who has invested in considerable improvements and growth in the resort over the past couple of years.

“We have a new state of the art clubhouse facility which opened in May 2015,” says Ronan, “at a cost in excess of €1 million. Membership has been increasing year on year for the past three years by more than 10% and this will continue to rise. We are also working closely with tour operators, which has seen us record significant growth in this sector. Elsewhere, when the new road linking Galway to Shannon Airport is completed in August, we will see more traffic coming north of Shannon. We are continuously improving the course with Damien’s great work (bunker revetting, footpaths and continuous innovative work), while the appointment of new Head Pro, Dara Ford, has seen lessons and junior and Ladies memberships increase. Sheltered driving bays are also planned for our range before the end of 2017.”

The Course
The par 72 course is a big and professional affair – it has hosted the Irish Girls Close and Intervarsity’s Trophy, and will host the Carey Cup and the Irish Junior Open Series – with all the glamour and precision you’d expect of a first class facility. There are four tees to choose from making it a daunting 7,308 yards from the back tees and a good test of 6,453 yards from the forward Yellow tees. From the Reds it measures 5,605 yards.

Arriving in the club car park is one thing but walking around the clubhouse gives you a whole new perspective on what awaits. Several holes appear before you, slipping gently down to the water. There are scant few trees here so it is all on show… but what few trees there are make it clear the winds come predominantly from the south-west. Bent and cowed, those nearest the clubhouse weep in the direction of the 1st tee, practically pointing the way. A par five opener with the wind at your back – how nice is that! At 524 yards (Yellow tees) it is a generous looking start and yet a surprising Index 10. The 2nd, however, at 365 yards is in the opposite direction and Index 6, the perfect indicator of how the wind affects proceedings. 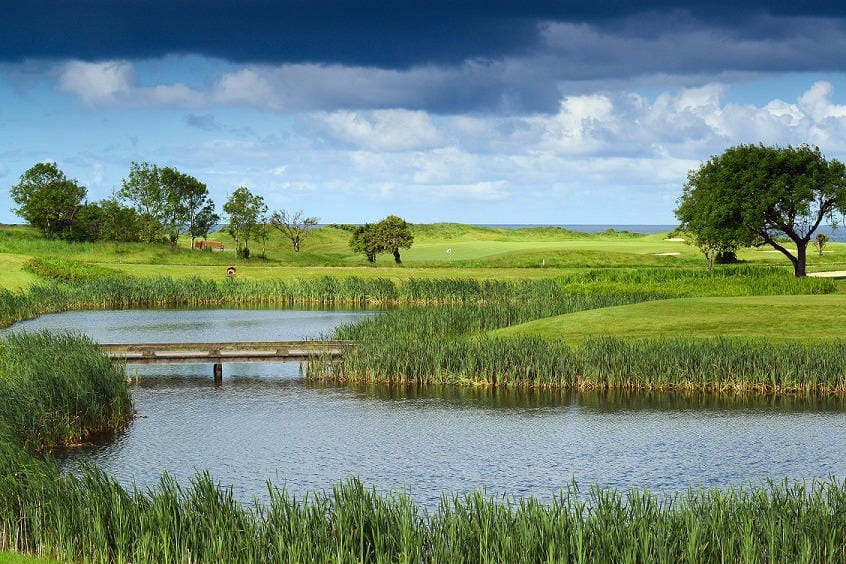 The course is laid out in two smart loops bringing you out to the water and back to the clubhouse. Only holes 1 and 2 perform a back-and-forth tango, while the spaciousness of the 300 acre resort ensures the remaining holes are well removed from each other. Mounding has been introduced to enhance that feeling but also to give a strong rhythm to the holes themselves. There’s no doubting that the course has been shaped and refined but it is important to note that it has not been overdone as the terrain has its own gentle swells and changes in elevation. It’s the ease with which these intertwine that emphasises how good Galway Bay is.

The variety of holes is excellent – just look at the par threes (one goes up, one goes down and two play over water) – and there isn’t a weak hole in the 18. The challenge, therefore, is picking favourite holes and, with so much variety, there are numerous holes to choose from. The acclaimed par four 12th is at the top of most lists, a remarkable left-to-right dogleg playing from a high tee down to the sea. It whips around a pond, through a medley of bunkers, over a ridge and then across more water to the green. Sounds complicated, doesn’t it… it is Index 1.

Holes 2, 3, 6 and 7 stand out on the front nine. Two par fours, a par five and a par three, respectively. There’s a real sense of adventure to the shots and the straight 3rd is so tempting from the high tee as it dips down and then rises to the green 400 yards away.

On the longer back nine the collective of holes from 11 to 14 is the main event. During the club’s Masters competition holes 11 to 13 provided Galway Bay’s version of Amen Corner. The 11th is a big dogleg, this one right to left (and therefore opposite to the 12th) and moving uphill. The steep banks in the dogleg mean you are unlikely to see the green for the approach shot so you will have to use a string of bent trees to establish your line as you fire up the slope. It is Index 3. The par three 13th may only be 162 yards (Yellows) but the green is a devil and it is Index 11. Making par through Amen Corner will always be a serious challenge.

The 13th and 14th tees sit side by side, right on the sea edge and this is probably the place to pause and reflect on the course which rises to the clubhouse. In a way, it’s the opposite view from the one that first greets you. It is no less exhilarating.

Galway Bay has 126 bunkers amounting to two acres of sand, and while they create well-positioned hazards they also add to the appeal of the course… that 12th tee shot being the most obvious example. They do attract balls but the fairways are generous and the greens are big, so – and how many times have you heard this – keep the ball on the fairway and you’ll be able to do yourself proud here, and have a huge amount of fun doing it.