This article could literally save your life

I wouldn’t be one for exaggeration so when I say that this article could literally save your life, I’m being deadly serious!

As a child I was most definitely an outdoor child and I played all sports.  Whatever sport was on the television I was doing it and loved every minute of it and I probably spent more time outside than inside. Sun, rain, snow it didn’t matter to me as there was always some sport that had to be played.

When I was 21, I Ieft a job in RTE to pursue a career in golf. I loved working in RTE and have great memories of my time there, but I wanted to be the best golfer in the world. The year was 1992. I knew I had to practice and I was going to practice harder than anyone else. I was going to make it. I practiced harder than anyone I knew.  I hit ball after ball hundreds of thousands if not a million of them. I was becoming a player. All year round I was outside. During the Irish winters I went to America, mostly Florida to practice more. I would spend at least 3 months a year in Florida mostly outside practicing. It was great.  Little did I know the dangers I was exposing myself to.

Like most Irish people who get exposed to the sun I would burn a bit, but once I got over the burning I would tan and never thought or understood the damage I was doing to my skin but then in September 2017 I attended Prof Fergal Moloney with a health issue. I had never met him before. I remember walking into his room across the road from the Mater Hospital having no idea what was going to happen next. Fergal began asking me questions about what I did for a profession. I explained I work at St. Margaret’s Golf & Country Club as Director of Golf. He asked did I spend much time outside. I said not as much as I used to. I told him a bit about my history and all the time I had spent outside throughout my life.

I had a small pimple on my forehead that I hadn’t paid much attention to. I had had it about 18 months I think and it had never caused me any problems. He asked did I use sunscreen. Foolishly I said, ‘Sure you wouldn’t need it in Ireland’. He explained that from all the time I had spent outdoors I had sun damage on my head, neck and hands. All the places I would have sunburned over the years.

He also said the pimple looked like a basal cell carcinoma and I should have it removed. He looked at my hands and my right hand was damaged more than my left mainly due to wearing a glove on my left hand all the time while practicing.

You hear all the time about people with skin cancer but when it is you sitting on the other side of the doctors table you get a shock. Once cancer is mentioned I think it’s only natural to worry. Fergal was excellent. He explained everything so well, which is always reassuring. He explained that basal cell carcinoma wasn’t the most dangerous of skin cancers. He said he would remove it and we would go from there. I got my date to go in to have my basal cell removed. I arrived, Fergal met me and explained again what was going to happen. He said the operation would be carried-out under local anesthetic.  The operation started and we had a chat about golf and golf club membership and in 15 minutes it was done. Fergal said he would send the piece he removed to the lab to have it analyzed and would call me when he had the results.

After the operation I had a large plaster on my head for a few days and rather than tell people what had happened I said I hit my head off the boot of the car. For some reason I just didn’t want to talk about it. I told very few people and maybe I just wanted to ignore it and hope it would be ok? I have since told some more people and now here I am blabbing it to the nation through this article!

Maybe I am unique but rather than sharing my story at the time, I just couldn’t face it. Skin cancer is a regular thing and lots of people have it. With the correct treatment it’s not one of the most dangerous cancers but it must be treated and it can be prevented. If I hadn’t gone to see Fergal about an unrelated problem and he hadn’t been as professional as he was I would never had done anything about my small pimple.

A couple of weeks later my phone rang, it was Fergal. ‘Hi John, I have the results of the tests’. My heart skips a beat I can’t even remember if I said anything. ‘It’s all good I removed it all, it was cancerous but it’s gone.’  I think I just said ‘Thanks’.

Golfers spend a lot of time outside and therefore have an increased chance of having skin cancer but you can take very simple precautions to reduce your chances of getting skin cancer.  In my case applying sunscreen has become part of my daily routine since that day. Every morning before I leave the house I apply factor 50 sunscreen which blocks both UVA and UVB. It is important to apply this every day as even on dull overcast days damage can still be done. I also carry a lip balm with a SPF of 50 and I ordered some long sleeved polo shirts. On top of that I’m trying to reduce the time I spend in the sun.

And so, given what happened to me, which I now know can happen to anyone I spoke with Professor Fergal Moloney to ask his advice, that I might pass it on, along with some information on this topic to you; 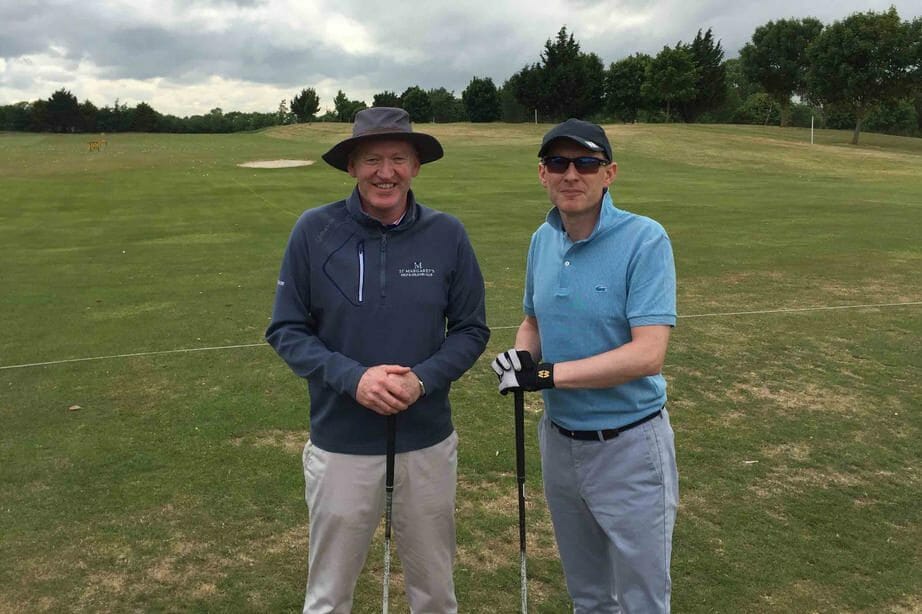 What are the chances of getting a skin cancer?
The risk of developing skin cancer varies from individual to individual and all skin cancers occur more commonly with increasing age. Exposure to ultraviolet radiation (UVR) in sunlight is the primary cause of most skin cancers.
Historically it was thought that UVB (which peaks with the midday sun and mainly causes sunburn) was responsible for skin cancers but it is now known that UVA (which is present from sunrise to sunset and is largely responsible for ageing of the skin) is also a significant contributor to skin cancer development. Most modern broad spectrum sunscreens effectively block against both UVB (as indicated by the Sun Protection Factor) but also UVA.

How would you notice it or know you may have a problem in the early stage?
For any suspected skin cancer, the key question is how long it has been present and whether there is any history of change.
As a general rule of thumb, changes or growths that disappear within days or weeks are often not skin cancer related. A skin cancer must be considered where a new lump or bump is seen to persist over months to years with associated increase in size.
Rarely a melanoma can appear and grow rapidly over a period of weeks.

What is your doctor looking for when checking the skin for possible cancer?
Skin cancers are categorised as either melanoma or non-melanoma skin cancer (NMSC).
NMSC include basal cell carcinoma and squamous cell carcinoma.
Solar Keratosis are precancerous lesion which are a marker for excessive sun damage and increased risk of skin cancer

A – asymmetry
B – border irregularity (edges are ragged or blurred)
C – colour variation (different shades within one mole) and change in colour distribution
D – diameter greater than 6mm
E – evolution, or has changed over time (i.e. bleeding, ulceration, itching, pain)

How can golfers protect against skin cancer?
While many golfers may be aware of the skin cancer risk associated with sunburns and cumulative lifetime sun exposure, the sun protective measures they employ are often suboptimal if not non-existent. This may be in part due to common misconceptions around the potency of Irish sun and in part due to practical reasons around sun protective clothing and sunscreen use / availability.
The following considerations are applicable to golfers of all ages and skin types but especially so for those with fair skin, multiple moles or prior history of skin cancer or sun damaged skin.

IGM would like to thank Fergal Moloney who not only took great care of our good friend John Kelly but also took the time to speak with him about the dangers and preventative measures golfers can take so he could pass them on.