Upskilling and education key to success for Coyle Diez

Sergio Coyle Diez is an experienced PGA Professional Golf Coach who is dedicated to improving his clients. He has become fascinated with human body movement, and particularly in the field of Golf Biomechanics as he attempts to bring his coaching to the next level. He is constantly improving his skills as a PGA Professional and has benefited from the mentorship of world leaders in Biomechanics.

Sergio began his career in the Real Club de Pedrena in Santander. He was inspired by his early mentor Seve Ballesteros and made the move to the professional ranks in 2011.

“He said, ‘Do you want to make money or play for your handicap?’

“I said I want to make money so I turned pro,” chuckled Coyle Diez who worked under Seamus Green in Elm Park to gain experience before becoming a professional.

Sergio lived in Spain for much of his childhood through his Spanish mother and it was in Santander where he would spend a lot of time with Seve. He would speak in Spanish to improve his vocabulary while Seve would speak in English for the same reason.

He was initially coached by José Antonia Bedia, while concentrating on the Spanish Tour and the Regional Pro Circuit in Cantabria. He achieved numerous accolades including a 15th place finish in the Spanish PGA Championship and a career highlight of winning his first professional tournament in Club de Golf Nestares.

Following a busy few years on the circuit, Sergio reached a crossroads in his career and at the age of 26, he took a break from playing professionally when he was appointed as Director of Parayas Golf Club in Santander. It was here that Sergio discovered his passion for teaching, and he made the decision to return home to Ireland to complete a PGA Foundation Degree in Professional Golf in conjunction with the University of Birmingham.

Keeping up to date with the latest technologies and coaching techniques has seen Sergio frequently travel back to the PGA Training Academy at The Belfry to arm him with the latest knowledge to use in his coaching.

“I had the game but not the head, so I decided to come back to Ireland and do the PGA, but I had no Leaving Cert so that put a pause on it,” he recalled.

“All I can remember was doing the Leaving Cert at 26 and haven’t looked back since.”

After Coyle Diez finished up in Edmondstown, he took up the role of Director of Golf in Waterford Castle. However, that proved to be an ill-fated stint, the practical side of being a PGA Professional was always the ticket for Sergio, so his next port of call was Spawell Driving Range recently launched by former European Tour pro, Peter Lawrie.

Coyle Diez joined Lawrie and co and opened his own golf studio in August 2020 and he intends on building an indoor facility for the winter months.

Spawell is where the Irish/Spaniard gives lessons in biomechanics to golfers of all levels. When we spoke, he had just finished teaching. 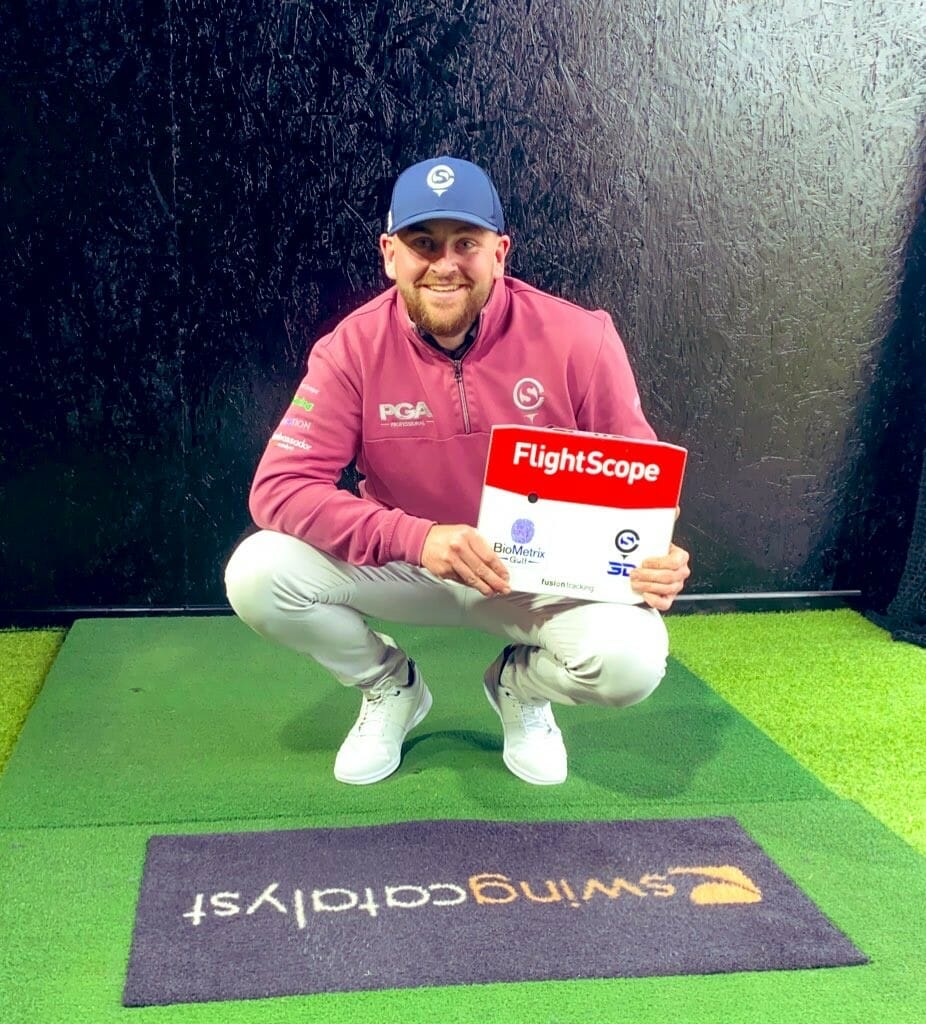 Golf Biomechanics is the analysis of human motion using the principles of physics and physiology. A deep understanding of biomechanics allows for increased sport performance while decreasing the potential for injury.

Analysing and understanding how muscles, bones, tendons, and ligaments work together to produce movement is key to appreciating subtle differences in the golf swing and minimising injuries whilst enhancing performance.

The golf swing is a complex movement, influenced by anatomy, physiology and psychology. Golf Biomechanics can maximise the distance and accuracy of your shots. Sergio’s niche is translating the research and raw data into an understandable guide for golfers of all levels.

“There used to be a tradition with amateurs looking for a quick fix so we are trying to find out how we can get them moving more fluidly without being injured to give them results, and then we can get more technical for certain aspects of the swing and movement patterns.

“It’s for everybody. We had a golfer getting lower back pain and looking up a lot of YouTube videos to try and get the answer, and he came to us and what we found was he couldn’t load correctly into the right hip. As a result, his spine went into reverse which creates a lot of tension. By improving that, the pain went away. It won’t happen straight away but over time it will.”

The COVID pandemic has been a struggle for everyone but in those struggles have come beacons of light and innovation. Coyle Diez has certainly reaped the benefits of lockdown and come out the other side a rejuvenated person who has found his passion.

“Lockdown was the best thing ever,” he said.

“I started organising online webinars for coaches and I saw an opportunity to get guys to upskill. I met a guy called Alan Morherd who was the pro in Powerscourt before moving to Spain. He got me into knowing more about biomechanics and I just kept grinding through the topic. I got access to my partner’s library through the Royal College of Surgeons. I was just fascinated by what could happen if I could get a certain player to move a certain way.

“I went from ten in the morning to half six in the evening just studying and kept doing it for a year and a half and it has gotten me to where I am now and I seem to understand more than what I did before. There are other days where I feel like I don’t know the answer and that makes me more motivated to go and study.”

The Dubliner has a thirst for knowledge about biomechanics and he has already delved into the next stage of how he can revolutionise his coaching by understanding how the foot function works within the ground. Watch this space.

For golfers who want to book a lesson with Sergio, they should know it isn’t a case of showing up, hitting balls and getting told what they are doing wrong. He uses a range of technology with the help of 3D data and physio Mike Murphy to determine what the player can do and why.

“We get the players to go to Mike Murphy who was a physio on the PGA Tour and he gives them a screening to see what their range of motion is and the report is sent back to me,” Sergio said.

“We get them hitting shots with a 7-iron or driver and they put on a 3D suit.

“We look at the data and the physical report so if a player tries to do something we can decide whether they are physically able to do it. They will go to Mike to improve those movements and I give some drills to implement into the golf swing.

“We have GolfCoach App so we can keep on top of them and we exchange videos to make sure they execute the drills.

“I use Swing Catalyst, FlightScope, Bull 3D System and a Viper and G4 system. I am looking into getting Quant because I want more accuracy in club face data which would cost €22,000 so it is expensive.

“Golfers are genuinely open to the technology because they can see the results. There is no guessing, it is all fact. If we have facts we can’t lie about it.

“We don’t really get technical in the summer because it is on season so we are looking at stats and seeing how they can gain shots. In the winter, I would be a lot busier with the technical stuff where people want to put in the hard work.”

Speaking of putting in hard work, Sergio has launched a 12-week bundle reload to help players improve their golf. Rather than coming for a lesson and returning in six weeks’ time with the same problem, Sergio has developed a structured programme to guide players through biomechanics. It is a hands-on approach, meaning after a lesson, a player will be given a follow up, a phone call to monitor their progress, and a lesson every three weeks. The package has proven to be very beneficial to golfers of all levels.

“It’s more to stop people coming for a lesson and going away for two or three months then coming back with the same problem, this gives them structure,” Sergio added.

“We have a client who broke 100 for the first time. He committed to the 12-week programme and he texted me last week saying he broke 100 and he is delighted. He rang me one day saying he was going to give up the game, but he stuck to it and it happened for him.

“He has signed up for another programme and he wants to break 90 and hopefully we can get towards breaking 85 and you never know where it can lead to.”

Whether you want to break 100, 90, 80 or shoot a 69 in your senior scratch cup, Sergio Coyle Diez has an innovative way of teaching you how to play golf with his fact-based analysis. Certainly one of the great thinkers of the game, Coyle Diez is incredibly dedicated to his craft and is a real student of golf, and he is constantly updating his methods by applying what he studies to his lessons.

It’s no wonder Sergio Coyle Diez is such a valued member of the Spawell team.

Lowry: “Tiger Woods is one of the reasons I started playing golf”