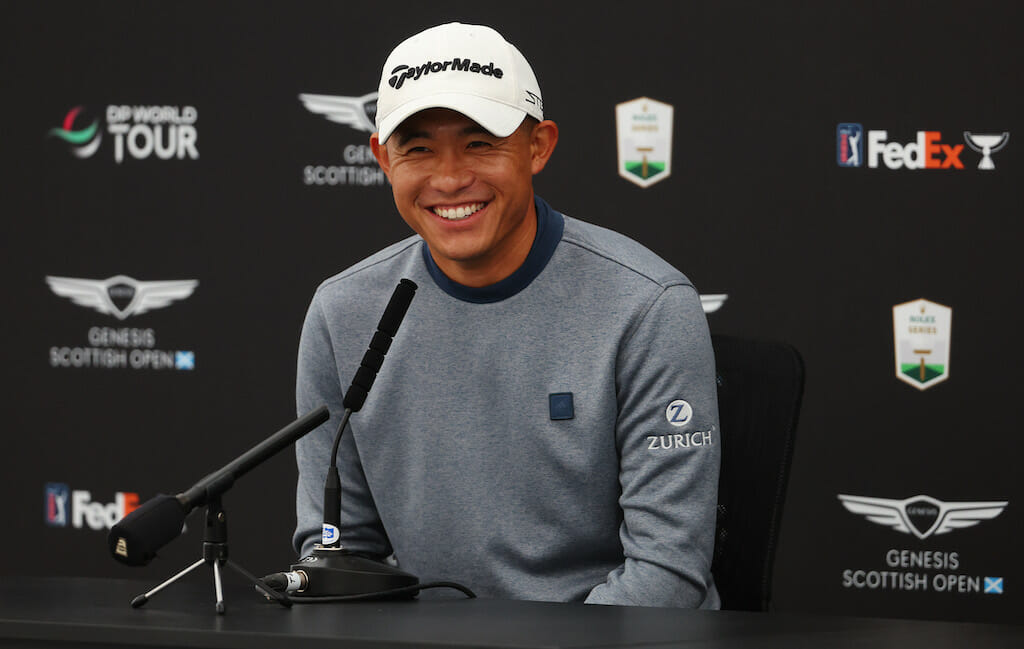 By Fatiha Betscher at The Renaissance Club.

Collin Morikawa could not have summed it up better when asked what it means to be heading to next week’s Open Championship at St Andrews.

The winner of the 149th Open Championship is the defending champion heading into the 150th staging of golf’s oldest major on the famed Old Course at the Home of Golf.

Of course, Morikawa is contesting this week’s 40th edition of the Genesis Scottish Open but there is no getting away from the importance of next week for the 25-year-old, and current World No. 4.

“Next week?” he said when asked his thoughts on heading to St Andrews for a maiden time in his golfing career.

“I could say a mouthful of me being defending champion,150th Open, at St Andrews and Tiger Woods is playing again. I mean, does it get better than that? It’s tough. It’s tough to beat that.”

However, the excitement of teeing-up this week along the Forth of Firth is again, as has been the scenario in recent weeks, coloured by talk of LIV Golf.

Yes, there is a number of LIV golfers competing this week including Ian Poulter and South African Branden Grace, winner of last week’s LIV event in Oregon but yet again, the DP World Tour has separated them from the rest of the field; well at least for the opening two rounds, by putting them out first on both days.

South African Justin Harding and Spaniard Adrian Otaegui are out at a two-ball first at 7.15am while Grace and Poulter are out as a two-ball to lead the afternoon half of the field, teeing-up at 12.25pm.

The four, clearly being ostracised from the remainder of the field who are out in normal three-balls for the opening two rounds, will then rotate to be out first on day two.

Morikawa, on the back of Billy Horschel’s point blank comments on Tuesday, was asked his reaction to the likes of Poulter and Grace teeing-up this week in a DP World Tour event.

“When it comes to talking about Ian Poulter, I think we have many other stories we can talk about, right? There’s a handful of players that are coming from LIV that are playing this week, but I don’t think that should be our focus.

“I mean, I’m sure Robert MacIntyre is going to be a very big story this week. But there are a lot of other guys, not just ourselves, like yes we get a lot of the attention, sitting up here playing well in the world but who knows a guy, number 30 in the world might be one of the best stories we’ve never heard of because he hasn’t shared that or had that opportunity to share. Yeah, there’s that.

“So, if someone says it’s frustrating and they compare it to Billy Horschel, does that mean they are all staying on the PGA TOUR? It’s funny because we all have our opinions, right, and we all have what we want to say but all we want to do is focus on each week and focus on the tournaments. So that’s why I said it at the U.S. Open because we are here at Brookline because there’s a lot of history and I don’t care about anything else.