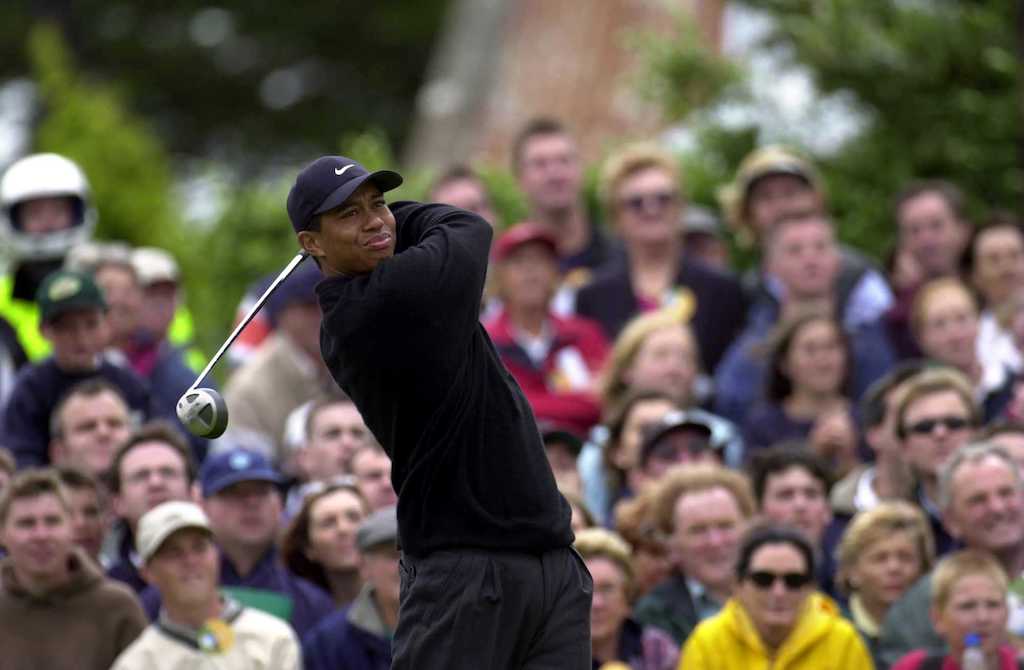 10 Jul 2000: Tiger Woods of USA plays his tee shot on the 11th hole in front of a packed gallery lining the hole from tee to green during the first round of the JP McManus Pro-Am at the Limerick Golf Club, Limerick, Ireland. Credit: Stephen Munday/ALLSPORT

After a highly successful (miraculous, more like) comeback at The Masters, Tiger Woods turned his thoughts towards competing in the 150th Open Championship at The Old Course in the middle of July. The question of a well-rehearsed, routine of coming to Ireland to prepare on our links and play in the JP McManus Pro-Am at Adare on July 4 and 5 was raised. It was not long before he confirmed that he would be returning to County Limerick for JP’s iconic event.

The atmosphere of expectation at Limerick Golf Club on Monday, July 10, 2000, was electric. Tiger had flown from Chicago during the night having competed in the Western Open the previous afternoon. After three hours of sleep at the Adare Manor Hotel, he arrived by helicopter to a rapturous greeting by a privileged crowd that was strictly limited to 8,000.

On arrival, Tiger said, “I am feeling tired, but I’ll be okay once I start playing.” He then proceeded to go around the tree-lined, tight, wind-swept, course in a trouble-free 64 blows. I did not see a shot because I was assigned to duties elsewhere. But, when I arrived at the club on Tuesday morning, I was shocked to be told that I would be the walking score keeper with Tiger’s group.

The wait for the world’s number one golfer to arrive was unnerving. When he eventually stepped onto the tee, he walked straight past me and greeted a young boy in a wheelchair. He came back and did a few stretches while I asked the amateurs for their handicaps? Then, looking Tiger straight in the eyes, I asked him for his handicap too. He gave me a big smile, and I relaxed. The paparazzi began taking group photographs. I stood in too and I said to Tiger: “You must be sick of photographs.”

“No problem,” he replied. “I will stay here all day for photographs. Just do not ask me to sign anything!” That put an end to my plan to have him sign the half-dozen caps I had with me belonging to family and friends. Later, I appreciated that if Tiger stopped for just one signing, there would have been pandemonium.

Playing with Tiger were three fellows who had won the qualifier at Nenagh: nine-times Irish Champion jockey Christy Roche, a five-foot-nothing with Popeye arms, playing off 11. Christy could drive the ball like a scratch man right-handed, but his left-handed putting was abysmal. Tom Harty, a 12-handicap farmer, wore his yellow shirt daringly unbuttoned and a black woollen hat. How he survived in that headgear in the warm sun, I do not know but he was a cool customer underneath. Straight off, he and Tiger had the banter going. The third man was eighteen-year-old Kieran McManus, a fifteen handicapper and J.P.’s son. Just before a ball was struck somebody in the crowd shouted at us hangers-on milling around to: “Get down!” As if choreographed, we all ducked down onto our hunkers, including Tiger, which got a big laugh.

As we walked down the first fairway, I attempted to get a conversation going that I thought might engage Tiger. His ears pricked up when I told him the details concerning Alister MacKenzie’s interventions on my home course in 1928 and that Walter Hagen played an exhibition at Ballyclough in 1937. “You kidding me?” He asked.

We had a long delay on the sixth tee. Tiger had noticed that Tom Harty had already launched a couple of impressive tee shots with his battered and paint-less, wooden-headed three-wood. The bamboo-like flex in the shaft intrigued Tiger. He asked if he could give it a waggle? As Tiger amused himself with the suppleness of the shaft, Tom pulled Tiger’s driver out of his bag and gave it a ferocious swish.

“I bet you a pound that if I use yours and you use mine, I will outdrive you,” challenged Mr. Harty.

“You’re on,” replied the Tiger.

Tom went first and hit a screamer. Tiger found the bend in the shaft uncontrollable, and he mistimed his strike. The ball hooked violently and only flew two hundred yards. A clear win for Harty! That got a conversation going on equipment and a bit of swing theory. Tiger emphasised the importance of connecting the swing of the arms to the body so that everything moved together. I asked him how to achieve consistency?

“Hit the ball one way all the time unless you absolutely must go the other way. Play whichever way is most comfortable to your eye and the way you see the shots.” When I said: “Tiger, I haven’t seen you really going after any shots yet. Every shot is a low punch.” He said he was practicing trajectory control for St Andrews.

The McManus Pro Am, which began in 1990, has been a force of nature in the manner it has brought local golf club members together as volunteers. All answering the call to help the event run smoothly while, at the same time, raising incredible sums for local charities thanks to the wholehearted participation of a galaxy of world golfing stars and celebrities. JP deflects all praise and says that the success of his event is due entirely to the efforts of the volunteers and diligent preparation by his hand-chosen organising committee.

The inaugural Pro-Am in 1990, hosted by Limerick Golf Club, attracted 42 amateur teams and many of Europe’s leading professional golfers. €1.2 million was raised for local charities and an Englishman, Roger Chapman, took home the trophy.

When the European Tour became involved in managing the second edition in 1995, also at Limerick GC, its stature was boosted and made it easier to attract more superstars to play. This time the top professional prize was shared between Paul Broadhurst and Richard Boxall.

In 2000, Limerick Golf Club hosted the Pro-Am for the third time. Over 15,000 spectators enjoyed glorious weather and two fantastic days of golf. Tiger’s skills that won three of the four Major Championships that year were on full view. When the proceeds were added up (including the monster auction at the closing banquet), a significant increase in funds, totaling €19.8m, was raised.

With the tournament’s profile now beyond all expectations, a bigger venue was required. The 2005 Pro-Am moved to a new home – the magnificent Adare Manor. Almost 9000 golfers took part in the pre-qualifiers organised by the beneficial charities. Tiger, Phil Mickelson, and Ernie Els as well as the usual collection of golf-mad celebrities with famous faces played. Ireland’s Padraig Harrington lifted the trophy, with Charleville Community Care fielding the successful winning team. €31m was allocated to 56 charities.

The tournament continued to go from strength to strength and in 2010 spectators were treated to an ever-increasing line-up of world class golfers. Among the celebrities who supported the event were film stars Samuel L. Jackson, Hugh Grant, Michael Douglas, and Catherine Zeta-Jones. Over 40,000 spectators per day on the golf course enjoyed perfect weather and wonderful golf. The breath-taking sum of €43.7m was raised. Darren Clarke took home the trophy and donated a hefty portion of the winner’s cheque back to the charity pool.

The Pro-Am will return for a COVID-delayed, sixth staging on the 4th & 5th of July at Adare Manor. A revamped and upgraded golf course by renowned architect, Tom Fazio will prove as much of an attraction as the famous personalities taking part. After all, the Ryder Cup will be played at Adare in 2027 but there is no denying that the majority of spectators will be there to catch a glimpse of Tiger.