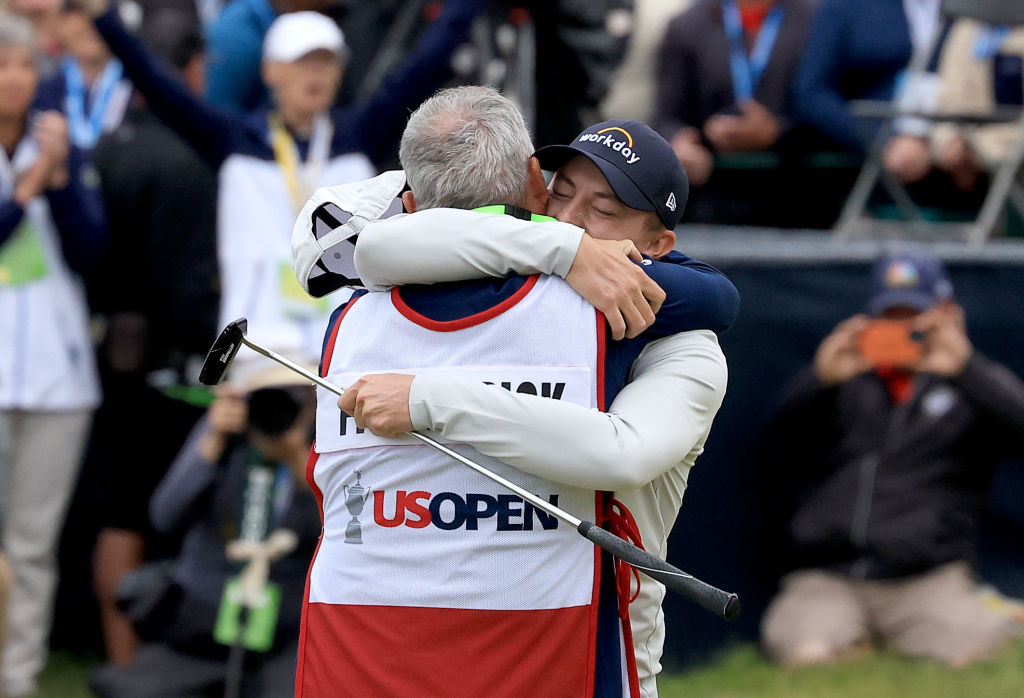 Matthew Fitzpatrick embraces his caddie Billy Foster after they realise Fitzpatrick had won on the 18th hole during the final round of the 2022 U.S.Open at The Country Club (Photo by David Cannon/Getty Images)

It was a truly family celebration when Matthew Fitzpatrick became golf’s newest major champion in capturing the 122nd hosting of the U.S Open at Brookline.

Fitzpatrick, 27, overcame finding a fairway bunker down the 72nd hole to safely find the green and two putt for par and win by a shot with a closing 68 for a six under total.

As soon as Fitzpatrick became the third Englishman to win golf’s second oldest major in 52 years he was greeted by his parents, his brother and so many other supporters looking to hug the new champion. Among the dozens present on the final green was Rory McIlroy.

The last round was gripping theatre with so many vying for victory, including World No. 1 Scottie Scheffler and hapless Will Zalatotis, with both sharing second place.

In the end it seemed only fitting that Fitzpatrick should have the victory medal placed over his neck and be handed the trophy, nine years after his brother caddied for him when he claimed the 2013 U.S. Amateur on the same Boston course.

“It’s what you grow up dreaming of,” said Fitzpatrick. “It’s something I’ve worked so hard for for such a long time. I’ve got to give myself credit: I had so much patience.”

True golf observers will recall Sandy Lyle’s 72nd hole fairway bunker shot to capture the 1988 Masters at Augusta National, with Fitzpatrick avoiding disaster as befelled him at the Memorial, to find the green and safely two-putt for a major championship winning par.

“Yeah, I’ll be honest. One thing that I’ve been really struggling with this year is fairway bunker play. Had a good session at US PGA, and my coach kind of helped me a little bit. Still not 100 percent out of it,”  saud Fitzpatrick.

“One good thing is the way the lie was is it forced me not to go towards the pin. It kind of forced me to go well left anyway. If I had to hit straight, it was kind of a chip across the green or whatever it was.”

Fitzpatrick, who collected a cool $3.1m for his victory now shares with Jack Nicklaus the honour as the only two men to win both that and the US Open at the same venue – Nicklaus achieved the feat at Pebble Beach.

He is also the first non-American to win both titles and he joins 1970 champion Tony Jacklin and 2013 victor Justin Rose as modern-day English-born winners of the US Open.

One of the more memorable sights on Sunday was Fitzpatrick’s caddie Billy Foster kissing the 72nd hole flag before removing the flag  as he is permitted, for keepsake.

Foster, who caddied for Seve and was on Lee Westwood’s bag for many years, is fittingly to be honoured at next month’s Association of Golf Writers annual dinner ahead of the 150th Open in St. Andrews, for his services to golf.

And Fitzpatrick spoke of what his win meant to both Foster and himself.

“It means the world to Billy. I can’t tell you how much it means to Billy. It’s unbelievable. I know it’s something he’s wanted for a long, long, long time. To do it today is incredible”, said Fitzpatrick who has moved to the new World No. 3.

“We ended up working together. I was kind of in between caddies. He just split up with Lee, and just happened to work out.

“It’s so funny. He kept telling me the first time on the job, I’ll just do 25 weeks and maybe get a fill-in for the others. I think he’s had about two weeks off in four years, so yeah”.

Next for Fitzpatrick is the 150th Open Championship, and an Old Course yhat the golfer who was born in Sheffield knows all so well.

“It will be great. I love playing St. Andrews. It’s a great golf course,” said  Fitzpatrick. “t’s going to be interesting, obviously, with the length and everything. And now I’m a bomber, I’ll probably be driving most of the greens (laughter)”.

“Yeah, I’m looking forward to it. I’ve got two weeks off now, which I couldn’t be happier about. Get my head around a few things, and then I guess.”