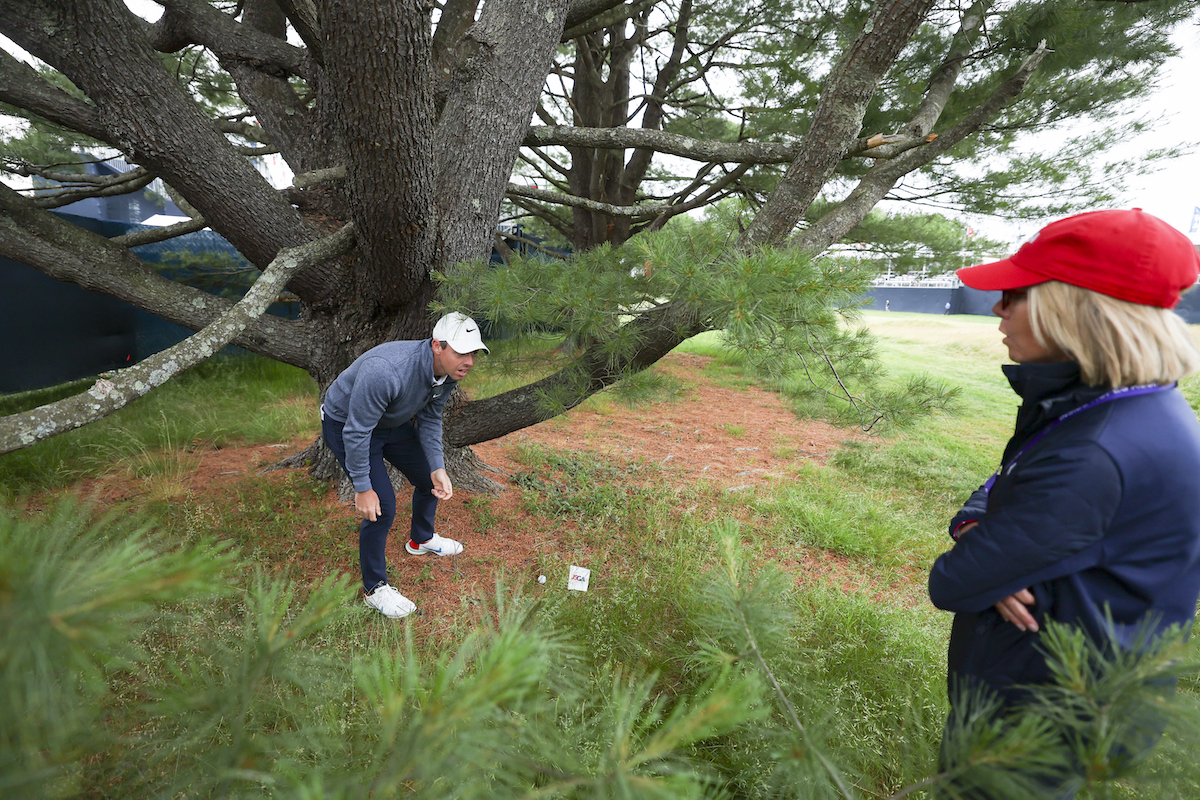 Rory McIlroy, left, talks with a USGA rules official after his wayward tee shot ended up under a tree at the 18th hole during the third round at the 2022 U.S. Open at The Country Club in Brookline, Mass. on Saturday, June 18, 2022. (Chris Keane/USGA)

Rory McIlroy was back pedalling early on moving day at the 122nd U.S. Open at Brookline and ended the round with half-a-dozen pars to remain well in sight of victory in suburban Boston.

McIlroy, and very much not alone atop of the board, struggled in the cooler and strong windy conditions on day three posting a third round 73 to be tied in seventh place but only four shots from the front at Brookline.

Defending US Open champion Jon Rahm birdied three of his closing four holes in his round of 69 to lead the field by a shot at five-under. A year ago, Rahm became the first Spaniard to capture a U.S. Open and now he’s 18-holes shy of making it back-to-back triumphs.

American Will Zalatoris, who lost a play-off in last month’s PGA Championship, signed for a ‘best of the day’ 67 to be sharing second at four-under with England’s Matt Fitzpatrick, who birdied three of four holes from the 14th, in his score of 68.

McIlroy along with Sam Burns (71) and Joel Dahmen (74) share seventh place on one under but only three from the front.

Just seven players among the remaining 64 in the field managed to break par in the tougher day three conditions.

Zalatoris summed-up the day saying: “It was brutal out there. When I made a mistake, I made sure I was on the fat side of the green or having room where I could maybe at least chip one up there to 8, 10 feet.

“I think it took a lot of discipline today. I mean, we didn’t aim at a single flag even with some wedges just because you really only have a foot or two to deal with on these greens in some situations.

“Normally guys out here when they have wedges in their hand, they’re firing at pins no matter what the situation was, but it’s just a lot of patience and giving myself as many 15- to 25-footers as I could, and obviously, a couple happened to go in today, and it felt pretty good”.

McIlroy, as the 2011 U.S. Open champion, was off to a wild start when he was left off the opening tee and though he saved par, his day was not helped when he bogeyed three of his opening six holes and dropping back to one-under on the host Brookline course in suburban Boston.

McIlroy had struggled early on day two in taking a double-bogey at the third hole, and a day later he was making a mess of the second and third holes, and then missing the green well left at the par-3 sixth and finding himself taking a third bogey in four holes.

It was not till the par-3 11th hole McIlroy grabbed a first birdie of his round, landing his tee-shot some 12-feet shy of the cup but then producing an overdue right hand fist pump when his putt disappeared into the cup.

However, the delight was short-lived with McIlroy dropping a shot at the next, the par-4 12th hole.

After pars at the 13th to his 17th holes, McIlroy’s drive down the last looked as wild as his first drive of the round, heading also way left but with McIlroy being line of sight relief from a temporary structure and ending his round with six successive pars and sharing seventh place.

“I think to finish under par for the tournament still was a really good result, that tournament could have got away from me today,” McIlroy said afterwards.

“It was one of the toughest days on a golf course I’ve had in a long time,

“I just needed to grind it out, and I did on the back nine,” said McIlroy who hit only six fairways. “You know, to play that back nine at even par today was a really good effort, I thought. Just kept myself in the tournament. That’s all I was trying to do. Just keep hanging around. I felt like I did well to get it in under par for the tournament at the end of the day.

“I holed some really good putts for pars coming in. 13, 15, great up-and-down on 16, good putt on 17. Then was really fortunate at the last to get that drop from the grandstand and be able to hit it on the green from there. It wasn’t the greatest of starts, but sort of steadied the ship a little bit and happy to get it in a few lower than it could have been.”

“I felt like i got a couple of bad breaks on the front nine, so that break on 18 definitely made up for them.” McIlroy will tee it up with Sam Burns in the final round in the fourth last group at 19:12 Irish time. 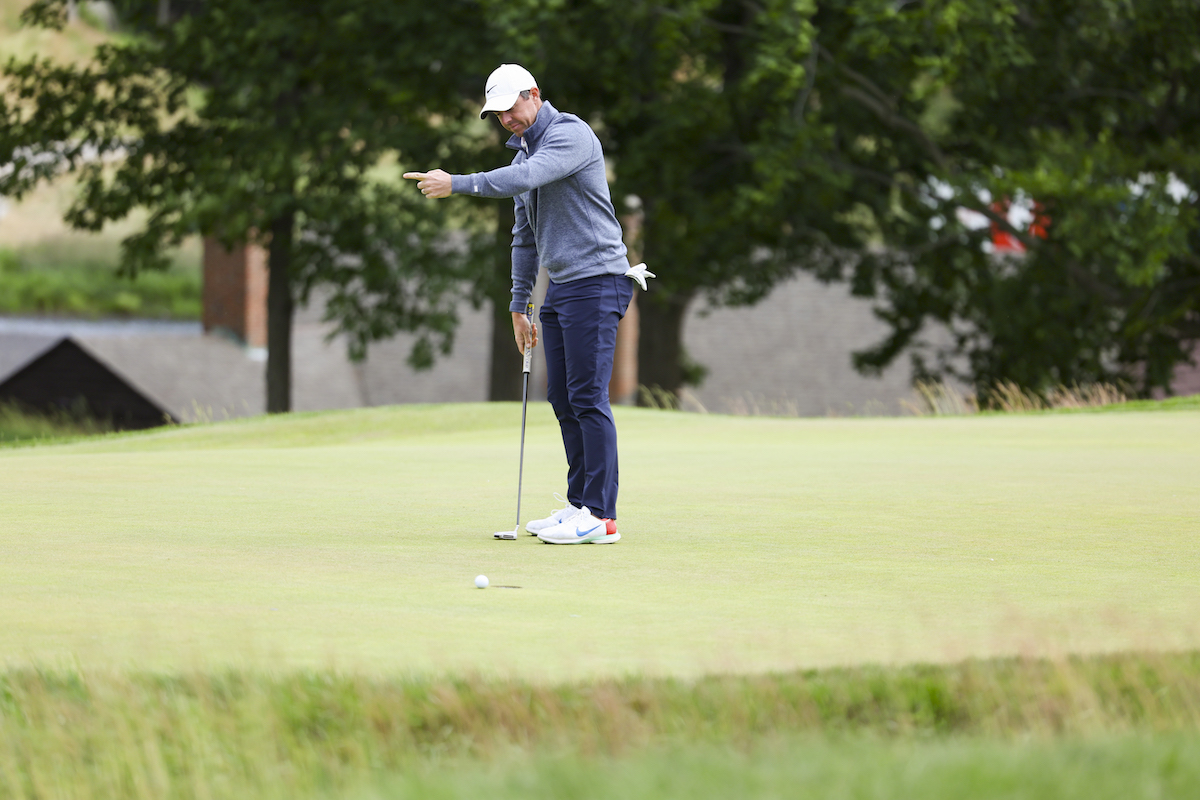 Rory McIlroy reacts to missing his putt on the seventh green during the third round at the 2022 U.S. Open at The Country Club in Brookline, Mass. on Saturday, June 18, 2022. (Kathryn Riley/USGA)

The USGA, as organisers of the 122nd U.S. Open has announced the breakdown of prize-money for the championship. The top-10 will be earning as follows from the overall $17.5m purse.