We’re back at Brookline and my blood’s still boiling 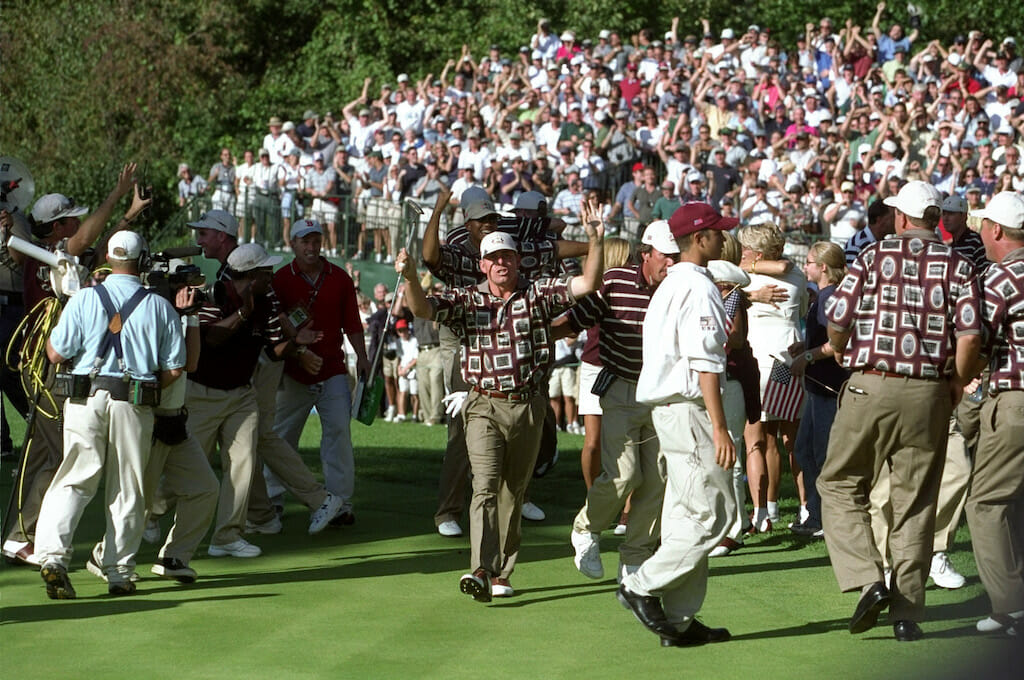 26 Sep 1999: Justin Leonard tries to clear the celebrating American team off the green after sinking a long birdie putt on the 17th during the final day of the 33rd Ryder Cup at Brookline Country Club - Credit: Andrew Redington /Allsport

Call it lingering post traumatic stress disorder but no sooner is Brookline mentioned in conversation and I’m flickering with an anger I thought I’d long since suppressed.

You see, I was born in 1990, back when East and West Germany were reunified, Nelson Mandela was freed after 26 years of wrongful imprisonment and Packie Bonner controlled the collective breath of our nation.

Nothing compared to 1990, or at least that’s what Sinead O’Connor and her solitary tear told us. Even Pavarotti belted out Nessun Dorma for the first back then; Dad holding me aloft like Simba in the Coombe, or ‘Captain Fantastic’ Mick McCarthy might the World Cup.

The point is, life was good in 1990, so I’m told. Even hopeful. The turn of the decade left behind a prolonged recession and not even that bastardo Schillaci could dampen the spirits of a nation nurturing the prospects of a decade of prosperity ahead.

I was so close. SO CLOSE to making it to the Millennium without spite. Sure, I had my moments along the way, not least when the flappable David James lived up to his name, flapping at a David Beckham corner in the 1996 FA Cup Final. The ball would end up at Eric Cantona’s kung-fu kicking feet, the Liverpool players avoiding his volley like the plague before it found the back of the net.

That was a tough pill to swallow, made all the tougher by my mouth full of Smarties comfort eating through the agony. But for the most part, I was happy back then. Innocent. A young kid with his whole life ahead of him. Then America happened.

The 1999 Ryder Cup, or the ‘Battle of Brookline’ as it’s become known, remains my earliest golfing memory. In truth, it was a miracle I saw it at all.

Stuck in the dark days of terrestrial television, and without the means to attach a NASA approved satellite dish to the gable-end of the house, my hopes of watching clung to the old box television in my parent’s bedroom and its pair of bunny ears for aerials long enough to probe about in space.

Strange things happened inside that TV. Most days it boasted 99 channels: RTE 1, Network 2, TG4 and 96 different shades of snow screen. But some days the satellites would take notions, perhaps obeying orders from the statue of the Virgin Mary perched opposite on Mam’s dresser, no doubt sick of hearing Miley and Biddy bickering on Glenroe.

The mother of Jesus deserved more viewing options, and so did we. My brother Billy and I would tune some life into it every now and then. Flickering silhouettes from foreign game shows would take shape in the grey fuzz. There’d be the odd stray mammary gland, Stone Cold Steve Austin crushing beers and even Football Italia. But on Sunday September 26, 1999, after lamping the side of the TV with a series of calculated slaps, we tuned into the Holy Grail, and we didn’t even have to pay for it.

In ’99, Team Europe were trouncing the Yanks on U.S. soil, four-points to the good ahead of the Singles in their bid to make it three gold cups in a row.

“I’m a big believer in faith,” said U.S. Captain Ben Crenshaw on the eve of the singles, pointing his finger defiantly. “I’ve got a good feeling about this.”

“So are we,” I winked to Billy, kissing Mary on the top of her chipped skull for finding us the channel.

I wasn’t so smug when the TV turned red. Not satellite interference. Rather an American revolution led by corporals Sutton, Love, Duval and Woods, turning the tide in U.S. favour. The Americans clinched the first six matches before a back and forth across our scrambled 14-inch transmitter showed the score was 12-14, the home side ahead.

The trophy could still be retained, hope rekindled when Colin Montgomerie edged out the only likeable American, Payne Stewart, leaving Jose Maria Olazábal to duel it out with Justin Leonard in the final match.

I thought I knew what hate felt like when Cantona made the net ripple against my beloved Liverpool. Then Leonard stole my youth with a 50-footer on 17. It wasn’t just the fact he holed it that hurt, but the stampede that followed; the stupid yanks in their poxy sale-rack shirts and horse-like teeth, trampling their hooves across the green.

Teammates, caddies, wives, girlfriends, photographers and what appeared to be George Washington himself (the TV was a little blurry) bludgeoned the putting surface amid the frenzy – a putting surface where a stone-faced Olazábal stood, waiting to putt for the half.

I turned to my parents, their faces ashen, stunned by my extended vocabulary. Mam blocking the Virgin’s ears and Billy blushing, knowing full well I’d learned it all sitting next to him watching The Sopranos on RTE.

When the circus eventually left town, inevitably, Olazábal missed. Sure the whole of super-sized America had just stood on his line.

Europe lost. Crenshaw’s fate was rewarded, and I was grounded for a week for knowing more about the Waste Management business than I should. But it wasn’t all a waste of time, far from it.

They say you learn more in defeat than you do in victory, and when it came to the Battle of Brookline, I definitely did. I now hated the Americans. Thankfully, over time, they also say you mature. 23-years later and again, I have. I don’t hate Americans. I just love to hate them, for without them, the Ryder Cup just wouldn’t be the same.

In many ways it never has been since that box television went in the skip. For what it’s worth, Mary much prefers her Sky subscription. Without it, she wouldn’t get to watch this week’s U.S. Open at Brookline where my first golfing memory won’t be far from my thoughts as I hope for a better Sunday outcome.