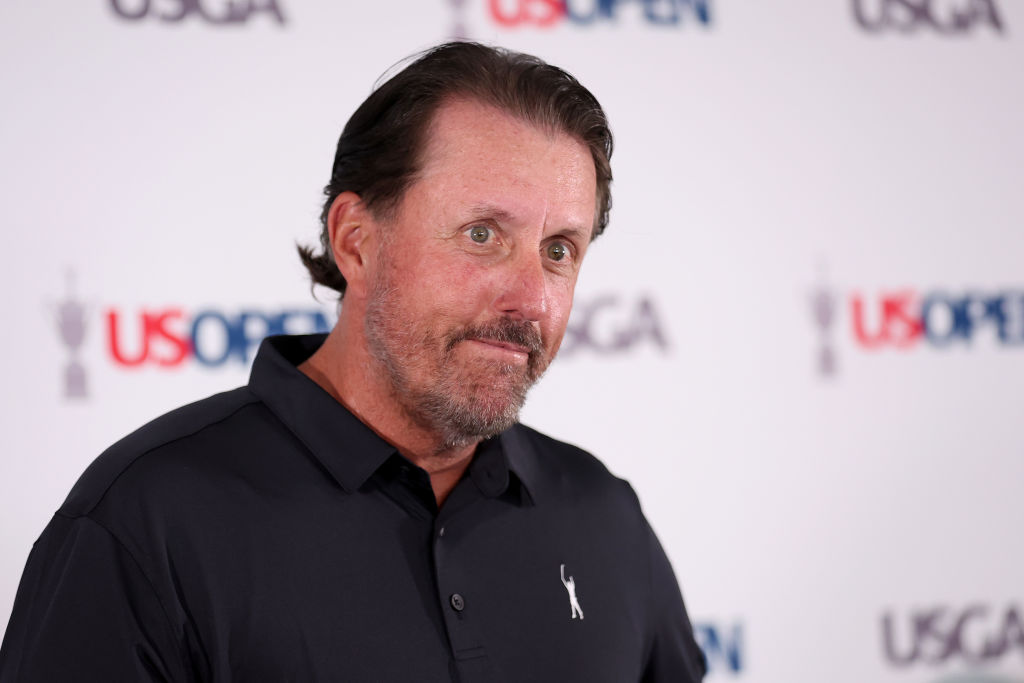 Phil Mickelson speaks to the media during a press conference prior to the 2022 U.S. Open at The Country Club (Photo by Warren Little/Getty Images)

It took little time for Phil Mickelson to be put under the spotlight, being the first player this week to face the US Open media ahead of Thursday’s opening round at Brookline.

It was Mickelson’s first press conference Stateside since February when he chose to not tee-up on the PGA Tour following his highly controversial PGA Tour and Saudi related remarks.

This week also marks a first as Mickelson and many others that competed last week in the inaugural LIV Tour event outside London, will contest an event where it would be on the PGA money list standings.  However, as we know, Mickelson and his fellow LIV Golf colleagues have been suspended by the PGA Tour from competition.

For the 25-minutes of his press conference, Mickelson very much stuck to the script as he had done last week at the Centurion Club and practically throughout the four months since last competing on US soil.

He began with a statement saying how good it was to be back competing in the US after ‘four months of necessary time away, and having the opportunity for me to step away a little bit and put a little bit of thought and reflection in going forward and how best prioritise things”.

Mickelson admitted there are people who have ‘strong thoughts and opinions’ about his decision to go with LIV Golf and he understands and respects that.

He ended his opening statement speaking of his delight in having yet another opportunity to win the one major that ‘has eluded me for my whole golfing life’.

It was a third question to Mickelson that struck a chord with USA with TODAY’s Christine Brennan questioning him on a New York Post report on the letter of condemnation he has received from a group of 9/11 families and survivors. Brennan noted that the 9/11 families accused Mickelson of being a “partner” to the Saudis, “and you appear to be pleased in your business with them.”

The six-time major winner, contesting a 30th US Open since his debut in 1990 as a then amateur, was quizzed if he was worried about risking his enormous fan popularity, something that he’s built up over 30 years.

“In regards to if fans would leave or what not, I respect and I understand their opinions,” he said, still sporting the facial hair we saw last week in London.

“I understand that they have strong feelings and strong emotions regarding this choice, and I respect that.”

I guess also in a surprise, Mickelson indicated that while he is currently among 15 PGA Tour suspended and/or who have resigned, the 51-year-old has not ruled out playing the PGA Tour again. He said that it should be his decision.

“I’ve worked hard to give back to the PGA Tour and the game of golf throughout my 30-plus years of professional golf, and I’ve earned that lifetime membership, so I believe that it should be my choice.

The golfer affectionately known as ‘Lefty’ was then quizzed if he felt he needed to apologise for being part of the Saudi-backed circuit.

Other opinions he had about the tour or any other governing body he said he would keep private “because it was one of the biggest mistakes I’ve made is voicing all of these little things”.

If there was one question that stumped Mickelson it was at the very end of his conference when asked if he could accept that he may never play on the PGA Tour ever again.  Mickelson paused for a good few seconds, no doubt to consider his answer, and responded saying how appreciated he is to have been competing on the PGA Tour, the friendships he’s made and was hopeful he will get to compete again.

Mickelson will begin his 2022 US Open campaign alongside fellow Open Champions Shane Lowry and Louis Oosthuizen.