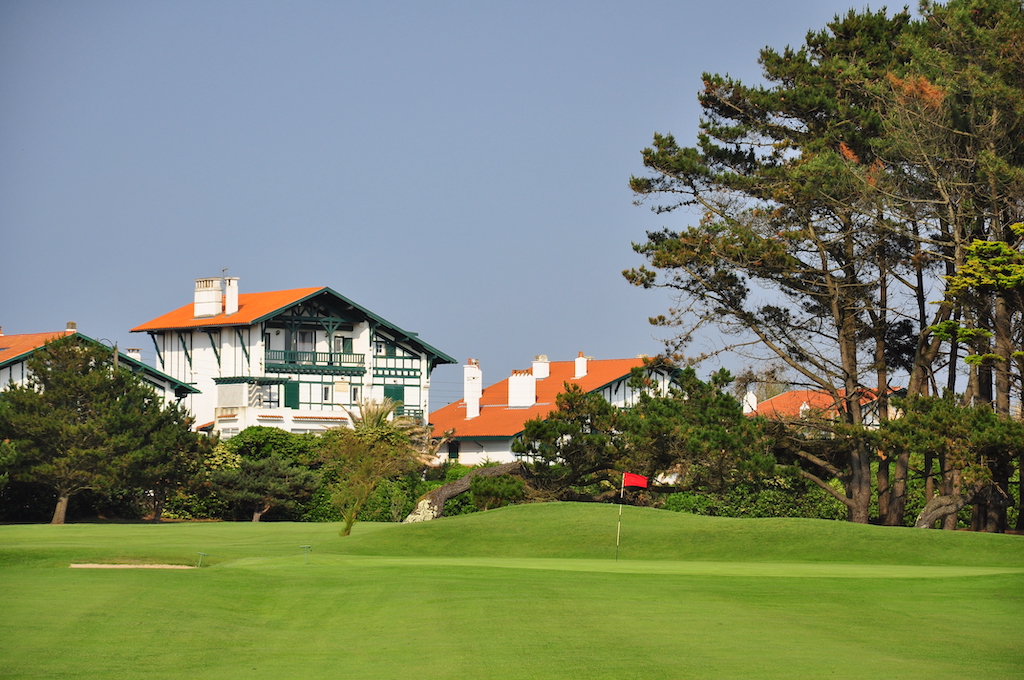 Following the Napoleonic campaigns in the early nineteenth century, remnants of Wellington’s militia (the majority of them Scots) remained in southwest France, where the comfortable micro-climate and relaxed lifestyle suited them.

For leisure, these exiles played an informal rough golf until eventually building the first golf course on the continent of Europe at Pau in 1856. At first, golf in Pau and elsewhere was largely confined to ‘Brits’ but gradually the natives took to the game too with many of them, over the years, becoming exceptional professional players. 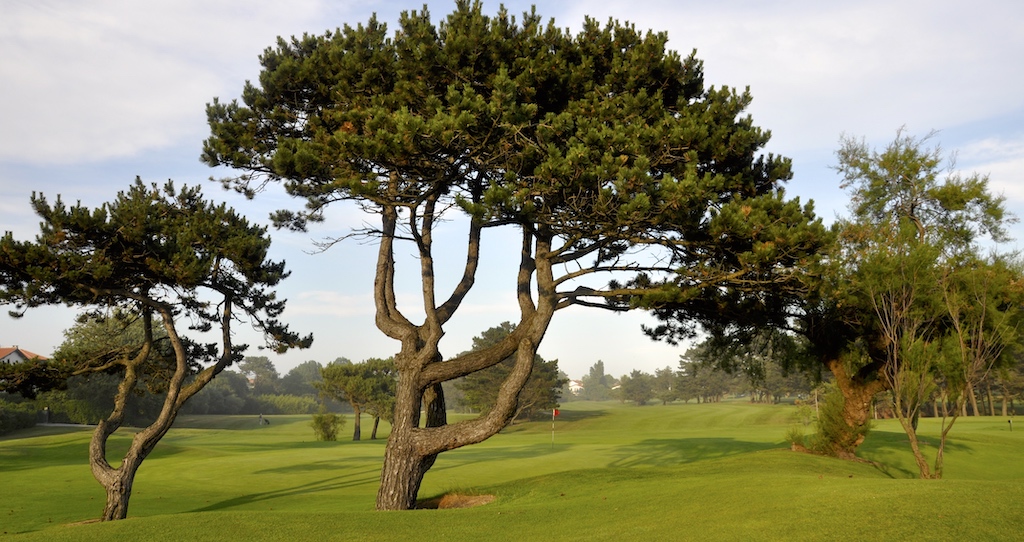 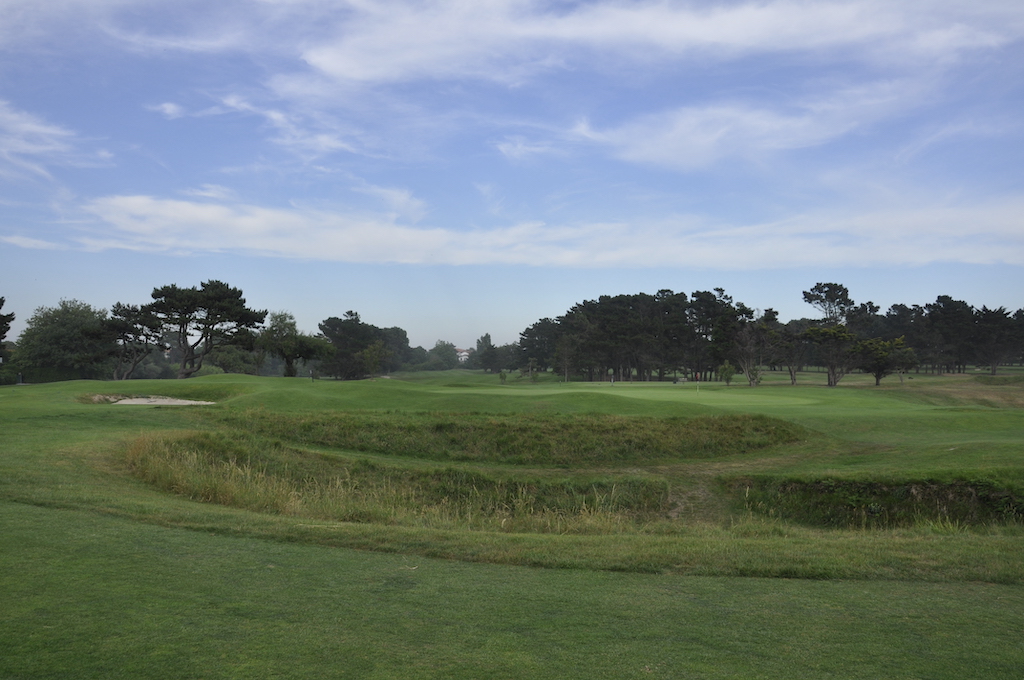 This punishing chasm pops up on many holes on the back nine – Image from Roland Machenaud’s book: “Pays Basque, Land of Golf”

It is claimed that 50% of the golf professionals in France are from the Southwest. I’m unable to verify that statistic but suffice to say Basques took to the game as if it were part of their nature and have been to the forefront of French golf from its earliest days.

The Biarritz area spawned many such exponents: the renowned Jean Garaïalade as well as the US Women’s Open Champion, Catherine Lacoste (the last amateur to win any major), Jean Van de Velde and Arnaud Massy who went one better than the infamous but much-loved Van de Velde by winning The Open Championship at Hoylake in 1907 as a right-hander. You’d be inclined to say: so what? – until learning Massy had played in the previous Open left-handed and finished joint-10th.

My most recent 3-day golfing trip (of several, over the past twenty years) concentrated on two, longtime favourite courses both within a ten minutes drive of our hotel (Mercure-Plaza overlooking the wonderful beach) right in the centre of a Biarritz that throbs with a lively atmosphere.

By no means a two-trick golf destination, Biarritz has other splendid courses that I have played previously and would love to play again: Chantaco, La Nivelle, Arcangues, Makila, Ilbarritz (a magnificent, municipal 9-holes course and training facility), Souraide, Fontabarrie, Zarauz and Ulzama with Pau, Hossegor, Seignosse and Moliets nearby.

Golf de Biarritz-le-Phare is located on Avenue Edith Cavell in a prestigious neighbourhood of red-roofed homes and splendid views of the ocean. That the members have maintained this little piece of heaven in such close proximity to the city is testimony to their dedication.

Built in 1888 by Tom and Willie Dunn, the course is one of the most famous in France. Englishman Harry S. Colt was asked to make some modifications in 1920 that turned the course into a visual treat that is an absolute delight to play.

As soon as you pass through the entrance gate you know you are in a special place where world class course conditioning is as important as the incorporation of every natural feature of the largely flat topography that includes a potentially card-wrecking, chasm in the middle of the back nine?

With a modest length of 5371 metres, every inch of the property had to be utilised with heavily, tree-lined fairways, punishing bunkering and camouflage trickery disguising distances as its defence. Colt’s philosophy of avoiding standardised sizes, shapes, and distances could not be better illustrated than at Golf de Biarritz le Phare.

Tom Simpson specialised in designing courses on the European Continent even if he was also instrumental in creating Ballybunion as it is today. An independently wealthy, eccentric, Englishman who enjoyed the luxury of being able to turn an interesting hobby into a career, Simpson was selected in 1927 to design a hugely interesting routing beside the Atlantic, 10kms north of Biarritz that features wildly undulating fairways going in every direction of the compass as they burst through a claustrophobic forest into wide open spaces beside a 7kms long beach.

There are no dunes but plenty of links-style hazards, deadly bunkering, and tight lies terrain especially on holes 2-7 and 11-14. There are five particularly strong par-3s ranging from 130 to 206-metres in length, whereas deep, fairway troughs in front of the par-5s mean laying back is more profitable than a failed attempt to get home in two blows. 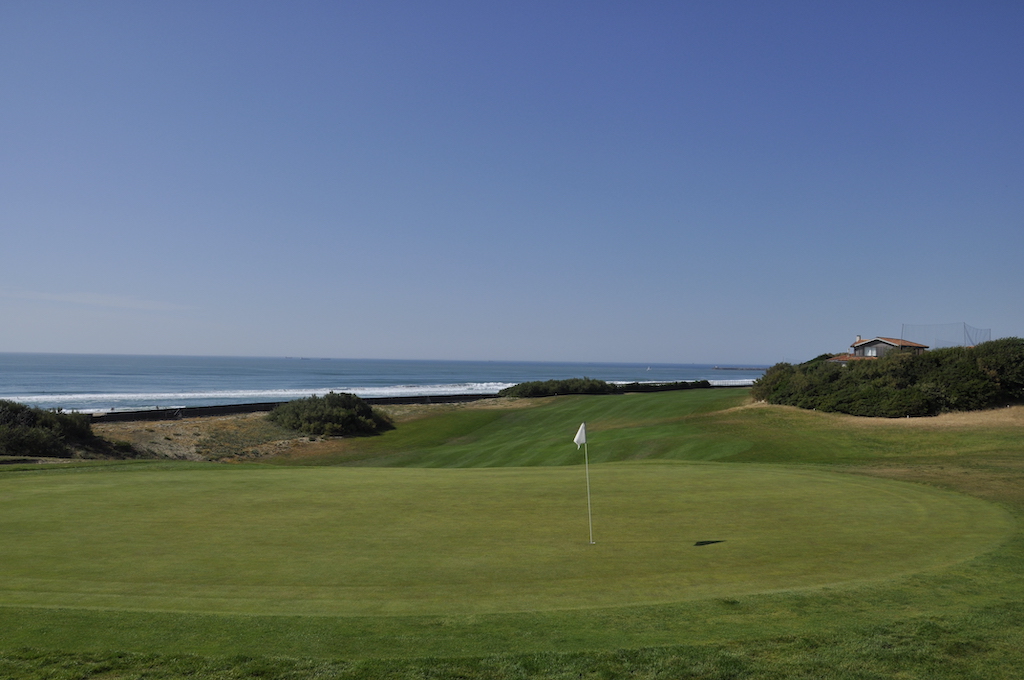 Current golf architect, Tom Mackenzie says: “Simpson is an unsung hero of the golden era of golf architecture. His name deserves to be mentioned alongside Harry Colt and Alister Mackenzie. That he isn’t is due to his personality and how he was perceived personally more than a fair judgment on his body of work.”

Chiberta is a busy place with a large, enthusiastic, and active local membership. A casual tee time is a luxury that can only be secured by booking well ahead of your visit. You may play the Chiberta course virtually by logging into the club’s website (www.golfchiberta.com) and watching a drone flyover. As is usual on a flat screen the undulations are softened but be prepared for a roller-coaster ride.