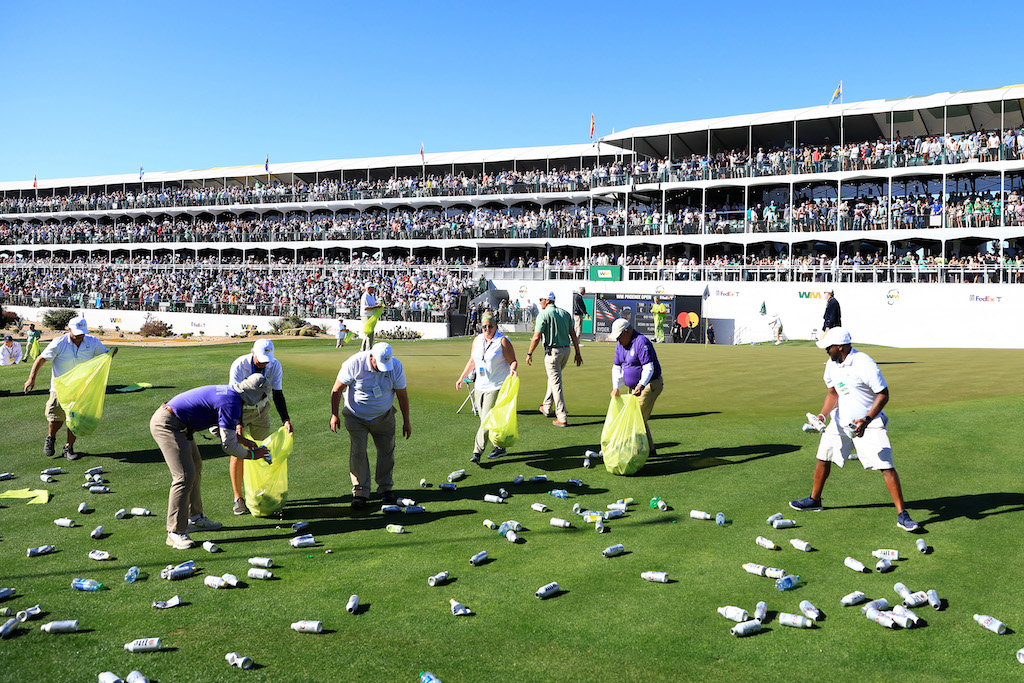 We can all relax as the PGA Tour’s worst tournament is over for another year.

It seems only appropriate that Waste Management should sponsor the Phoenix Open given not only the amount of waste generated by so-called golf fans but also the number of ‘wasted’ individuals who attend TPC Scottsdale over the four days.

Real golf fans were long ago discouraged from attending the Phoenix Open by drunken behaviour. There’s not a golf tournament on the planet where so many inebriated individuals are encouraged to gather in one place and hurl not abuse, but full cans and bottles of beer or whatever liquids they can get their drunken paws on than at the Phoenix Open.

And it’s not just those who drink so much that can hardly stand but there are the brazen, in full view goings-on between drunken men and just as drunk women, and you don’t need a cold beer poured over your head to be awake to know what I’m talking about.

The sight of around a dozen local Phoenix police officers conducting voluntary breathalyser testing each day as individuals leave the course speaks volumes for all the wrong reasons given the water hazards’ full of drinking that goes on at the Waste Management Phoenix Open.

At a guess, of the 200,000 pouring through the gates with each round there are 199,000 who are poured back out the gates at day’s end so full of turps their collective breath could be turned into fuel that would hurl a rocket to the moon and back.

Of course, police are conducting breath-testing to stop people from getting behind the wheel of motor vehicles. Though it’s a very sad sight indeed and a waste of Phoenix Police resources, and it’s also a sad reflection of the path this historic tournament has now taken, and here excuse my French, a tournament that is now just one almighty piss-up.

Is this what we want to see in golf? Of course not, and it just gets worse.

The sight of so many drunken individuals has to be unsettling to those golf-loving parents looking to take small children to what used to be a family-orientated and respectable golf tournament.

In recent years we’ve seen full beer cans and just as full bottles of beer raining down from every row, and every nook and cranny on the 16th hole when there is a hole-in-one. It takes a team of volunteers 15-minutes or more to clean up the mess, and all the time delaying a resumption of play. As well, beer bottles being thrown onto the greens leave indentations on the putting surfaces affecting the line of any future putts from those yet to putt out or those waiting in the groups behind.

What’s it going to take to bring a halt to this nonsense before a player, a caddie, or any official will have their head split wide open by a flying full bottle of beer, or what else is served up to these desperate for attention individuals?

Sadly, it will take the sight of ‘claret’ gushing from the head of one of the Tour’s top golfers before the PGA Tour will act, and if they act, at all.

When will the Tour set an example to stop this nonsense that is becoming a blight on the ancient club-and-ball game? Next thing you know, the trend will move to the NRL, Nascar, or who knows where this ‘must drink as many cans of beer as I can’ culture continues in major American sports.