How Hoffman & Theegala helped the fans find their voice 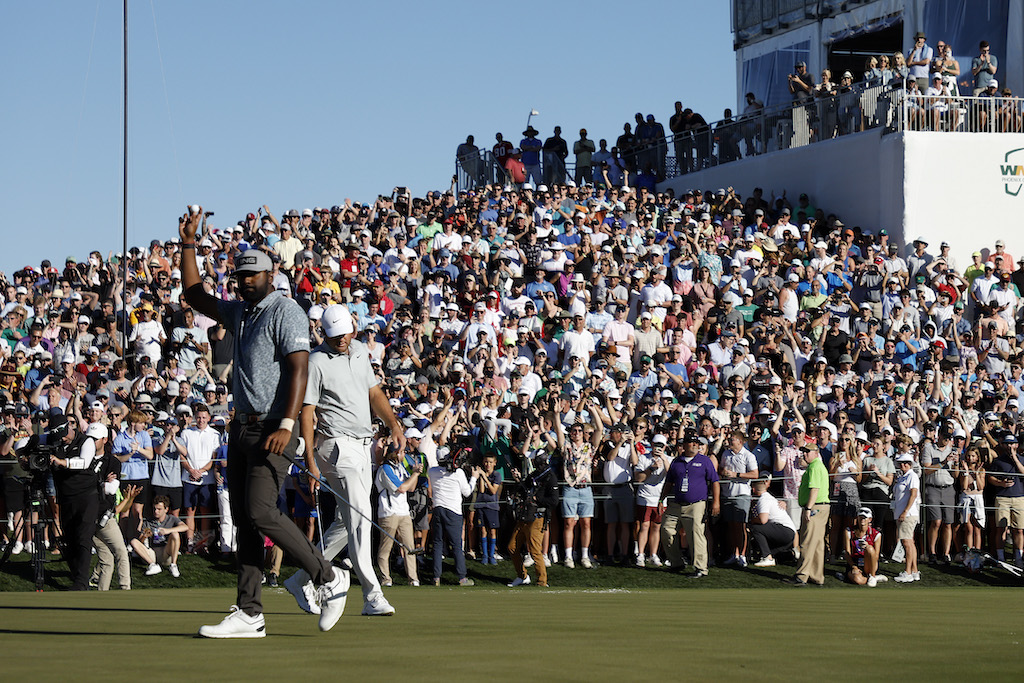 I hoped for a lot from the WM Phoenix Open but last week exceeded all expectations. From playoff drama to hole-in-one madness, beer showers for half-naked dad bods to a kid running over a spectator in a getaway golf cart, TPC Scottsdale had everything.

The course played firm and fast. The cream rose to the top because of it, while funnily enough, propping up the 67 players who made it through to the weekend was Charley Hoffman, plum last by two strokes at nine-over par, perhaps still reeling from a social media outburst gone wrong on Friday night; the 45-year old uniting the golf world against him after voicing his displeasure at the PGA Tour for facilitating his own incompetence.

If you missed it, Hoffman, a Waste Management Brand Ambassador, the same brand that generously title sponsored last week’s tournament, attempted to drag the Tour through the desert dirt and the tournament down with it after a ruling went against him in round two. He was penalised twice, once when he found the water hazard from the par-5 13th tee, and again when his ball, which he placed precariously by the hazard, decided one dip wasn’t enough for the day given the desert heat.

The ball was deemed in play. Hoffman pinged another stroke. And though admittedly the rule is silly, it’s still a rule someone of Hoffman’s experience should know. Then again, you’d think a man somewhat in the limelight would also know not to resort to social media when the red mist descends. Frantic fingers typing thoughts undigested should rest on those words until morning, laugh at the overreaction and delete accordingly. Not Hoffman.

In a tirade which demanded more protection from the Tour whilst tagging the gentle hands of Saudi Golf in an apparent come-get-me plea – met with empathy from brothers in arms, Mickelson and DeChambeau, and them alone, of course – unwittingly, Charley had hassled The Hoff. His cover blown. The common dude with flowing blonde locks nothing but an entitled prima donna.

I woke up on Saturday morning to read all about Hoffman trying his best to hold the tour to ransom as if he wasn’t one of the most replaceable guys on the roster. Sad thing is, I reckon he woke up a few hours later realising much the same – to hell with you, or to Saudi, the general theme of a rather hostile response that reverberated far beyond the confines of Hoffman’s Instagram account.

But from the rubble of another reputation in ruin, a hero has emerged. If the fans found their voice in condemnation of Hoffman, then they used their vocal cords for good by backing Sahith Theegala, the halfway leader in Phoenix.

The 24-year old admitted to being star-struck grouped alongside Koepka and Schauffele on moving day but he could’ve fooled me, a breath of fresh air as he bounced around like a Duracell bunny, feeding off the crowd and even playing to them in a style all of his own.

Such is golf, if it wasn’t for a bounce of a ball on 17 on Sunday, we could’ve been talking about a different first time Tour winner. Instead, we’re talking about the birth of another probable PGA Tour star. Not a messiah by any means, but more proof, if it was needed, that for every Charley Hoffman, there’s a hundred others biding their time for that one opportunity. That one week to change it all.

For anyone who’s been reading my columns of late, you would know that I haven’t exactly enjoyed silly season this year. Too often the story has strayed from the fairway. Super Leagues, Saudi, sickening wealth. A chasm between those at the top table and those fighting for scraps, and a complete disconnect between players and fans that for one week at least, Sahith Theegala mercifully bridged.

Here’s a guy still living with his parents, his dad his number one hype-man amongst the crowd. Wearing his heart on his sleeve, grinding with raw game. Two hundred thousand people chanting his name. THEE-GA-LA, THEE-GA-LA. His pupils dilated, high on life.

And it’s instantly relatable. The beauty of sport. The fairy-tale we all fell in love with. The story of the little-known underdog capturing the hearts and minds of the people, the same people who’ve been taken for a complete ride by Super League rumours as if their opinion on the matter makes no difference to whether the idea lives or dies.

When it came to football’s Super League equivalent, it was the fans who ultimately rejected the proposal. Golfers might preach about being independent contractors but it’s not talent alone that provides them with the life they live. Like football, fans have a part to play in deciding golf’s fate, and through their support of Theegala, and their damnation of Hoffman, the people have found their voice.

Walk the plank with the Shark at your peril.