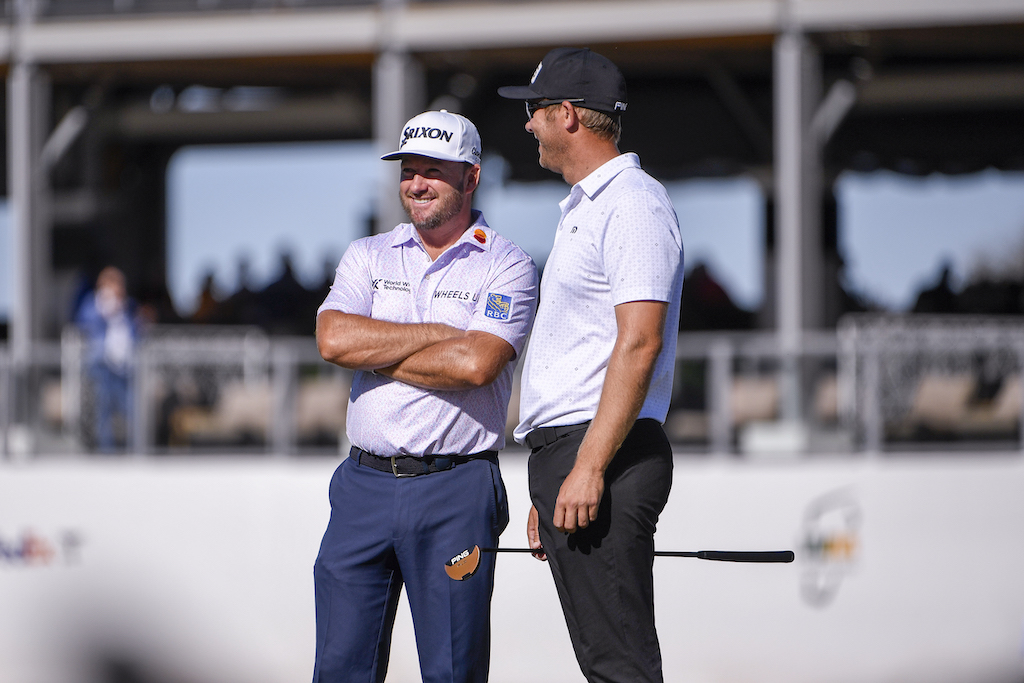 Unsurprisingly, Graeme McDowell labelled his outrageous birdie on the 17th hole at TPC Scottsdale in the first round of the Waste Management Phoenix Open as probably ‘the most ridiculous’ of his life.

After driving into one of the fairway bunkers on the par-four and then putting the ball in the middle of the green with his approach, a long way away from the back pin position, the Northern Irishman proceeded to roll in a monster 88-footer and accompanied it with a sheepish shrug to the cameras.

It capped off the perfect way to play the stadium holes at TPC Scottsdale for the former US Open champion, who rolled in an 11-footer for birdie at the famous par-three 16th prior to his incredible birdie on his way to an opening three-under 68 in Arizona.

“That might be the most ridiculous three I ever made in my life,” laughed McDowell, who is four shots off leader Sahith Theegala in his first appearance at the Phoenix Open since 2006.

“I drove it in the right hand fairway bunker and, I mean, that putt is just greased lightning, it’s a marble staircase down there.

“From my angle I could barely see, I thought it was going to stay short, I really did. And I would have probably paid you about a thousand bucks for a four out of that right bunker after my tee shot.

“And to birdie 16 and 17, 16 my first time playing it in the kind of stadium like that was fun and I look forward to getting back out tomorrow.”

It was a very positive opening round for McDowell, who has made the cut at just one of his last six events and has dropped to 358th in the world knowing that with his exemption running out at the end of this year he needs to perform to retain his Tour card for next season.

But this was an improved performance as the 42-year-old missed just two greens in regulation, none of which came on his back nine, and his approach shots were, for the most part, on the money.

Indeed, his round could have been even better. McDowell missed three birdie putts inside 16-feet in his opening six holes before he had his superb stretch on the stadium holes, rounded off when his snaking putt on the 17th that cambered left, then right and finally slowly tricked down the slope and eventually into the hole.

His only dropped shot would come one hole later at the 18th after his one truly errant approach shot of the day was pulled well left of the green and, although he managed to get it back on the green from among the spectators, he failed to hole the par putt.

That didn’t set him back, though, and he responded well with a fantastic approach to five-feet from 191 yards on the first for a bounceback birdie, and another arrived when he found the par-five third green in two and safely two-putted from 21-feet.

Unfortunately that was as good as it got as McDowell, although he could have had birdies on the sixth and ninth when he had good looks from 14-feet and nine-feet respectively, but he couldn’t convert, however given his recent form, he will most certainly take it.

“For me it’s just day by day at the minute. I’m just really trying to layer good days on good days,” conceded the Rathmore man.

“It’s been a really tough 18 months and I’m really just trying to keep things simple, just work hard, have good days, hopefully those will add up to being in contention and I’ll give myself some chances to win.

“That’s really just the goal at the minute is just to try and be as patient as I can.”

McDowell also cracked a smile when asked what he thought of the tournament, famous for its stadium atmosphere around the 16th green, and he admitted he wasn’t sure why it’s been this long since he played at the Waste Management.

“It’s a fantastic week. I mean, obviously watching it on TV, heard the guys talking about it, this is a quite the show here, quite the party and quite the atmosphere,” he said.

“We played early this morning, so I got to see 16 fairly benign. We’ll play it tomorrow afternoon a little later on when I’m sure there will be a few beverages starting to flow and the atmosphere should be a lot of fun.

“But the golf course is sensational, not sure I’ve seen a better conditioned golf course than this one and it’s playing firm and fast which kind of suits my fast a little bit. Greens are fantastic and it’s been one of those weeks where I’m trying to wonder why it’s been 16 years since I’ve been here.”

Meanwhile, Seamus Power had a tough day with the putter that saw him finish with a level-par 71 that featured just one birdie and one bogey on back-to-back holes but could have been considerably better on the greens.

The World No.46 missed birdie putts inside six-feet on each of his first three holes – the 10th, 11th and 12th – and that set the tone for the rest of the day as two more chances from 12-feet came and went at each of the 15th, 16th and 1st.

Power finally got under-par when he rolled in an 18-footer at the par-four sixth for birdie, but the putter problems returned just one hole later when he three-putted from 30-feet for bogey on the par-three seventh, and missing a 10-footer that would have led to a closing birdie was a galling end to a tough day.

At the top, Theegala leads by one from K.H. Lee after playing his first 16 holes in seven-under before play was suspended due to darkness, the American carding seven birdies – including four in a row from 13 to 16 – in a bogey-free effort that he will finish on Friday morning.

Lee is the clubhouse leader after signing for a 65 that featuring an eagle, five birdies and a bogey in his opening round at TPC Scottsdale, with defending champion Brooks Koepka knocking in six birdies but also one bogey to lie third after a 66, a score matched by Adam Hadwin, Harry Higgs and Scott Stallings (17 holes).

Theegala burst out of the blocks in his round, making five birdies in his opening eight holes to sit one off the lead before play was suspended due to darkness.

Jon Rahm, Patrick Cantlay, Justin Thomas and Billy Horschel are among 11 players sitting at four-under in a packed leaderboard, with McDowell sharing 18th at three-under with the likes of Hideki Matsuyama, Adam Scott and Abraham Ancer.