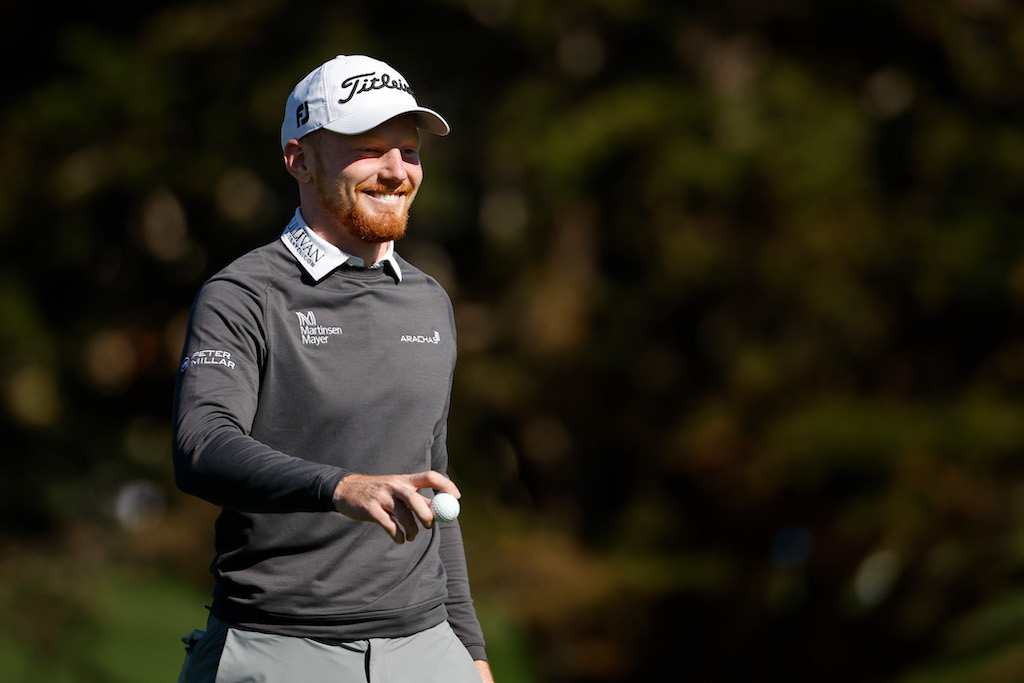 The plush life of a PGA Tour pro. The glitz, the glamour. The courtesy cars, the five star treatment. Your every want met.

John Murphy saw enough in one week at the Pebble Beach Pro-Am to leave convinced it was a life he could get used to, despite his own game falling short of expectation over three rounds in California dreaming.

I caught Murphy halfway through a four-hour plus drive from Cape Town to George, his caddie Shane O’Connell in the passenger seat and the pair coming towards the end of two days’ worth of travel, including two eleven hour flights from LA to Zurich, and from Zurich to South Africa, plus a hefty wait for a rental car.

The life of a Challenge Tour pro? Not quite so plush.

Still, en route to another Pro-Am, this one of the Dimension Data variety and for better or worse, missing Bill Murray, the pair were rightly in good spirits despite the draining journey, no doubt still buzzing from their first taste of PGA Tour action and a hopeful glimpse into a life yet to come.

“It’s pretty nice alright,” Murphy laughs thinking about it. “Everything’s put in front of you. You don’t have to stress about much. You land and there’s a rental car waiting for you. Your room is all sorted. You get to the golf course the next day and you’re fired out wherever you want to go. You come back in and there’s food waiting for you.

“It just seems like a very easy lifestyle to be honest and certainly a place I’d like to be in years to come.”

Murphy already has another date to look forward to at another AT&T sponsored event, this time the Byron Nelson, a start earned through his work on and off the golf course during his University days at Louisville, but far from satisfied with fleeting visits to the Promised Land of PGA Tour golf, Murphy is more eager than ever to get back to the grind to ensure his next stay is a more settled one.

“Ideally I want to get to the point where it’s not a luxury anymore,” Murphy says.

“They’re bonus events and a cool experience but I’d like to get to the point where I’m not looking forward to a PGA Tour event two months down the road. I’d like to be there a bit more often than that.”

If motivation was needed, playing in the company of the new world number 46, Seamus Power certainly provided it. A revelation this past 10 or so months, Power is one of the form players in the world and Murphy caught a first-hand exhibition for two rounds at Spyglass Hill and Pebble that left him under no illusions as to the standard he’s yet to reach.

“It was mad – he probably made me feel a bit worse about my own game being honest,” Murphy admits.

“He just made everything look so easy whereas it was my first tournament in three or four months. I was a little bit rusty but watching Seamus go about his work, I was just thinking the whole time, ‘I need to get better’.

“But it was enjoyable to watch at the same time. Of course you like to see someone like Seamus doing so well. It was great to spend time with him.”

Despite his enviable unwavering self-belief, last week was always going to be a big ask for the Kinsale man. Having tied up his Challenge Tour card back in October, all the off-season work and warm weather training in the world couldn’t have prepared him for a scorecard in his back pocket under the bright lights first time out on the PGA Tour.

“The first tournament of the year is always a bit edgy no matter where you are,” he says. “You haven’t played tournament golf in a while. It’s natural to feel a little bit different.

“And I’m not making excuses, but I was playing against lads on the PGA Tour who’ve been teeing it up every week for the past couple of months now.

“So yeah, it was a little edgier than I would’ve liked. It’s very easy to get into a rhythm when you’re in the middle of a season to get a bit of confidence going but I just didn’t have that.

“I feel like I was swinging it well. I thought I could trust my swing under pressure and I hit it really nice all three rounds, just maybe lacking a bit of confidence on the greens. I just have to get back into that scoring mindset but having the card back in the pocket is only going to improve my game.”

As will playing a multitude of different courses under tournament conditions, with Murphy exposed to three new ones in last week’s rotation, though one stood head and shoulders above the others.

“If I had to pick one golf course to play for the rest of my life, I think Pebble would be pretty close to the top of the leaderboard, along with St. Andrews,” he says.

“The history, the aura about the place. The course itself. Pictures can’t do a place like that justice. It exceeded all expectations.”

It also provided Murphy with an opportunity to speak with stars from stage and screen and although autograph hunting was the last thing on his mind, he had earmarked a couple of celebrities on the tee-sheet should the chance arise to meet.

“I really wanted to meet Macklemore before the week,” he says of the American rapper and songwriter.

With Murphy getting his wish to meet Macklemore, his right-hand-man O’Connell was courting famous faces of his own, not least Power’s caddie Simon Keelan and Rory McIlroy’s former bagman JP Fitzgerald, who was caddying for Dermot Desmond in the Pro-Am.

“I was amongst caddie royalty,” Shane laughs, a life-long friend of Murphy still learning the ropes of a life spent inside the ropes as a tour looper.

“It was really great to spend time with them, pick their brains, and they couldn’t have been more helpful. They encouraged me to ask questions. They reached out at every possible opportunity to help but to be fair, the caddie community as a whole is very good like that. Everyone I’ve met has offered a helping hand.

“There was another fella we met, Casey Kerr – he’s caddied in thirty straight Masters. He worked with Ernie Els and Vijay Singh and I sat next to him one night at dinner, and then had Simon and JP on the course.

“It was just special to surround yourself with people who’ve achieved great things from a caddie perspective. It’s the same for John on the golf course or anyone else starting out your career, you want to spend time with people who’ve been successful and you can learn from it and hopefully end up in their position one day.”

One player who’s enjoyed his fair share of success during a relatively short career is three-time Major winner Jordan Spieth but neither Murphy nor O’Connell would’ve swapped places with him on the cliff edge of the eighth fairway on Saturday afternoon.

I asked Shane what he’d do if John’s ball ended up in such a perilous place, not least because Spieth’s caddie Michael Greller said if he had his time again, he would’ve flung the ball into the ocean before Spieth had the chance to hit it.

“John was 15 or 20 yards short of it playing it on Friday and even that’s pretty daunting,” O’Connell says.

“If he was any closer to the cliff you’d be half kind of like, ‘be careful now’. Standing over the penalty line, you’d definitely have your heart in your mouth, trying your best for your player to go the other way.

“You wouldn’t want your first PGA Tour start to finish with you tumbling down onto Carmel Beach!”

Instead, it finished up with a one-over par round of 72 at Monterrey Peninsula, a one-over par three-round total and a lasting impression of what a life on the PGA Tour could turn out to be.

For now, it’s back to the grind and the Dimension Data Pro-Am on Thursday at Fancourt, followed by the Cape Town Open. Murphy shares an Air BnB this week with former British Masters champ Paul Dunne who knows a thing or two about the fast lane, and the hard shoulder of life on Tour.

On the drive from Cape Town to George for Murphy and O’Connell, all they could see out the front windscreen was open road and a horizon line glistening with opportunity.