Power upbeat after settling for another top-10 at Pebble 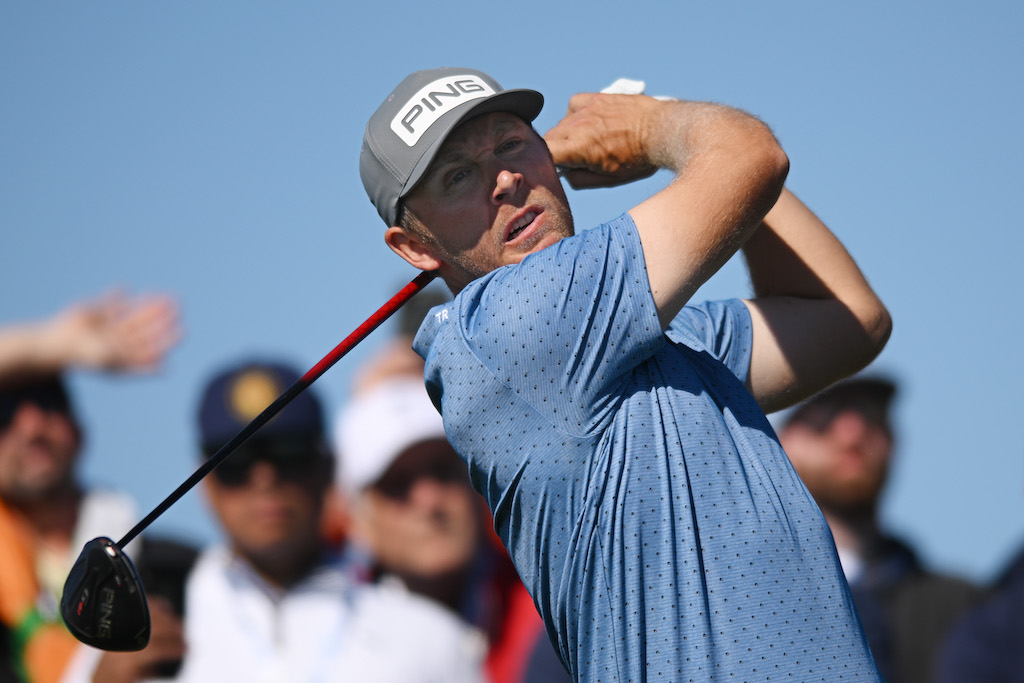 A disappointing weekend display cost Séamus Power his second PGA Tour victory at the AT&T Pebble Beach Pro-Am but there were still plenty of positives in completing a top-10 finish having set the 36-hole scoring record in California.

The West Waterford man was outstanding in his opening two rounds, backing up a 64 at Spyglass Hill on Thursday with the same score at Pebble Beach itself on Friday to race into an incredible five-shot lead at the halfway stage.

But the wheels fell off with a three-over 74 at Monterey Peninsula on Saturday, dropping Power two strokes off the lead going into the final day, and a level-par 72 at Pebble would only serve to drop him out of the running down the stretch, eventually finishing in a share for ninth at 13-under.

What will pain the 34-year-old even more is, given he was 16-under after two rounds, he only needed to play his final two rounds in a cumulative four-under to win the tournament, but instead he would finish six shots off eventual winner Tom Hoge who won by two shots from Jordan Spieth at 19-under.

There is a silver lining, with Power set for another jump up the world rankings that will greatly increase his odds of earning an invitation to the Masters in a couple of months’ time, while he also continues a run of form that has seen him finish outside the top-15 just once in his last eight events.

But this will be a bit of a blow to the confidence. As good as his victory at the Barbasol Championship was last July, this was an opportunity for him to register a win at a world-class venue while leading front the front. The way he’s playing, however, there’ll likely be many chances to put that right.

“It was fun and I really enjoyed it. I’ve never played Monterey well and it kind of got me on Saturday and kind of took my momentum away,” said Power.

“Overall, it was nice to pick up a couple of shots on the back (nine today). It was nice and it was fun to play Pebble when it was firm with a bit of breeze. It was a different challenge and very enjoyable.

“It’s weird to say after having a very good opening two rounds but I didn’t have my best game this week but I was able to manage it and my wedges and putting were good enough to keep me in it and that’s encouraging.”

Power’s AT&T effort has seen him jump four places to World No. 46 having peaked at No. 47 a fortnight ago but then dropping to No. 50.

The in-form Irish golfer heads from the stunning Pacific Ocean shoreline and east this week to the desert-like course at Phoenix for Thursday’s starting WM Phoenix Open at TPC Scottsdale.

It will be the first visit in three years after missing the cut in the 2019 event and also his only prior start in the event.

“I didn’t play Phoenix well the last time and I can’t remember the course that well,” he said.

It was all smiles for Tom Hoge in the end at Pebble Beach who had a superb finish to card a four-under 68 and reach 19-under, which was enough to earn him the two-stroke victory ahead of the surging Spieth and fellow overnight leader Hossler for his maiden PGA Tour success.

The 32-year-old birdied three of his final five holes to hold off the challenge of Spieth and a late push from Hossler – who recorded his best PGA Tour finish by finishing second – and he will move up to second in the FedEx Cup rankings with his win.

Their fellow overnight leader, Putnam, was the first to make a move when he birdied the first, but he became a non-factor as he made just one more birdie at the eighth and added bogeys at the sixth, 12th and 13th around it to fall well out of contention.

Instead it was down to his playing partners and Spieth to battle it out, and it looked like Hoge would be another to buckle when, after birdieing the fourth, he double-bogeyed the fifth after finding trouble around the green to drop back to 14-under, while Hossler similarly seemed to be cracking under the pressure with a bogey at the second and a double bogey on the par-three fifth.

Spieth reached 16-under after a birdie at the second, and two fantastic approaches at the fourth and seventh led to two more birdies – alongside a bogey at the third – which saw him hit the front at 17-under, but Hoge drew level with the three-time Major champion with birdies at the sixth and seventh, although he would then bogey the eighth.

Both players found birdies early on the back nine, Spieth piling the pressure on with dialled-in approaches at the 12th and 13th both gaining him shots, while Hoge then matched him after a delightful approach at the 11th and then a 17-footer at the par-five 14th.

In the end, the par-three 17th proved to be the decisive hole after a phenomenal approach from Hoge to nine inches on the 16th led to a kick-in birdie to tie the lead, setting up a grandstand finish.

Spieth was the first to play the treacherous par-three and when he failed to make the sand save from the bunker short of the green and took a bogey to fall one shot back, Hoge took full advantage. Stepping up in the group behind him, the champion safely found the putting surface with his tee shot and then, for good measure, drained the 21-footer for birdie to post the winning score.

Hossler gave himself a chance to spoil the party down the 18th after birdies at 10 and 11 got him back up the leaderboard and he then added a birdie on the 17th to leave himself needing an eagle on the 18th to force a play-off, but he pushed his approach shot into a bunker and when he failed to hole it, the title was Hoge’s.

“Feels pretty good. Almost a little in shock. It’s been so long since I won I almost forgot how to celebrate at the end there!” laughed Hoge.

“It was a weird day because I felt like I made too many mistakes early and I was out of it, but then I looked up at the leaderboard and I was right in the game making the turn. Luckily I made a few putts on the back nine.

“I’ve always got myself in position and then felt a little uncomfortable on Sundays. Finally I felt right the whole day, felt real calm and made the putts I needed to make down the stretch.

“It’s awesome. You work through so many hard times and to finally be here and pull one off, it feels incredible.”