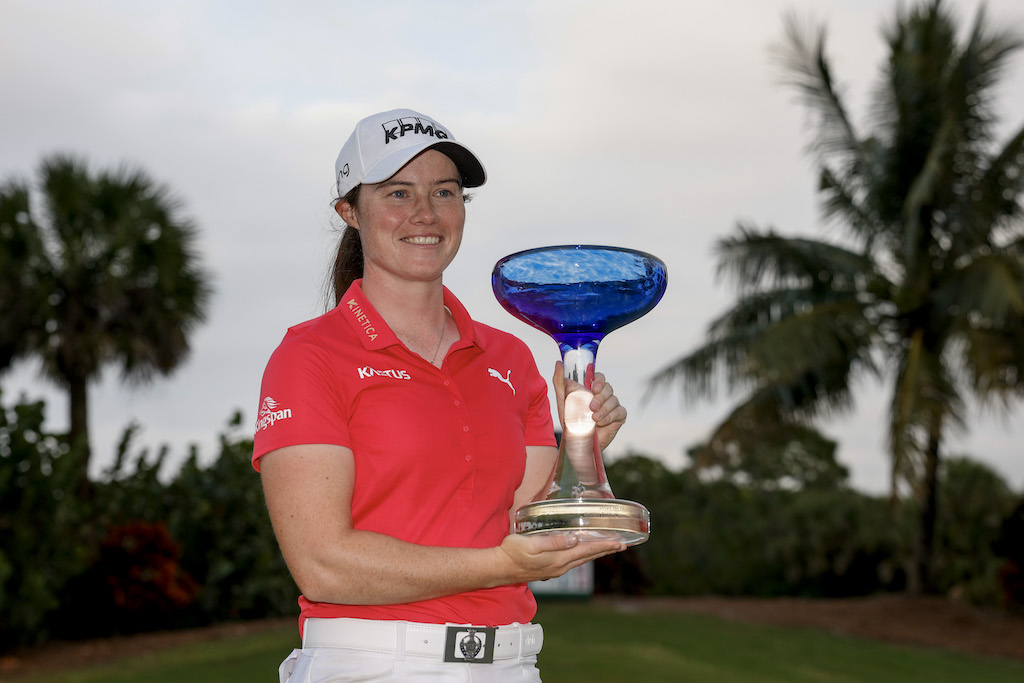 The last time Leona Maguire won a tournament, the town of Cavan pulled out all the stops by providing her a gold BMW convertible to ride in when she came home.

That was for a team win as part of last year’s successful European Solheim Cup side. Goodness knows what they’re going to do for her maiden individual win at the LPGA Drive On Championship when she returns home next week.

“I don’t think the weather in Ireland is quite right for riding around in a convertible as it was in September,” joked the Slieve Russell ace.

What she does know is that this week will last in her memory for a long time. An historic victory in Fort Myers in Florida, Maguire became the first Irishwoman to win on the LPGA Tour when she closed out the LPGA Drive On Championship by a comfortable three-stroke margin over Lexi Thompson.

This was no ‘hold on for dear life and hope nobody overtook her’ win. This was comfortable for the majority, overcoming a slow start and challenges from Thompson, Marina Alex and Brittany Altomare to card a five-under 67 that allowed her to walk down the final hole with a four-shot lead.

The relief when she holed the final putt to seal the win was palpable. Last season she finished runner-up twice and it seemed like nothing she could do would get her over the line. This season it’s taken her two events to make history and walk away with a $225,000 prize.

Expected to jump close to, if not into, the top-20 in the world rankings, Maguire is a far cry from the young Cavan girl who left Duke as a college star and made her way up through the Symetra Tour onto the top tier.

“I feel like the way I’ve gone about it, I’ve been prepared at each level and mastered each level,” explained Maguire.

“I know people probably thought I was going to win before this. I was maybe getting a little impatient last year, but I think going down the stretch at Meijer last year with Nelly (Korda), that was a huge confidence boost for me. Knowing that she was three shots ahead and I nearly closed the gap, but really felt like I held my own that week.

“And then the 61 at Evian too, and the Solheim Cup was a massive confidence booster. The Solheim Cup is one thing. To do it in an individual event when it’s just you out there by yourself, it’s a different ballgame.

“It hasn’t been easy. A lot goes on behind the scenes that people maybe don’t realize. It’s been a long journey. Yes, I’ve done a lot of great things. I won a lot in college and amateur golf. But there are no guarantees.

“I put in a lot of hard work over this off-season. Felt like my game was close but was just missing something. You just need things to click together, sort of hole those right putts at the right time, hit the right shots.

Her performance on Saturday was exemplary, playing aggressively and looking to score rather than being defensive and hoping others around her fell away. Two bogeys suggest she was maybe a little too offensive but, on the flipside, seven birdies in her final round was her reward before the trophy was handed over.

“Today was a big opportunity and I wanted to make the most of that. I didn’t want to have any regrets,” she added.

“At the same time, it’s hard to win. The LPGA is probably as strong as it’s ever been. You have to put some really solid rounds together. Felt like I had been putting three rounds together last year and there was always one round that was a little bit iffy.

“That was the game plan today, was to go out on the attack, not to be defensive, not to try and protect the lead. Go out and try and win it, and not just by one, try and get myself over the line by a few.”

The significance was not lost on her either. The only Irishwoman to win on Tour. She’s a trail-blazer. A game changer. A pioneer for women’s golf back home. The hope is that young girls up and down the country will look at her and want to be her in the future.

She held off a Major champion and two LPGA Tour winners to close it out, too, and to do it so comfortably will make it all the sweeter. There are no asterisks on this – nobody handed it to her and there was no luck involved, she made history fully on her own merit.

Back in the Maguire household there will be a double celebration on Sunday, and no doubt it will continue for a week or so until Leona can return to join the party in person.

“It’s my mum’s birthday tomorrow, so I guess this is a pretty good present for her. I’m not going to be home for it, but yeah, hopefully she’ll get to celebrate this next week when I’m home. That’ll be special,” Maguire smiles.

“It’s incredible to be the first Irish person (to win) and to show that it is possible for a girl from a small little town in Ireland to be able to compete against the best players in the world and win on the LPGA.

“It’s always an honour to represent Ireland no matter where you go. To see people excited about women’s golf and Irish golf is fantastic. Hopefully Seamus (Power) can do the double tomorrow.”

As she mentions, the hard work has been done behind the scenes and will continue. The aim is for this to be the first but not the last and, after her sensational Sunday run at last year’s Evian Championship, being involved at the business end of a Major is now a goal.

That frustration from last year is driving her on. She feels she should have won last season, and perhaps the only disappointment about this win is that it is her first rather than her second or third – not that she’ll be complaining for too long, though.

“Last year was a great season but there was no win, so it almost felt like it had an asterisk,” she admits.

“I knew I wasn’t far away. I’ve always kept my circle small, and that’s been it from day one. Mom, dad, Shane (O’Grady, coach), (sister) Lisa, my physio, nutritionists, the staff at the Institute of Sport back home. Just relying on the people that I trust I think has been massive.

“Sticking to my guns knowing that what I was doing was working. Just needed a little bit more time. I’m obviously delighted for people to be able to enjoy the win today but, at the same time, I’m the one hitting the shots and putting in the long hours. I’m the one that’s there at the range until dark, up first thing. Nobody sees that grind that goes behind it.

“Ultimately, today I didn’t really care about the outcome. It was as long as I knew I gave it my best shot it was ultimately nothing I could do. Hopefully it was this week. If not, down the line again.”

As for the celebrations?

“I’m sure something will have to get put in the trophy at some point tonight.”