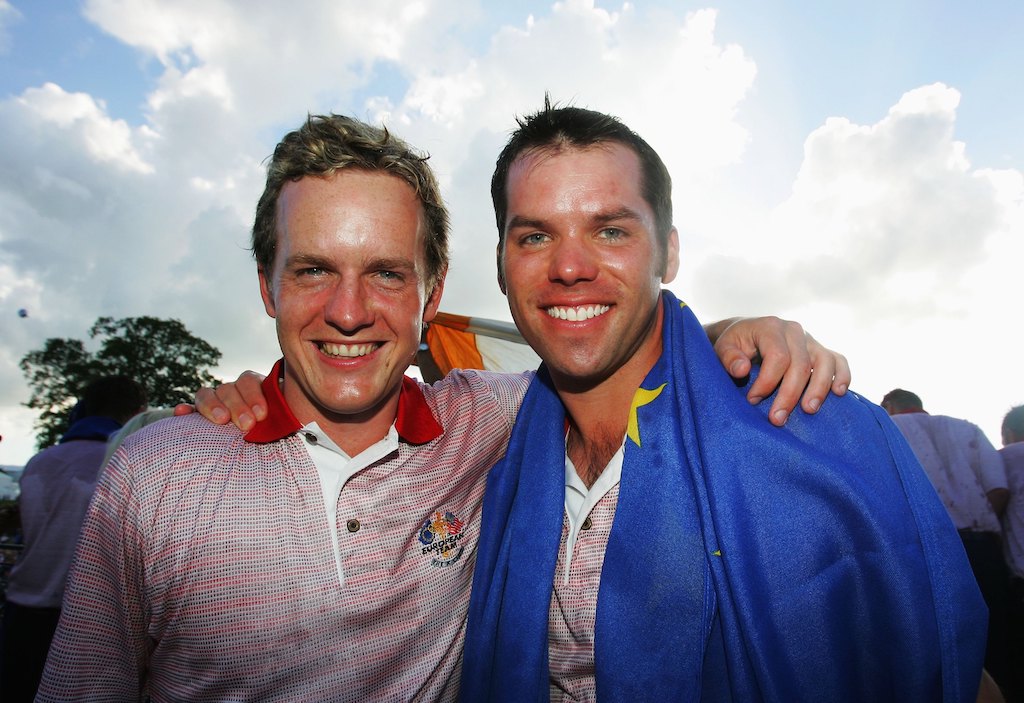 Luke Donald and Paul Casey at the 2006 Ryder Cup at The K Club on September 24, 2006 (Photo by Warren Little/Getty Images)

Donald continues to firm as favourite to take over the European leadership from Ireland’s Padraig Harrington despite the announcement of a new captain now a little behind the normal pre-Christmas appointment news.

Casey joins the likes of Harrington, Henrik Stenson and Justin Rose each pinning their choice as Donald. And with Lee Westwood ruling himself out, the former World No. 1 ranked Donald seems the obvious choice

Casey, now aged 44, has known Donald since they were in their mid-teens playing amateur competitions together.  The pair were paired for both foursomes matches in the victorious 1999 GB&I Walker Cup team at Nairn in northern Scotland. In turning pro, they found themselves teaming to bring England victory in the 2004 World Cup of Golf in Seville. They would then make their Ryder Cup debut in the same 2004 winning European Team under Bernhard Langer’s captaincy.

“Luke would be a fabulous European captain and what I have witnessed from him in his role as a vice-captain and in the backroom support staff has been phenomenal,” said Casey ahead of this week’s Slync.io Dubai Desert Classic.

“Luke’s playing career is second to none and you don’t have a playing career like that without the attention to detail. He’s just very skilled both on and off the course.

“Obviously, I’ve got a great team’s event history with Luke as we’ve won a World Cup as partners and we were partners at the ’99 Walker Cup at Nairn.

“There are some other candidates for Rome who I also think will be fantastic, including Henrik (Stenson) and others. I am not putting all my eggs in one basket in terms of the ’23 captaincy as it could be either a Westy (Westwood), if it’s Hendrik or it’s a Luke as they each are great candidates. So don’t get me to choose (smiling)”.

“Luke certainly has got the skills and there’s no question about that.”

Donald played in four European Ryder Cup teams and all winning sides – 2004, 2006, 2010, and 2012. He’s also been a vice-captain twice under Thomas Bjorn in 2014 in Versailles and then under Harrington late last year.

Casey was asked by Irish Golfer Magazine what it was about Donald as an individual he liked. And in answering the question, he singled out Harrington for special praise.

“Luke’s consistent. I think that is the key, isn’t it? There is an awful lot of pressure being the captain on either side,” said Casey.

“If I look at Harrington, I have to compliment Padraig. I thought Padraig is maybe the best captain I’ve played for. The result doesn’t show that which is, unfortunately, going to go down in history. What was so telling was the caddies bought him a watch. How many times would the caddies buy a captain a watch? (laughing).

“Padraig gets back to my connection with Luke as Padraig is very consistent and that is why I describe Luke as consistent. He doesn’t do emotional roller-coasters. He’s just a wonderful person and would be a great European Team captain.”

Casey himself is a veteran of five Ryder Cups since also making his debut in Bernhard Langer’s 2004 victorious team and naturally has a strong appreciation of the role of vice-captain.

And having witnessed the first-hand work of Donald as part of the ‘backroom staff’ it’s another reason why he’s backing Donald to be handed the captaincy reins.

“There is a lot that goes on that players actually don’t know about (laughing), so I would not know where to start in terms of actually what went on with Padraig (Harrington) or Thomas (Bjorn) and other captains I have played under, but Luke does.”

And there was one last question to Casey and that was to ask how much he would enjoy being a member of Donald’s 12-man team?

“Of course, I would. I am 44 and I would be 46 when we get to Rome but you never say never. So, I don’t know if it will be my last one. If Rome were to be my last one, I think that would be amazing. I thought Paris would be my last Ryder Cup but here we are having played Whistling Straits last year.

“And speaking of Whistling Straits …. It was nothing about the loss but more about not having the fans there and to me, it was not like prior Ryder Cups I played in the States.

“I think Rome could be amazing.  I don’t know the golf course but I almost like to go out on a high but only if I’m world-class at that time but saying that, there are so many world-class European players and then I look at –  help remind me who was at Whistling Straits? – Hovland was a rock star.  He was a rookie but he wasn’t a rookie kind of thing.

Shane Lowry and also, what a star. WIESBERGER! (In a louder tone) Wiesberger was so good that week. He wasn’t scared. He stood on that first tee with confidence, with calmness and I just thought he played brilliantly.

“I don’t think I am the only but sometimes when you play Ryder Cups .. being a top player, you hope that next generation is going to fill your shoes and I look at that group assembled last year at Whistling Straits and I feel they were so much better than I was.

“I went to last year’s Ryder Cup with great confidence and left with great excitement about the future of the Ryder Cup in Europe given the talent that is coming through. I’m now excited (laughing) I can still make the Rome side next year so it would be a wonderful thing if I were to be in Luke’s team but only if I am good enough.”