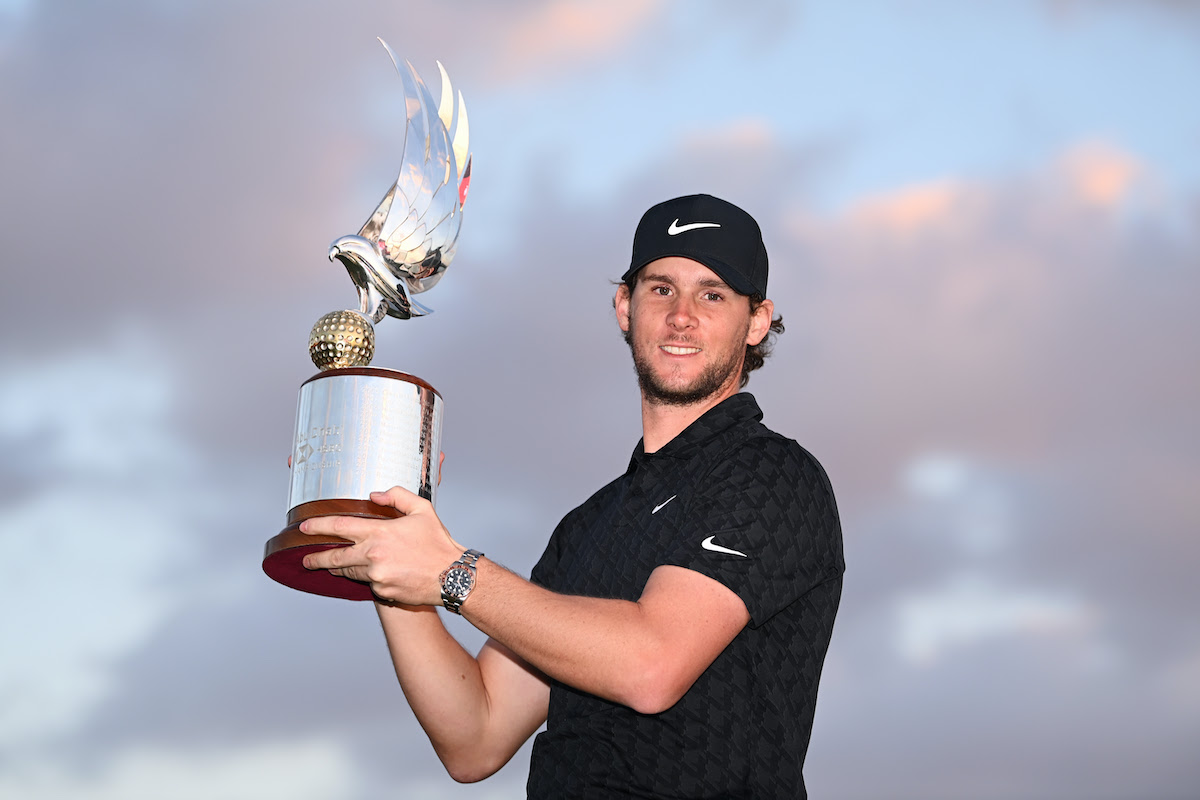 Thomas Pieters became the first Belgian to win a Rolex Series event after outlasting a star-studded field with a superb display of poise and composure to claim the Abu Dhabi HSBC Championship title.

In the opening Rolex Series tournament of the DP World Tour era, the former Ryder Cup player was calmness personified while the others fell away in the challenging breezy conditions at Yas Links.

A birdie at the eighth hole moved him three shots clear but Viktor Hovland, Rory McIlroy, Ian Poulter, Rafa Cabrera Bello and Shubhankar Sharma were among the many stars to move in and back out of contention at various points during a thrilling final day.

Pieters dropped just a single shot thereafter, at the par five 11th, and signed for a level par 72 and a ten under total, leaving the 30-year-old one clear of India’s Sharma and Spaniard Cabrera Bello and earning him a sixth victory on the Tour.

“I’m happy I can finally get Adam a gold bib (for Rolex Series winners),” said Pieters. “We’ve been talking about this for years. It’s fantastic. I was well in control of my ball all day and putting maybe wasn’t there but early on I felt really confident.

“When you’re in control of your ball flight and the golf ball, it’s fun. You know, you can be creative and that’s how I felt out there today.”

That elevated him to the top of the 2022 DP World Tour Rankings and moved him firmly back into the top 50 of the Official World Golf Ranking for the first time since April 2018.

“I just hope all the juniors back home are watching this,” he added. “I used to watch as a kid and think it’s impossible for me but then when Nico (Colsaerts) came on the scene and started winning, it’s stuff like that that inspires kids, and hopefully I can do that back home.

“I feel like I’ve turned the corner and playing really good golf. Like I said, I’m really in control of my ball flight and it’s nice to feel like that and make putts as well. My putting has improved massively and I felt like that’s the thing that really kept me going on the weekend.”

It proved a day to forget for Shane Lowry who, having started the day just one shot off the lead at minus-10, opened with a disastrous triple bogey 7 having found the first fairway. Lowry airmailed the green long-left before failing to make the green with his third and three-putting from 35 feet.

Another 7, this time a double-bogey on the par-5 seventh put paid to his victory chances and from there Lowry would’ve gladly let the desert swallow him whole with a misbehaving flat-stick much to blame for a week that might’ve been for the Clara star.

“Wasn’t good enough today unfortunately,” Lowry tweeted after signing for a five over final round 77 to slump to a share of 12th at five-under.

“Thanks to all the Irish that came out to support and for all your support back home. Sorry I couldn’t deliver.”

Wasn’t good enough today unfortunately….. thanks to all the Irish that came out today to support and for all your support back home. Sorry I couldn’t deliver. Congrats to @Thomas_Pieters on your win. On to Dubai for me. #onwardsandupwards ☘️🇮🇪

Lowry will head for the Dubai Desert Classic along with Rory McIlroy who finished alongside his Tokyo Olympics teammate after a closing three-under 69.

Padraig Harrington completed the Irish scoring, signing off with a 72 to finish one shot back of his compatriots at four-under after a double-bogey at his final hole.