Finding a way through the demoralising frustration of playing bad golf 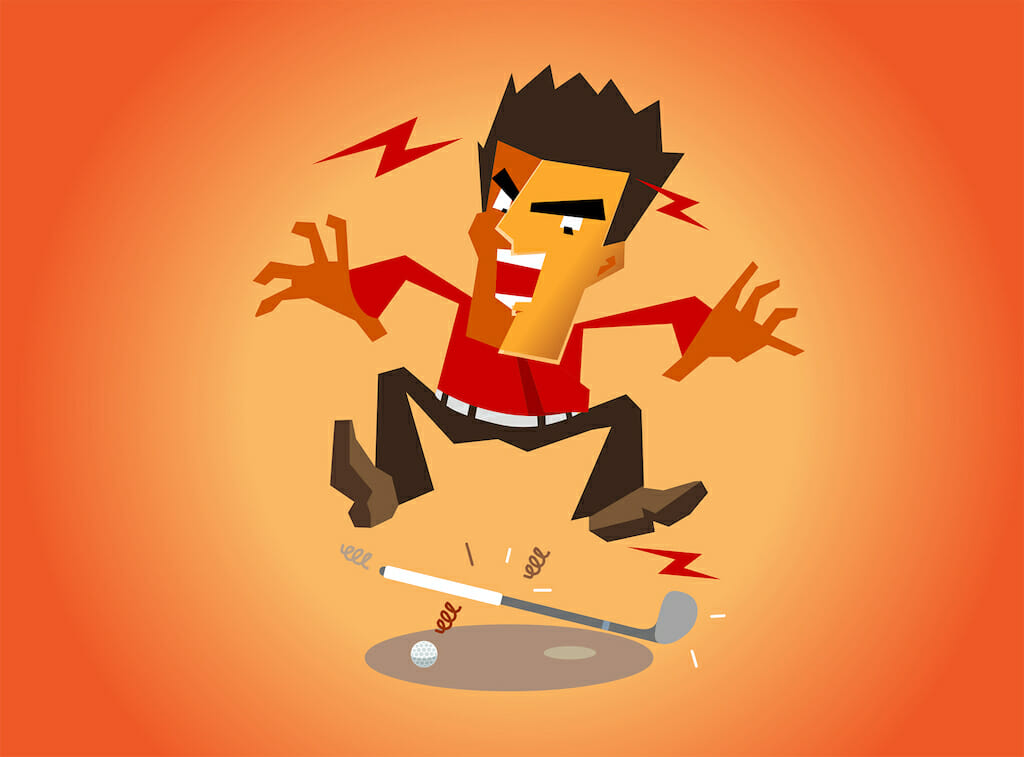 The Golfer’s Mind…..after about five holes of playing rubbish….. again! Lost in a fog of confusion, frustration, self-criticism. Desperately seeking a way of swinging the club that can actually hit the ball in the required direction. At the very least, let it be findable.

Very important this because every lost ball is like a dagger in the heart, especially when they’re brand new and are gone forever with one banana slice or pull hook into the boondocks. And if you ask this golfer if he or she is OK, you might get the answer: “I’m fine.”

On the sixth tee, the decision is made. Give it up. Completely. No more of this torture.

“How quickly can I get out of here and on to eBay to sell everything I own that even vaguely relates to golf?”

It takes a hole or two or even four or five later and the tension is gone out of the body. And that’s when ‘The Shot’ happens. The drive or fairway wood or iron shot that pings off the middle of the clubface just about perfectly. You know what happens next. The gloom lifts, maybe not totally, but the outlook is definitely brighter.  Something has changed and it’s for the better.

From that tiny instant of re-connection with the ‘real’ golfer that is within all of us, there’s a fair chance of ending the round in a better mood and with a renewed hope for the future. eBay? Forget it. Sure why would you give up this great game?

Ah, lads. How often have I been and still am, that golfer.

The game, however, has not yet brought me to the point of destroying a golf club, as I witnessed years ago when a frustrated playing partner swung his driver in anger having dumped yet another ball O.B. He was convulsed with rage in that moment and the head of the driver hammered into an iron sticking out of his golf bag. Farewell to a couple of hundred quid as the head of the driver flew off the shaft. Not a pretty sight. I also, so far, have not got so mad over a round of golf that I ended one with a ripped-up golf shirt.

Of course, it’s possible Rory McIlroy got into a cage fight with a sabre-toothed tiger in the scorer’s hut at the recent DP World Tour Championship, but more likely he did some self-inflicted damage to his shirt. If that’s what the game can do to professionals, maybe we bottom-feeding hackers at the lowest end of the golfing food chain should cut ourselves some slack.

The common denominator among golfers at any level is that we are all human, and this game can drive us nuts – if we let it. Hence the growth in golf psychology. And what a growth. Type in the words “articles on golf psychology” to a search engine and within 0.63 seconds 12,600,000 results are on offer.

Quite amazing. There was a time 30 or 40 years ago, when a club golfer would be nervous about admitting to having a lesson from a golf pro, in case he or she would be accused of ‘taking the game too seriously’ by their regular playing partners.

Golf psychology? Forget it. Professionals, never mind amateurs, by and large shunned the notion that the mind game was important.
And then came Dr Bob Rotella, who could be hailed as a breakthrough guru for the mind game. Before he co-wrote his best-selling series of books with journalist and author Bob Cullen, Rotella ran a sports psychology course at the University of Virginia, working mainly with their basketball team.

In the late Seventies, as described by author Brett Cyrgalis in his fascinating book “Golf’s Holy War – the battle for the soul of a game in an age of science” a pivotal event took place that prised open the door for Rotella. He had been invited to speak to the advisory board of a leading golf magazine and this was a formidable group: Sam Snead, Dr Cary Middlecoff, Paul Runyan, Bob Toski, Jim Flick, Davis Love, and Peter Kostis. It was a daunting task and prior to the event, Rotella was warned about Snead.

The Doc spoke for about 90 minutes and at the end Snead stood up. What would he say? And then came the verdict:
“Boy, I’d hate to think how many US Opens I would’ve won if I had you to talk to when I was coming up.”

Cyrgalis wrote: “Everyone cracked up, and Snead’s verdict was the turning point of Rotella’s career. If Snead had derided the idea of mental coaches, as so many were expecting, the rest of the room would probably have followed suit.

“From there, sports psychology in golf would likely have been delayed for years, if not indefinitely. The stigma of weakness attached to needing a psychologist of any sort would have stuck around a little longer, and the careers – and lives – of so many ultra- talented golfers would have gone unfulfilled.”

Snead never did win a US Open, and told Rotella and the group how he messed up in 1937 at Oakland Hills, losing what he later considered was his best chance to win the title.

That was a lifelong regret for Snead but his endorsement of Rotella all those years ago helped pave the way for Dr Bob to have a role in the Major title wins of Pádraig Harrington and Darren Clarke. And for that, we should tip our cap to ‘Slammin’ Sam’.