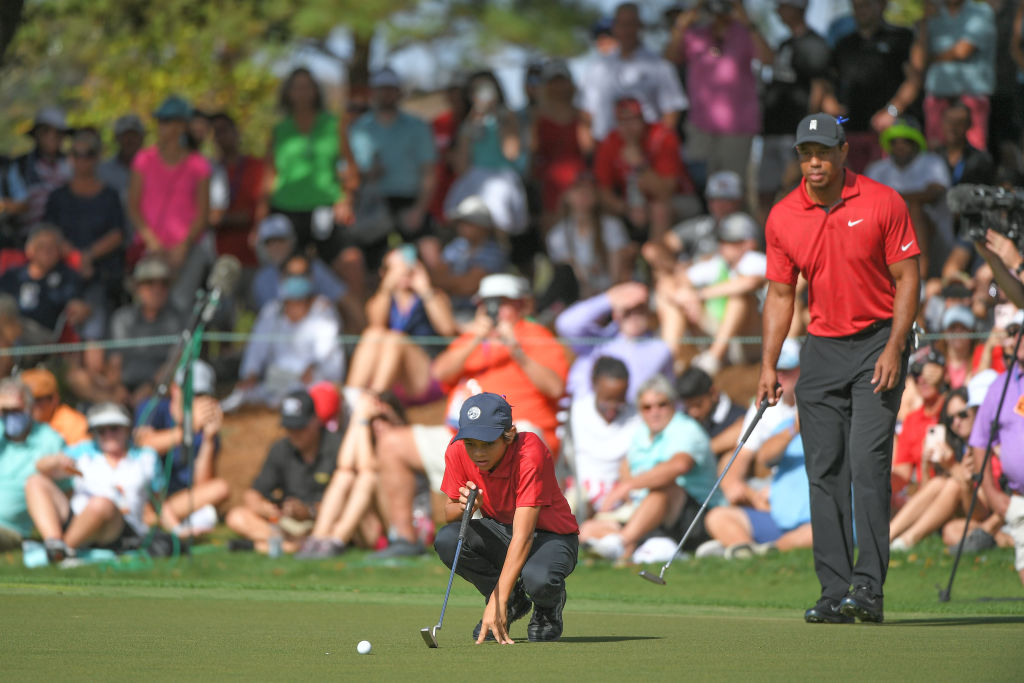 Charlie Woods reads the putt on the ninth green during the final round of the PGA TOUR Champions PNC Championship at Ritz-Carlton Golf Club on December 19, 2021 in Orlando, Florida. (Photo by Ben Jared/PGA TOUR via Getty Images)

No matter what word you select, the sight of Tiger Woods being in contention for victory in his first tournament since the events of last February was truly mind-blowing.

There were the doubters who questioned whether Woods would be risking too much in teeing-up despite PNC Championship organizers allowing the use of motorised carts.

But those who have followed Woods’ career closely know you can never doubt anything Woods does inside the competition ropes.

Who would have thought he and his 12-year-old son Charlie would be coming down the last in Orlando having combined for eleven straight birdies and a chance of victory on the host Ritz Carlton course.

In the end, Team Woods came up two shots shy of forcing a play-off, signing off for a stunning 15-under par 57, five shots better than last year’s final round, and finished runners-up just shy of Team Daly with the double major-winning John Daly and his son, John Daly.

The Daly’s matched Team Woods’ 57 that included a third hole eagle ‘3’ along with 13 birdies and won the championship victory belt thanks to Saturday’s open score of 60 compared to the Woods’ who posted a 62.

Woods was once again thrilled to have taken part and again, so proud of his son.

“We had a little run going there from the seventh”, said Woods. “It was nice. It was fun. When we played the turn, I told Charlie, I said we’re going to have to at least birdie out for at least eight out of the nine on the back nine to have a chance. There were just too many groups that were either tied with us or ahead of us.

“We got on a nice heater, and as you said, we made 11 in a row, and on the last hole, we probably — we knew on the tee box that we needed three to probably get into a playoff or at least make it interesting for the Dalys’ back there. Unfortunately, we didn’t chip-in and we didn’t make the putts, either.

“But it was fun. The goals this week, two things: One, to have fun; and two, no bogeys, and we accomplished both”.

It was fun too for all those fortunate spectators and the no doubt record-breaking TV audience with Team  Woods again dressed in identical red shirts, black caps and black trousers as they had done a year ago.  We warmed to seeing Woods gel with his only son.  We loved Charlie and though only a year older, he has cleared jumped ahead in leaps-and-bounds with a golf club in his hands.

Then over the last few holes we saw all the mannerisms, all the expressions and the intensity we’ve seen throughout Woods’ career when he’s in contention late on a Sunday.

“You know, there’s two different moments. You know, because obviously when I had my back fusion, I didn’t know if I could ever be out here again and do it. This was a totally different deal. This was whether or not I would have a prosthetic or not, and I don’t”, said Woods.

“So I’m very lucky and very thankful to all of the surgeons and the nurses that have helped me along the line and all my physios. They have pushed me and they have worked on me, and even on my hard, dog days, to get my butt in the gym sometimes, and there are some days I don’t want to do it, just to keep pushing me and to keep going. And then there are days when they have to put the reins on me because I want to go and I get the competitive juices going, just like do I on the golf course and I want to hit certain shots.

“Charlie was out there telling me a couple times yesterday and today, ‘Don’t hit that shot, you know what that does.’

“I said, “Just worry about your own game and the banter back-and-forth, that’s what I miss this entire year, I miss being out there with him and going out to Medalist and playing golf and doing all those things. Now that I’ll have this opportunity going forward again, I’m just so thankful.”

Clearly, Woods still has much work to do both on his game and also his body before he returns to the PGA Tour.  His next appearance will surely be as host of next February’s Genesis Invitational and the tournament near Santa Monica ending on February 20th, 2022 three days shy of a year since the near-fatal events a short distance away on a suburban L.A road.

Woods will also be sure to be present at April’s Masters having missed this year’s former champions dinner, so the ‘hit-and-giggle’ of these past two days is now for the record books and it’s back to the practice range, the gym, the physio and others who have helped get Woods to where he is now before Woods is ready to be introduced on the first tee of a PGA Tour event.

What we saw and what we again realised over this past weekend is that you can never doubt a true champion.  Woods is a champion’s champion and he’s again shown that at the PNC Championship.

Team Harrington picked-up five places in sharing 15th place thanks to a second round 10-under par 62 for a 15-under par total.  Padraig Harrington and son Paddy highlighted day two with a fifth hole eagle ‘3’ and eight birdies.