He’s back! Tiger to play at next week’s PNC Championship 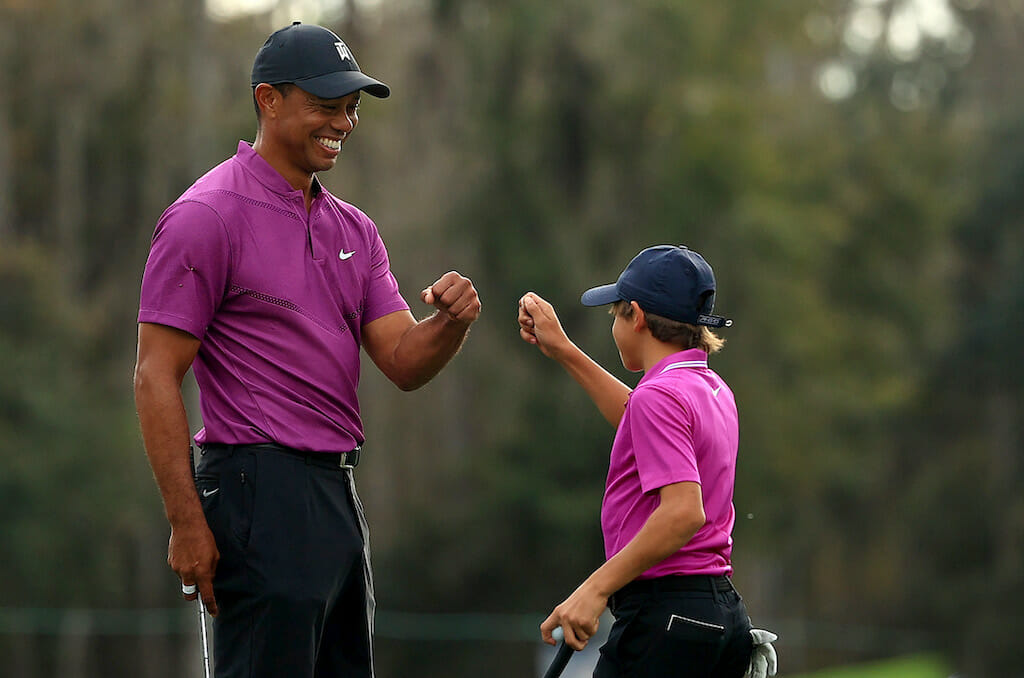 Just as Irish Golfer Mag predicted two days ago, Tiger Woods has confirmed he will return to competitive golf next week at the 2021 PNC Championship, taking place at the Ritz-Carlton Golf Club Orlando, Grande Lakes, Dec.16-19.

Woods will partner with his son Charlie as they return to the PNC Championship for a second time. Woods’ last competitive showing before his horrific car smash was at the same Orlando event a year ago when father-and-son gelled superbly on the final day posting a ‘better ball ’round of 62 to grab a share of seventh place.

In confirming his attendance next week, Woods said: “Although it’s been a long and challenging year, I am very excited to close it out by competing in the PNC Championship with my son Charlie.

“I’m playing as a Dad and couldn’t be more excited and proud.”

Woods posted news of his return to competition on his Twitter account with some of the first oF already hundreds of messages being from those who administer the game.

Although it’s been a long and challenging year, I am very excited to close it out by competing in the @PNCchampionship with my son Charlie. I’m playing as a Dad and couldn’t be more excited and proud.

USGA said: “Welcome back! Can’t wait to see you and Charlie play”.

And within just an hour of Woods’ own tweet, there had been 49.5 thousand ‘likes’ .

IMG’s Alastair Johnston, the executive chairman of the tournament added, “I am delighted to confirm that Tiger and Charlie Woods will be participating in the 2021 PNC Championship. We have been liaising with Tiger and his team for some time and are delighted that he has now decided to make his return to competitive golf at the PNC Championship.”

The 20-player final field for the 2021 PNC Championship is:

The tournament, which will be broadcast live on NBC, attracts major champions whose victories this year span from 1959 to 2021, and last year, saw a field gather that had won a remarkable 67 Major titles. With only 20 teams in the field, players past and present have shown unprecedented interest in campaigning for a spot in the star-studded line-up.

Since the inaugural tournament in 1995, when 10 major winners gathered with their sons, the PNC Championship has continued to evolve and develop. It now features 20 major champions and their relatives competing for the total purse of $1,085,000 in a two-day, 36-hole scramble for the Willie Park Trophy. The 2020 edition was won by Justin Thomas and his father, Mike.

The PNC Financial Services Group, Inc. has been the title sponsor of the tournament since 2012.  The event formerly known as the PNC Father/Son Challenge, was renamed the PNC Championship in 2020 to reflect the high level of competition and field composition, while still celebrating an inclusive family event that showcases the special bonds that the love of golf creates.

To qualify for the PNC Championship, players must have won a major championship or The Players Championship. Their partner must not hold a PGA TOUR card.

The PNC Championship is operated in partnership by IMG and NBC Sports.