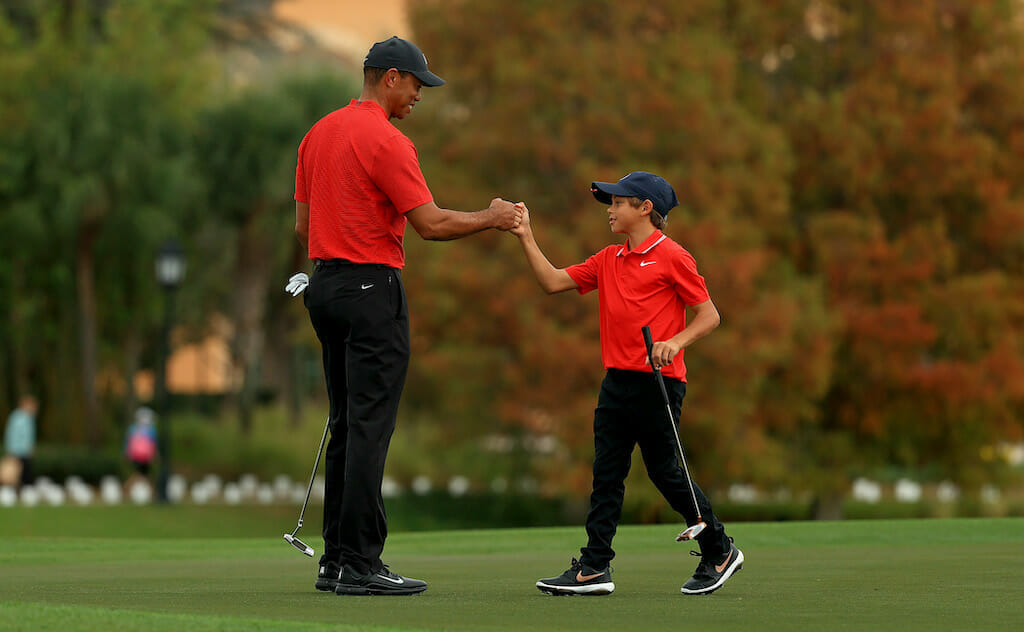 Organisers of next week’s PNC Championship are keeping a spot open for Tiger Woods and son, Charlie in the hope they may choose to tee-up in the Orlando event.

Woods looked impressive when spotted at the far end of the range three times during last week’s Hero World Challenge in the Bahamas.

Twelve months ago, Woods and his now 12-year-old son made their debut in the 20-team event won last year by Justin Thomas and his father with organisers already confirming 19 teams.

It was thought when Retief Goosen pulled out it was to make room for Woods but Goosen’s place was filled by SKY Sports Golf commentator Rich Beem and 18-year-old son, Michael who has caddied for his PGA Championship winning father.

Woods stated last week, in his first news conference since the events of earlier this year, his comeback would involve a ‘few events each year’ and also stating: “I’ll put it this way, as far as playing at Tour level, I don’t know when that’s going to happen”.

Those remarks, and with Woods indicating he was not even half-way through his recovery, would seem to rule out the sight of a scorecard in his back pocket next week in suburban Orlando.

However, in Woods’ next sentence he commented: “Now, I’ll play a round here and there, a little hit and giggle. I can do something like that.”

Woods was then a guest of NBC TV during Saturday’s coverage of his event and was asked about being spotted on the Albany range hitting the driver.

“I can now hit the driver but it just doesn’t go as far,” said Woods. “The power is not there but I can hit drivers. I can hit every club in the bag. Unfortunately… I am up to the point I hear it land (laughing).”

And asked if he felt he was taking a risk in his recovery process if using the longest club in his bag Woods said: “It has before but if I go at it about, what I would say, my old speed, yes it is.”

“We work with all the injured warriors and you know how they are, as they are a strong bunch of guys and to know … I was close to losing a limb,” said Woods. “I didn’t lose a limb, so I was very lucky in that regard and I still have a lot of work to do. I’m still grinding and still doing all my PT and still working hard.”

If Woods doesn’t tee-up next week it was clear from other comments last weekend with the headphones on and all wired-up, he may have a career joining ‘Beemer’ as a TV analyst given his commentary.

Here are some of the best lines from Woods who was sandwiched between David Feherty and Steve Sands.

“One of the advantages he has is that when he gets into a bunker, he has so much more leverage. Bryson can create so much more spin and angle than we can but some of his shorter shots are a little more difficult with a shaft that long.”

Tiger on his work at the 25th anniversary of his TGF Foundation:

“I was lucky enough to have two great parents and to have the support I had to do the things I did in school and then attending Stanford University, and playing golf there was fantastic. Now, not a lot of these kids don’t have parents and a lot of the kids who come through our learning labs that are STEM programs don’t have access to computers and for them, they’re behind the curve and we’re giving them the access and opportunity then all of a sudden you see amazing growth. To see them blossom and then go off to major universities and see them go back to their own communities, and then give back to the communities where they grew-up, is fantastic.

“While it’s true we have now affected more than two million people it affects many more than that, like the communities in which they grew up and they show the leadership they’ve learned in how to develop. It’s just amazing. It’s only two million now but we are still working on growing that number.”

“It started as a golf foundation and then when 911 happened it all changed. I changed the Foundation and how we looked at it. How I was raised was always family, school and sports. So, why would we have sports ahead of academics so we flipped it.

“STEM (Science, Technology, Engineering and Mathematics), at the time was the way the future was going.  When I was at school I was trying to major in Econ’ so I thought STEM was the right way to go, and then the world flipped post 911 and it is now all STEM based.

“To have now more than two million kids affected by STEM, as the world grows and expands, is flattering and to hear these kids and the excitement in their voices is humbling when they come back and tell their own stories, and also be so thankful and the mentorship of all our board members have given them throughout all these years.

“Man! To hear their stories, it brings you to tears. I have a mentee right now that is graduating from Stanford. His family only made $42,000 a year as a family but he just got a job with just over $200,000 a year plus equity now working for Google.”