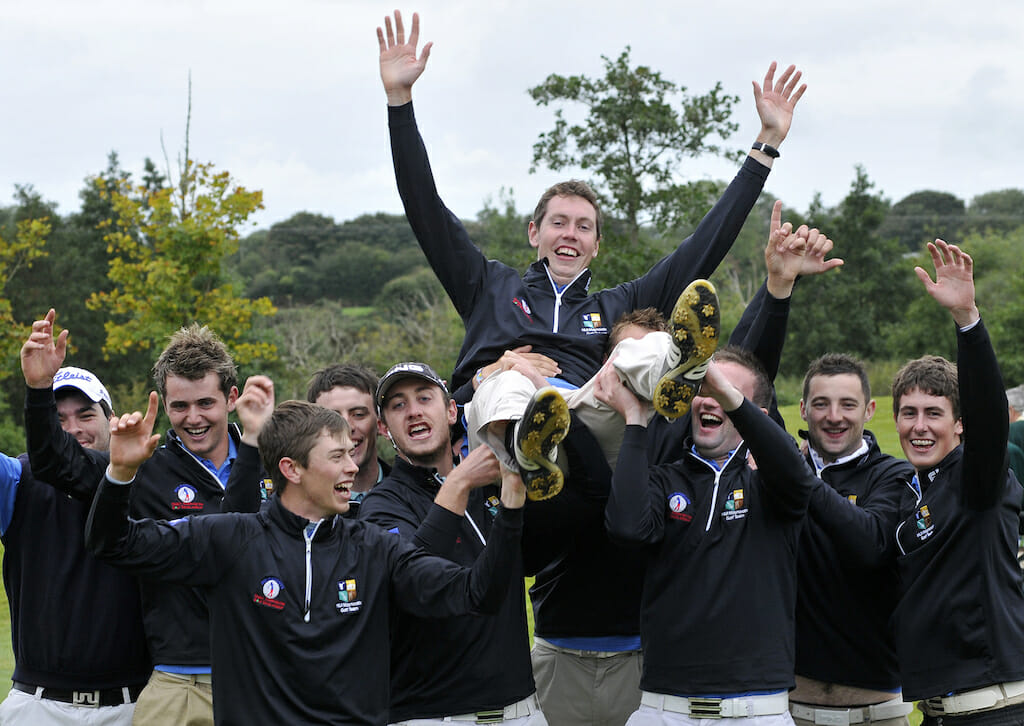 Barry Fennelly (Team Manager) is raised by team and panel members of the NUI Maynooth Barton Shield team after their victory over Banbridge in the Chartis Europe sponsored Barton Shield at Kinsale Golf Club.20/09/2012. Picture by Pat Cashman

Maynooth University’s Barry Fennelly admits it’s a real honour to be named as an Assistant Coach to the International team ahead of the 2022 Arnold Palmer Cup at Golf Club de Genève.

Ryan Potter of Wake Forest and Bill Allcorn of Oklahoma will serve as the United States assistant coaches while the International assistant coaches will be Golda Borst of Kentucky and Sweden and Fennelly. Longtime Arnold Palmer partner Rolex is continuing its more than 50-year relationship through its support of the matches, which will be hosted by Golf Club de Genève July 1-3, 2022.

“I am thrilled with the call up to be involved as an assistant coach with the APC International Team,” said Fennelly, who’s in his 11th season as Head Coach of both the men’s and women’s programs at Maynooth University.

“It is an honour to be involved in such a prestigious International event that is associated with Mr. Palmer. I am hopeful now that some of our leading male and female Irish collegiate players go on to qualify for the team for Geneva which would be fantastic.”

Under Fennelly’s direction, Maynooth has become the perennial leaders in Ireland, having won two National club titles and numerous Irish, British and European University titles. Fennelly has worked with three Maynooth men who have gone on to win The R&A Foundation Scholars Tournament, which is highly regarded as the leading collegiate tournament in Europe.

“On a personal note, I am immensely proud and indebted to the players who have represented Maynooth University with distinction at the Arnold Palmer Cup over the years,” Fennelly added.

“In total, we have had five Maynooth players compete in the event but remarkably this has resulted in seven representatives in the last nine Arnold Palmer Cup matches, a feat not matched by any institution outside of the United States.”

The Arnold Palmer Cup was co-founded by Arnold Palmer and the Golf Coaches Association of America (GCAA) and began at the Bay Hill Club & Lodge, Orlando, Fla., in 1997. The event is a Ryder Cup-style tournament featuring the top men’s and women’s university/college golfers matching the United States against a team of International players. The Palmer Cup has been played at some of the world’s greatest courses including The Old Course, The Royal County Down, Royal Portrush, Baltusrol, The Honors Course, and Cherry Hills. Beginning with the 2018 matches at Evian Resort Golf Club, the Arnold Palmer Cup is the only major tournament which features men and women playing side-by-side as partners.

Since its inception, over 125 former Arnold Palmer Cup alumni have gone on to earn cards on the PGA, European, or LPGA Tours; 32 have represented Europe or the USA in the Ryder Cup, Presidents Cup, or Solheim Cup and more than 60 have claimed over 280 victories on the PGA, European, or LPGA Tours, including three major champions in both 2020 and 2021. The United States leads the Palmer Cup series 13-11-1.