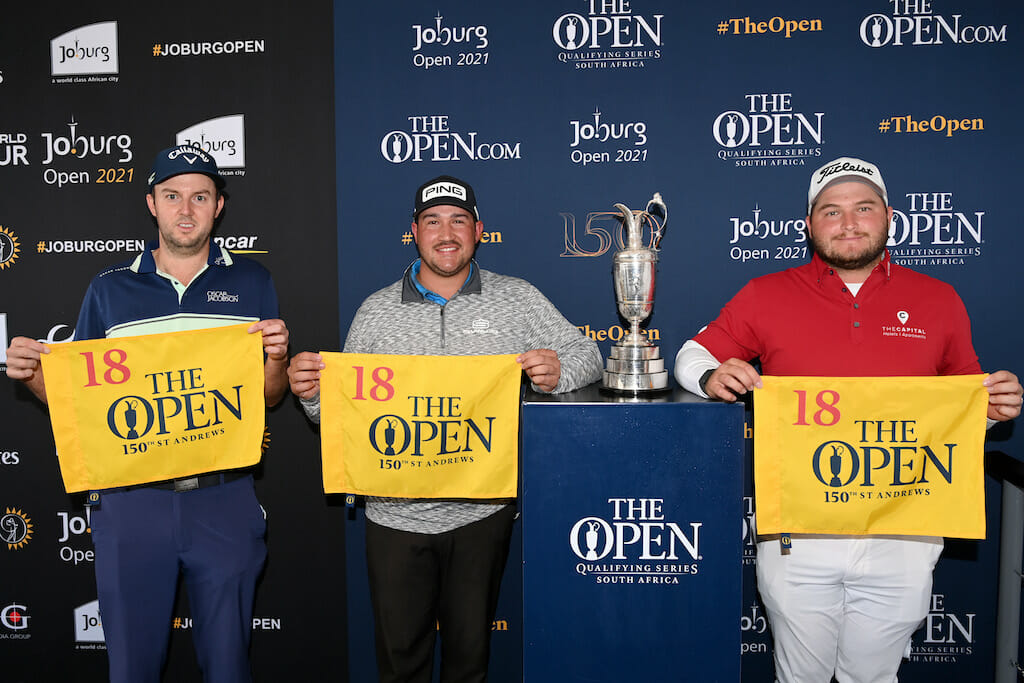 Ashley Chesters of England, Thriston Lawrence and Zander Lombard of South Africa all booked their place in the 150th Open (Photo by Stuart Franklin/Getty Images)

Englishman Ashley Chesters’ decision to remain in South Africa has been rewarded with a 2022 Open Championship tee-time at the close of the severely weather affected Joburg Open.

Chesters, 32, could have easily joined nearly 20 other British and Irish golfers and flee the Rainbow nation when word spread that South Africa and four other African nations were being put on a ‘red list’ of travel countries, with the UK Government issuing a virtual Covid-19 ultimatum that unless those arriving from those five countries were not back in the UK by midday last Friday, they would have to undergo a mandatory 10-day government managed hotel quarantine.

Chesters had been in contention at last fortnight’s penultimate European Tour event of the season until a third round 74 spoiled his chances of a maiden Tour win at the AVIV Dubai Championship.

The Shrewsbury golfer was not into the season-ending DP World Tour Championship but no doubt thought his game was good enough in heading to the South African capital.

After finishing joint third behind South African Thirston Lawrence, Chesters will be heading next July to a third Open Championship appearance and a first since 2015 given South African Shaun Norris, who was tied with Chesters at seven-under par, was already exempt into the 150th Open.

Chesters had been among five British players who elected to remain in Joburg including Scotland’s David Drysdale who shared 23rd place at two-under, though he and his caddying wife, Vicky were always going to remain given the couple’s intention to spend Christmas in South Africa.

It’s not sure what Chesters’ plans are, given this coming week’s South African Open is now just a purely Sunshine Tour event and if it means a 10-day mandatory quarantine, it could all be worth it knowing he’s into golf’s oldest major.

No such concern for Lawrence who grabbed his first win in just his 22nd DP World Tour event, having made just six of 21 cuts and a prior best finish of 17th..

He arrived in Johannesburg as an affiliate member but after adding to his Sunshine Tour victory at the 2019 Vodacom Origins Stellenbosch, he now has a DP World Tour exemption until 2023 and naturally moves to the top of the fledgling DP World Tour Rankings in Partnership with Rolex but with 75% points awarded for a 36-hole win.

“It’s so surreal,” he said. “I don’t think anyone thought it would turn out this way, to finish on a Saturday afternoon but I’m just really thankful. It’s a life-changing moment for me.

“I had my card on the Sunshine Tour but I really wanted to move on to the next step. It happened so quickly. There’s a lot of things that could happen next year. You know you’re on the Tour and you don’t have to worry about invites and it gives you a lot of confidence.

“You don’t get these opportunities often. I’ve had four years of co-sanctioned events so you build up experience but it’s just unbelievable.

“It’s been a goal, you want to see yourself up there but the last year and a half of Covid it’s been tough so you sort of see your dreams fade. For it to change this week is unbelievable.”