LPGA celebrates a year of success after so much uncertainty 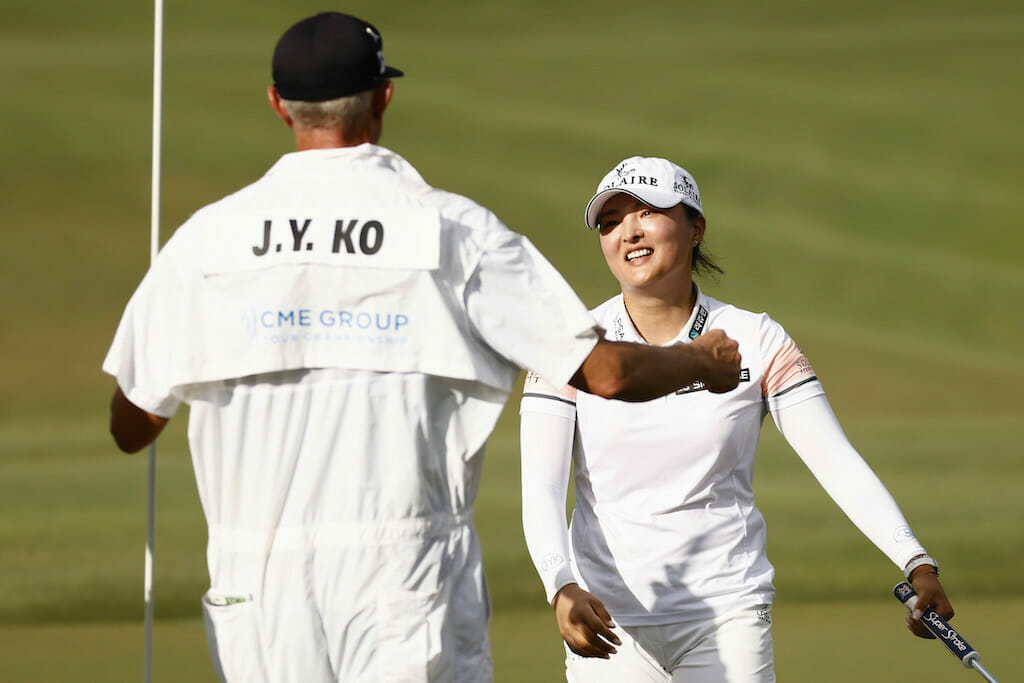 After a year of stops, starts and long stretches of global travel, the 2021 LPGA Tour season came to a sensational end at the CME Group Tour Championship, a true celebration of the best female athletes in the game of golf.

With her victory at the CME Group Tour Championship, Jin Young Ko won her second Rolex Player of the Year title, joining 2019. She is the 14th player in Tour history to win the award at least twice and the first player from the Republic of Korea to win more than once. It was the culmination of a season that saw Ko earn five LPGA Tour titles, including the $1.5 million win at the season finale, and eight additional top-10 finishes. Nelly Korda, who took four wins in 2021 along with six additional top-10 finishes and the gold medal at the Tokyo Olympics, finished second.

Ko’s win at the CME Group Tour Championship also gave her the title of Race to the CME Globe Champion, after she also won the title in 2020. She is the first player to win the season-long race more than once.

The Thai native became a Rolex First-Time Winner at The Chevron Championship, becoming the first Tour rookie to win the major title since Juli Inkster in 1984. In addition to her win, Tavatanakit notched nine top-10 finishes, including a tie for fifth at the KPMG Women’s PGA Championship and a tie for seventh at the AIG Women’s Open.

“I knew that my potential was there. I just needed to figure some stuff out to put it together and finally close it out, which I did when I won our first major at the ANA Inspiration (now The Chevron Championship),” said Tavatanakit. “My entire outlook changed because I had proven to myself that I belong out here and I have what it takes to win on the LPGA Tour, not only that but a major championship.”

Madelene Sagstrom received the Heather Farr Perseverance Award, which honors an LPGA player who, through her hard work, dedication and love of the game of golf, has demonstrated determination, perseverance and spirit in fulfilling her goals as a player. In February, Sagstrom told her #DriveOn story of overcoming childhood sexual abuse and learning that “survivorship is a continuous process.”

“I have received many awards both for my athletic ability and my performance on the golf course. This is the first award I’ve received for being me,” said Sagstrom. “For a long time, I based my self-worth on my results on the golf course. I have worked for a long time to see and honour the other sides of myself. This is why this award means a lot to me. It’s been a lot of hard work and I’m just so happy to stand in front of you guys as the person I am today.

“My goal every morning when I wake up is to be the best version of myself, both as a golfer but most importantly as a human being. Deciding to speak about my sexual abuse story means just that for me. I hope that by sharing my darkness, I can bring some light and hope into somebody else’s life. As we all know, life isn’t always easy. But together as human beings, we can be there for each other. Thank you all for showing me that my story is important and for showing others that they’re not alone.”

Lydia Ko received the 2021 Founders Award, an honour previously known as the William and Mousie Powell Award and now named in honour of the LPGA Tour’s original 13 Founders. The award is given to an LPGA Member who, in the opinion of her playing peers, best exemplifies the spirit, ideals and values of the LPGA through her behaviour and deeds. The award has been given out since 1986, with a list of previous recipients that includes Kathy Whitworth, Nancy Lopez, Pat Bradley, Betsy King, Juli Inkster, Lorena Ochoa, Chella Choi, Juli Inkster, Karrie Webb, So Yeon Ryu and Brooke Henderson.

“I’m extremely grateful knowing that this award was voted by my fellow peers on the LPGA,” said Ko. “In my eight years on Tour and playing against the best female golfers, I’ve been so fortunate to have met so many friends, mentors and people I will know for the rest of my life. Even though we are all competing against each other, one of the greatest attributes of our Tour is that we genuinely support one another. We’re here to grow as professionals and people. This allows the Tour to continue to inspire the future generation of young women and inject them with the inspiring vision and spirit of the Founders. The LPGA is much more than an organisation, but a family.”

Following Sunday’s completion of play, Ko also earned the Vare Trophy for the season’s lowest scoring average. Ko averaged 69.329 strokes per round in 2021, with Lexi Thompson coming in second at 69.629.

LPGA Commissioner Mollie Marcoux Samaan, celebrating her first Rolex LPGA Awards after being named to her position earlier this year, selected LPGA and World Golf Hall of Fame member and long-time LPGA and PGA Tour announcer Judy Rankin as the recipient of the Commissioner’s Award. The award, introduced in 1991, honours a person or organisation that has contributed uniquely to the LPGA and its Members, furthered the cause of women’s golf, and possesses character and standards of the highest order. Past recipients include KPMG, Jamie Farr, Rolex, the J.M. Smucker Company and Golf Channel.

“I’ve seen Tiger (Woods) from the beginning to not so long ago. I saw Nancy Lopez up close and personal and then in television. I saw all of Annika Sorenstam’s career. I saw all of Karrie Webb’s career and I could go on and on and on. But I guess I’ve had the best front-row seat ever,” said Rankin, who will step back from full-time announcing in 2022. “The LPGA has been my neighbourhood and I love this neighbourhood. I’ve been really fortunate to have a second chance after being a player to spend so much time out here and to be friends with young players. It has really been extraordinary for me.”

Deb Vangellow, a LPGA Master Professional and Director of Golf Instruction at Riverbend Country Club in Houston, Texas, joined an elite group of her peers as the recipient of the 2021 Ellen Griffin Rolex Award. Instituted in 1989, the award honours the late Ellen Griffin, the best-known woman golf teacher in U.S. history. The award recognises an individual, male or female, who has made a major contribution to the teaching of golf and who has demonstrated, through teaching, Griffin’s spirit, love and dedication to the golf student, teaching skills and game of golf.

“Thank you so much to Ellen Griffin. Her incredible teaching spirit while never forgetting that she was always teaching people and to allow the frustrations of golf to be overcome by fun was really instrumental to me, from being a young teacher to this day,” said Vangellow, a former national president for the LPGA Professionals.

Earlier in the week, the LPGA Tour celebrated the winners of two season-long competitions. Hannah Green captured the Aon Risk Reward Challenge and earned the $1 million prize. The competition, which measured the performance of LPGA Tour and PGA TOUR golfers on a series of holes across multiple tournaments, tested players’ ability to analyse risk, utilise data-driven insights to identify opportunities and maximise performance in the moments that matter most. Green joined PGA TOUR winner Matthew Wolff in taking the Aon title, with both players receiving equal prize money.