Tiger gave me the greatest comeback in sport. I don’t need another 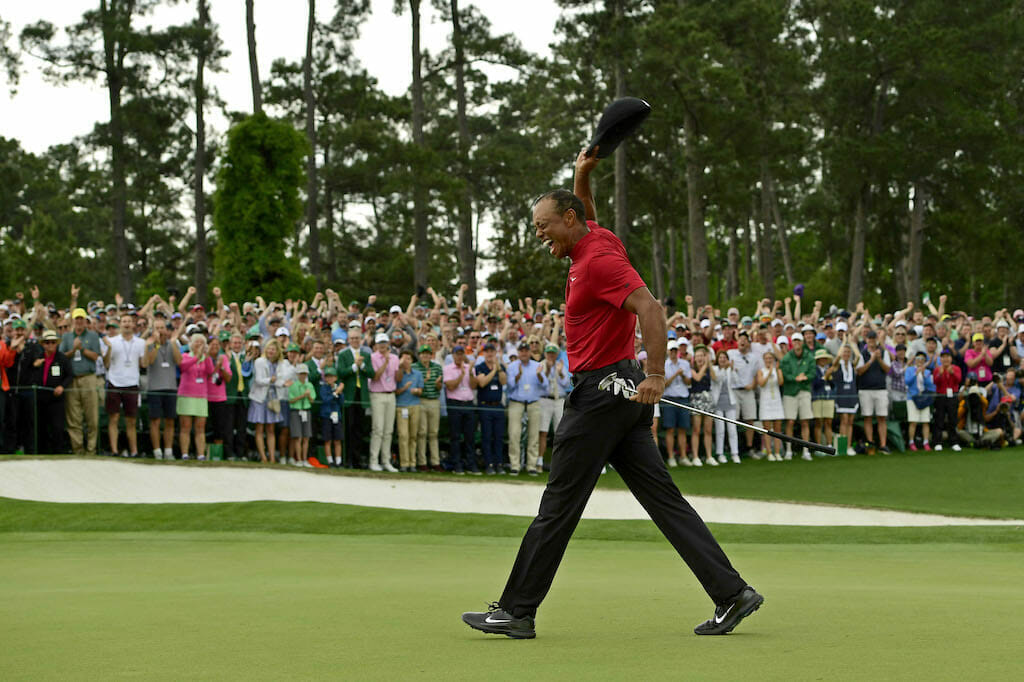 For Tiger Woods, and for adidas, impossible is nothing. Conflict of interest there? Feck it, Just Do It…

Tiger Woods has been creeping back into my newsfeed of late, seemingly on the road to recovery after February’s near-death disaster in his SUV. It’s been 25 years since the TGR Foundation was first set-up. 25 years since he recorded his first PGA Tour win and there’s only a couple of weeks to go until the man himself will host a limited-field Hero World Challenge in the Bahamas from December 2-5.

Whether or not Tiger will make an off-course appearance at the tournament remains unclear, as does any possible date for a playing return. Rumours abound, will he, won’t he whispers of possible new year dates, not least another trip down Magnolia Lane. Many people wrote off his chances of ever winning a 15th Major. Even in his current state, they won’t make the same mistake again, but the purpose of this article isn’t to hype up another Woods comeback. The GOAT owes the game nothing, me included, having already given us perhaps the greatest comeback tale sport has ever seen.

To properly paint the picture you need to dive into the evolution of Woods, the man who literally changed the game. People both familiar and unfamiliar with golf came from far and wide to see this phenom in action. Woods was athletic, powerful, cool. A gym-junkie when few golfers bothered. He worked hard for his advantages, and there were plenty. But that hard work came at a cost.

Woods’ intense military training and weight-lifting, coupled with his aggressive action were often cited as the main contributing factors to his back injuries, but whatever about the origin story, 2014 is when the full extent of Tiger’s damaged back really came to light.

An eight-time winner at Torrey Pines, the warning signs were blinking when Woods shot a third round 79 at the Farmers –  his worst score on American soil and one that saw him fall short of making the final round at his season-opening event.

Then, after an outward half of 40, Woods would withdraw on the 13th green during round three of the Honda Classic, citing back spasms, before he would grimace his way through a final round 78 at the WGC-Cadillac Championship a few weeks later.

How much trouble was Woods in? Enough to miss April’s Masters Tournament for the first time in his pro career, however the true extent of his agony is perhaps best told by a story in Jeff Benedict and Armen Keteyian’s ‘Tiger Woods’ biography, released in 2018.

It was the day after that final round 78 at the Cadillac, Woods out chipping balls at his back-yard practice green, trying to keep the spasms at bay. He played one patented flop-shot over a bunker too many and by the time he finished the swing, Woods was laid out on his back, unable to move.

The pain was so excruciating that Woods could hardly breathe. Lying there, helpless, it wasn’t until his seven-year old daughter, Sam found him that Tiger could call for help:

“Can you go tell the guys inside to try to get the cart out to help me back up,” Woods asked.

“My back’s not doing very good.”

Yes again, Sam, can you please go get those guys?”

Far from simply fearing for his golf career, Woods’ home life was gravely under threat from his ailing back. He struggled to get out of bed regularly. Found it almost impossible to physically pick up his kids. Copious scandals, tales of adultery and that infamous fire-hydrant had already torn down the cloak of invincibility around Woods, and yet remarkably, the worst was yet to come.

Images of a road-side cop pulling Woods over for dangerous driving beamed pictures of a scarcely recognisable then 14-time Major winner around the world for all to see. Woods, the supreme athlete, could barely stand. He couldn’t tell the officer if he was coming or going. The walls were caving in around the once mighty Woods. His private life in tatters. His back following suit. He couldn’t come back from this.

Fast-forward to September 2018 and the sight of Woods, fused back together with club in hand once more, prowling in Sunday red at the Tour Championship as throngs of fans jostled for position to picture him win, proved just the shot in the arm our great game needed.
It provided the shot in the arm Tiger needed, too.

The apex predator returned to Augusta in 2019 with the taste of victory fresh on his lips. Even the fact we could speculate about a 15th Major was remarkable in itself but when Woods put himself in position on that fateful Sunday, and the roars rang through the pines courtesy of that unique Tiger chorus, suddenly the clock rewound to those all too familiar days when names buckled under the weight of Tiger’s presence until all that was left was for the great man to hole the winning putt. 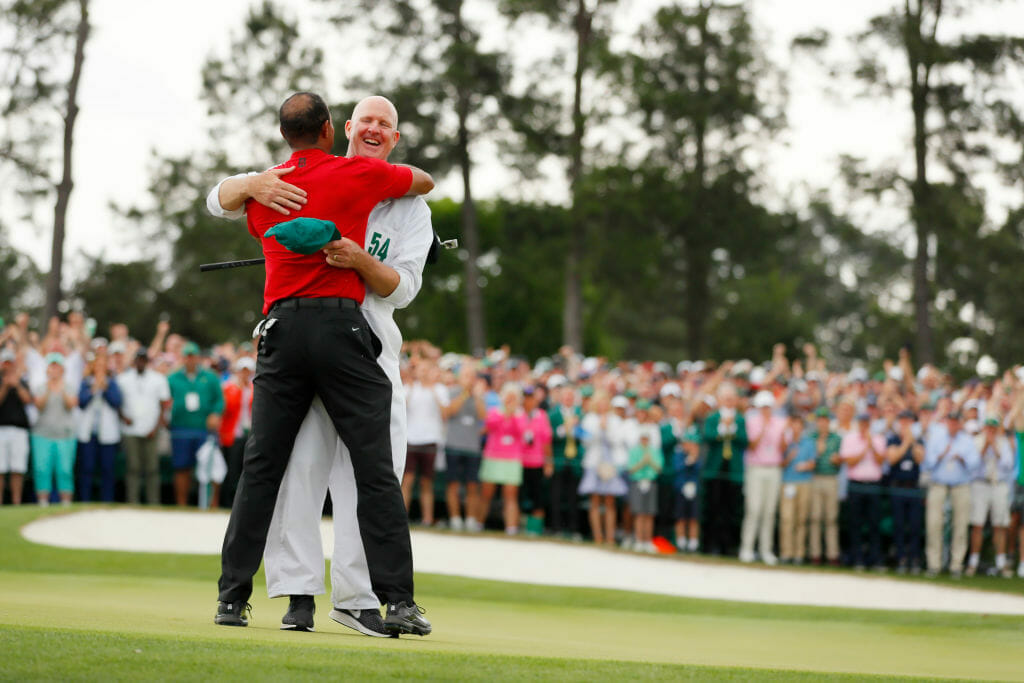 It’s certainly the greatest sporting comeback I can remember. Some will say Niki Lauda racing again six weeks after coming out of a coma with horrific burns trumps it. The Netflix documentary series ‘Drive to Survive’ depicts Lauda’s courage brilliantly – apologies that that’s my only frame of reference.

I was only six years old when Monica Seles slammed her way to victory at the Australian Open in 1996 just three years after being stabbed in the back on court but she’s certainly another worthy candidate for greatest sporting comeback ever.

And surely boxing’s greatest, Muhammad Ali must be up there too, returning to the ring having had his prime years stolen from him for refusing service to the Vietnam War, only to come back seven years later and reclaim the heavyweight crown?

For Woods, his isn’t even the greatest comeback in golf. Ben Hogan takes that honour, having come back from a near fatal car crash of his own to win the US Open not much more than a year later. The story goes that Hogan leaped to his wife’s aid as an oncoming bus hammered into their vehicle. While his wife was somehow uninjured, Hogan’s injuries looked bleak; a broken pelvis, collarbone, ankle and ribs amongst the debris. It was a miracle Hogan survived, let alone win another six Majors.

Tiger got lucky with his car crash in February 2021 by comparison. It was his own doing, but it shouldn’t be his undoing. Woods underwent successful surgery on open fractures to his right tibia and fibula bones. He’s been pictured walking the golf course in recent weeks. He still retains the fire to compete, and having been written off many times prior to winning the Masters in 2019, nobody would be so foolish as to write him off now.

“You never give up,” Woods says. “That’s a given. You always fight. Just giving up is never in the equation.”

I’ve no doubt Woods will attempt a comeback. Whether or not it’s as successful as the last one doesn’t worry me. 2019 was more than enough. It will live with me forever.