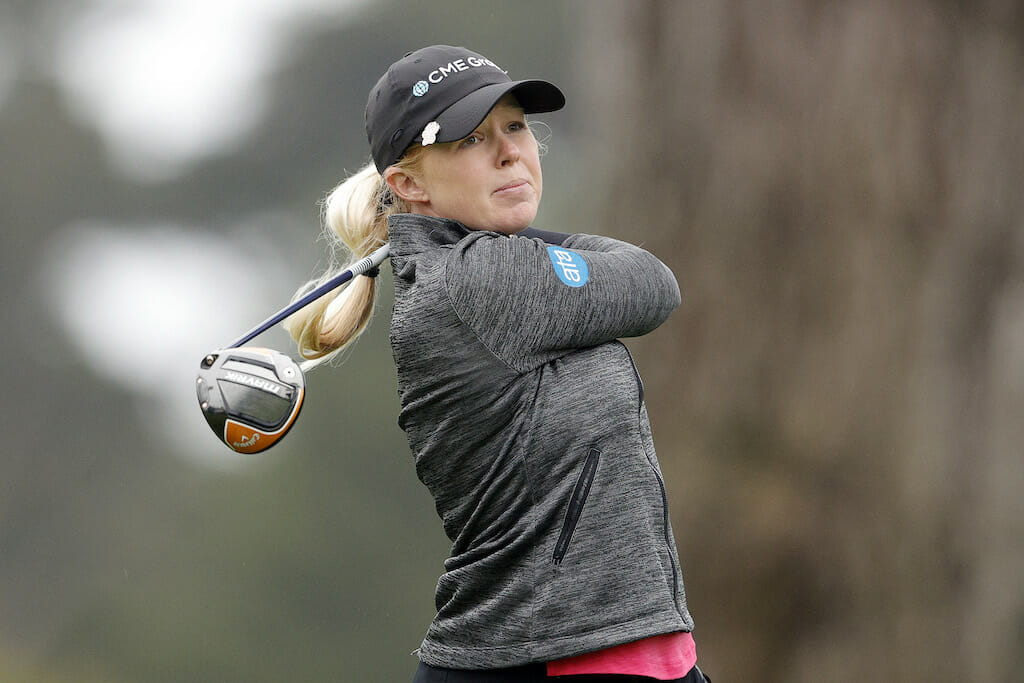 In and no more, Stephanie Meadow will be back on the LPGA Tour next season after being the last woman to retain her playing rights for 2022 at the Pelican Women’s Championship in Belleair, Florida.

The Jordanstown ace needed to finish inside the top-100 in the Race to CME Globe after the final regular season event to secure her full status for next year and she did just that – finishing 100th!

Starting the final day in 99th in the projected points list, and 41st on the leaderboard in Florida, Meadow battled through a double-bogey on the second – her 11th hole – and then left herself with a nervy wait after a bogey at the eighth consigned her to a level-par 70 in her final round.

At four-under for the week, it had her down in 47th and on the verge of dropping out of the top-100 in the order of merit, which would have left her needing to go through Q-School to earn her Tour card for next season.

But, fortunately for the 29-year-old, none of the players around her could make enough of a push late in their rounds, and the top-50 finish in Belleair ultimately was enough to let her start planning for 2022 knowing she has guaranteed status wrapped up.

This is the second time Meadow has retained her Tour card in the final regular season event of the year having produced a superb final round at the Volunteers of America Classic two years ago, finishing sixth and sneaking inside the top-100 at the death.

Meanwhile, closer to the top of the leaderboard it was a disappointing final round for Leona Maguire as her worst round of the week by some distance, a five-over 75, dropped her well out of contention to end her wait for a first LPGA title.

It had looked like this could be her week after a course-record 62 on Thursday, and she was still in touch just one back after a 68 on day two, but another 68 on Saturday saw her fall four shots adrift before she imploded in her final round to drop outside the top-25.

After bogeys at the first and fourth, either side of a birdie at the third, a double-bogey at the eighth was the death knell to her title aspirations, and two further bogeys on her back nine – coming at the 15th and 17th – were simply salt in the wounds.

Maguire will now have to pick herself up and try to recover to launch a bid for the Race to CME Globe title at this week’s CME Globe Tour Championship, with the Slieve Russell ace coming into the event 17th in the points list.

Nelly Korda continued her outstanding year with her fourth title of the season, the World No.1 triumphing in a nail-biting four-way play-off in Belleair to lift the trophy and move up to second in the Race to CME Globe standings after an unforgettable finish – although nearly for all the wrong reasons.

The 23-year-old had held the overnight lead alongside Lexi Thompson and finished the tournament with a 69 to reach 17-under, which was matched by the same score from playing partner Thompson, although both players blew chances to win it outright.

Korda had held a comfortable lead with two holes to play but triple-bogeyed the 17th, while Thompson missed two four-footers for par to card back-to-back bogeys to finish, allowing Lydia Ko and defending champion Sei Young Kim to tie them in the clubhouse with rounds of 66 and 67 respectively.

But Korda shook off that disappointment to triumph in the shootout, although Thompson once again had her putting to blame for ruining her championship hopes.

With Ko and Kim both out of the running on the first play-off hole, Korda impressively drained an 18-footer for birdie and her rival couldn’t follow her in from just six-feet, handing the World No.1 yet another trophy for the cabinet in a glittering year.

“It was just the whole entire hole honestly. It was like, ‘okay, I need to get off this hole’. I told (caddie) Jason (McDede), ‘thank God we’re not playing 17 in the playoff,” Korda explained of her penultimate hole meltdown.

“I just tried to shake it off. I was pretty upset. There were definitely some R rated words going through my head and probably out of my mouth.

“The nice thing about Jason is I can kind of vent to him and he takes it. It’s not directed at him. It’s just I can vent and get it all out, and then I can focus up. He tells me positive thoughts now that everything is out in the air, and go after it.

“I mean, it’s a crazy game and I never give up. Even though I say I think I lost hope, I will never give up. I’ll go down fighting every single time.”

A devastated Thompson summed up her thoughts by looking at the positives, saying: “Had an amazing week. Played solid golf. So many players played amazing golf, Nelly as well, obviously. Just wasn’t meant for me in the end.”